Off Grid House at Delhi, by UnBox. Design

The house is designed to comfortably accommodate three families over 4 floors, 2 single level homes and a duplex, with careful consideration given to climatic conditions and comfort factors. Its form is generated as a response to the site, its orientation, the client requirements to build to the maximum permissible envelope of the site and the local building bye-laws.

Neighbourhoods in Delhi are witnessing a transition in the social fabric as well as housing typologies and their architecture in the face of rising population and rapid urbanization. The former trend of spaced out single family dwelling units has now been replaced by multifamily apartment units. These are predominantly executed through the profit-driven ‘developer model’ that emphasises on the maximization of built area and provision of a generic template of amenities. This one-size-fits-all approach often leads to mass production of banal masonry boxes comprising of repetitive plans and facades, mostly devoid of context and disconnected from their respective neighbourhoods. Such a pattern contributes to a static, one-dimensional representation of contemporary architecture vocabulary in the city wherein flamboyance is perceived as an index of determining the value of apartments while functionality and user sensitivity are often discounted.

Our client, an upcoming young developer came to us with a brief for a multi-family dwelling situated deep within the banality of visual noise in one such congested yet sought-after neighbourhood of Central Delhi.

The site is a two-side open plot, in the front a primary approach road offering the only views to a single full-grown tree and filtered views to a small community park behind. The house is designed to comfortably accommodate three families over 4 floors, 2 single level homes and a duplex, with careful consideration given to climatic conditions and comfort factors

An in-depth study of the surrounding houses in the neighbourhood revealed how the single-family houses were carefully planned to incorporate natural light, ventilation, views and an overall sensitivity to their surroundings, whereas the present-day “apartment block” is being built mostly as a transaction between a developer and a desperate homeowner, often devoid of ample natural light, ventilation and a complete disregard for the streets they abut. This reinforced the drive to revisit simple, honest architectural principles and explore if they can create a higher quality of life for these multi-dwelling units.

The form of the house is generated as a response to the site, its orientation, the client requirements to build to the maximum permissible envelope of the site and the local building bye-laws. The responses to these seeming contrarian requirements were formalised as a simple, clean-lined structure anchored firmly within its context.

The overall mass is zoned into two, keeping mostly the less frequented service areas like staircase and toilets towards the hot south sun. This simple planning allowed to minimize solar heat gained from the exposed south façade during summers while at the same time allowing the sun to penetrate throughout the house at lower angles from the northeast and southwest parts during cold winters. Careful planning also ensured all living and bedroom spaces aligned with the available open faces of the site to maximize penetration of daylight and connection with the surroundings. This in turn reduced the resident’s dependence on artificial lighting during the day encouraging further energy efficiency.

The architectural language of the facade seeks to negotiate the fine line between the privacy of the residents and their relationship to their immediate context. The connections to the outside are in the form of large openings complemented by sheltered terraces. One can notice a set of seemingly sporadically placed columns. These are however consciously placed off the grid from the walls behind. Orchestrating a rhythmic flow of connections, they reveal controlled views from the inside to the outside creating both inward-looking spaces and outward-looking extensions. The architecture thus starts to engage with the street it abuts, allowing glimpses of the street as well as the activities within.

The use of pure and tactile materials translates into a clean, timeless design. With respect to context and tradition, it’s an approach within which the senses, and the physical experience of space, textures and light place the integrity of the user at its core. Functionality, durability and comfort are the prime components of the work, an architectural language not shy to convey aesthetics, but prone to abstain from ‘trends’.

As opposed to the conventional dimensions and usage of doors as access control points, they were designed at a floor to ceiling height. It was aimed to create spaces that were fluidic, devoid of vertical segregation and visual obstructions, thereby creating a sense of connectedness on the floor plate. The doors and windows thus augment the penetration of natural light into the core of the house. For instance, the foyer was the only space without direct natural light source, but it is fairly well lit due to large seamless openings. Similarly, the alignment of the doors and windows indoors and on the front and rear facade further facilitates cross ventilation across the floor plate.

The Off Grid House is our thought-driven attempt to open a line of enquiry towards an alternate approach to apartment design. An approach that is guided by vocabulary capable of its self-identity while simultaneously harmonising with its immediate environment. This project is a humble attempt to emphasize the values of the design process over the face value of the end product. Likewise, we believe several alternate approaches are possible to counter the status quo bias in current residential design practices.

We, at UnBox believe true luxury transcends beyond cosmetic opulence and the actual investment is in the luxury of timeless well-lit and well-ventilated healthy living spaces which are in dire shortage in Indian metropolitans.

Lastly, through post design inquiry it has been brought to light that Off Grid House has gained considerable cognitive prominence, such that it is often referred to as a landmark during wayfinding. Though a modest and chance accomplishment, it truly resonates with the intent of the design process of creating a building that stands out yet is not out of context from its surroundings. 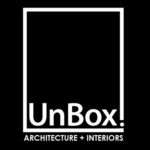