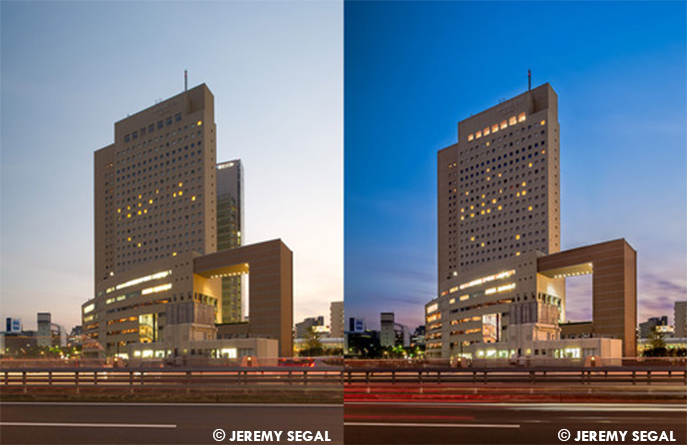 “What is architecture, if not a part of this imperfect, complex and complicated life that we know?” Sudipto Ghosh on Photoshopped Architecture

Curated and Edited by Anupriya Saraswat

Our dialogue on Photoshopped Architecture has traversed across a wide range of opinions and touched upon a whole plethora of factors ranging from the nature of consumer demand to architectural ethos. Sudipto Ghosh approaches this issue from a position that combines philosophy with methodology; he reflects on how our design processes are affected by the visual stimulus we receive from various media, and how those – in turn – create and reinforce standards that are often at odds with realistic outcomes, hence creating a self-propagating cycle of subtle deception in architectural representation.

“The buildings of an architect should belong to life, and there’s a certain amount of imperfection in life which we find attractive, and full of vigour. Then why does it bother us when we find the same in our buildings? Our projects are sites of conflict and contestations, and a design – truly – is a negotiation of these contestations. But we tend to clear our photographs of such complexities. What is architecture, if not a part of this imperfect, complex and complicated life that we know? Where is the representation of buildings which are part of this messy milieu?”

It’s a sentiment that finds resonance in his peers; the architectural community’s increasing disconnect from the complications and conflict of real life has repercussions that go beyond the propagation of duplicitous imagery – it is one that alienates all but the affluent from the profession, and the social relevance of the practice is gradually eroding. Architecture which doesn’t adapt with – and contribute to the place and time in which it is rooted – has little relevance outside of its immediate graphic appeal.

“After a building does get inhabited, that’s where architecture begins; where space, light and people come together. And a photoshopped representation is essentially the evidence of our disappointment with the design not having quite lived up to the expectations of the designer. I believe this is also an admittance of failure.”

But of course, this representation – from the stage of its conception as the embodiment of an idea, to its actual construction – goes through a constant reshaping and fine-tuning, and the imagination not completely matching the reality is almost an inevitability. “There is an imagination of the building before it has actually been built, which allows you to pre-empt issues and conflicts of dimensional geometry,” says Ghosh, “You can resolve these in a digital model before construction, and the 3D visualisation allows you to do it at multiple scales; when you go to site, however, there is always an unexpected surprise – whether negative or positive – irrespective of how you modelled your building, and how well you visualised it. Things shape up quite differently in reality.”

“There are things that photographers do for you, like shooting at twilight. They will go at dawn, or just when the light is starting to fade in the evening, and then take a shot of the building with the lights on… The underlying issue here is that we want to sterilise our buildings – from aberrations and imperfections – and so the twilight shot is great because it covers up a lot of errors and mistakes. But ideologically, this is a problem because you are operating in a world which is make-believe; you are not operating in the real world where you are comfortable with messiness, with things that have not quite come out the way you have wanted them to.”

“This escapism, or wanting to look away from reality, is coming from a certain perspective of what good architecture is… Our magazines show award winning projects of a certain kind – with certain amounts of lighting or certain amount of perfection – which is changing the way we imagine architecture.”

This statement of his captures the essence of the problem; given that the photographic medium cannot completely align itself with how the human eye perceives the world, it is imperative to note that even without any photo-manipulation – whether passive or overt – photographs cannot convey the whole truth of a building. It is not uncommon, in fact, for the photographic vision to not coincide fully with the end-product. “Often times we photograph our buildings ourselves… When we’re through with the first round of photography, we realise that the building somehow appears less than how we had perceived it at the site – I’ve imagined it a certain way, and then we go and see it and it looks a certain way, and the we take a picture of it and looks even more different.”

“This starts another kind of thinking about how I should photograph this building so that I get a little bit more out of it – it’s not really showing all of what we want it to show, so we start thinking about stitching photographs and getting a wider angle and so on. We think of all the methods for conveying our vision, but we do not usually think about how these photographs should correspond to and convey reality, which is what should be happening.”

With the backdrop of inevitable dissonance in place, Ghosh raises an excellent point which helps delineate the ethics of the practice. “I think it’d be interesting to look at what we Photoshop in, and what we Photoshop out of an image… I feel that we shop out wires, aberrations, bad construction, defects in painting – because these don’t correspond to how we imagined the building. And then there are things that we Photoshop in which is more of a problem – like trees, shrubs, lighting fixtures – and that’s something that’s certainly not acceptable, because if you think of something that should go in, then you should have placed it when you were designing the building.”

The discourse rounds back to how the crux of the problem lies in our intent – whether as designer or as photographer – and our integrity. The process of designing is a comprehensive one and the notion of selling a reality which doesn’t exist may have been facilitated with the ease of access to suitable technology, but cannot be blamed upon it. Unless we actively work towards reconciling our artistic vision with practical obstacles – and the ‘imperfect’ buildings that will inevitably come to exist – the issue of misrepresentation will continue to plague us.

Ghosh speaks about how this increasing use of technology – especially in the case of 3D visualizations – affects the design process, the outcome quite contrary to what one might expect.

“So, theoretically, if you have virtual reality where you are able to walk through the building and are able to see everything in absolute detail – including the material, the defects, how the grain differs from one panel to another, the dirt and the grime – then upon seeing it, you would want to change it. I think that’s an interesting premise – because once you’ve seen the building, you want to change something, you want to refine it.”

“It’s just the way we are, and because we want to keep making these changes, design is never frozen in time… we have somehow grown while looking at it, perhaps even outgrown the original idea – I think the closer we get to accuracy in virtual reality being equal to reality, the more we would want to extend the design process. However, in reality, virtual visualisations are in fact shortening the design process.”

He concludes by drawing a very interesting parallel between the two forms of representation — the photograph and the 3D-rendering — and ponders upon its philosophical implications “What’s surprising is that these two have start to look like one another”, he says, “The photograph starts to look like an unreal 3D rendering, and 3d rendering starts to look like photographed reality – with this convergence between the two, one wonders if there is an ideal kind of representation that every architect is looking for, which somehow does not correspond to reality.”

“But I think this little lag between imagination and reality is quite important; maybe the answer lies somewhere in this gap between the visualisation and the actual building.” 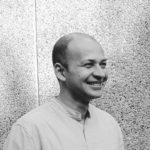 Sudipto Ghosh graduated from the School of Architecture, CEPT, and did his Masters in History and Theory of Architecture from the University of Cincinnati. After working for Dolf Schnebli in Zurich and Richard Meier in New York, he is presently partner at S. Ghosh Architects in New Delhi since 2003. Sudipto also teaches at the School of Planning and Architecture both at the undergraduate and the post graduate schools. His interest in architecture is divided equally between practice and theory. He has lectured across the country and has published widely. In 2015, he co-founded the firm Citywise and produced Delhi’s first integrated public transport map as a pro-bono effort to promote public transport in the city. 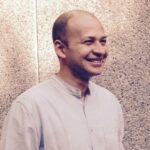