“At the end of the day, it’s all about why” Andre Fanthome on Photoshopped Architecture

“The real question is, in my opinion, if we are even interested in architecture anymore.”

André Fanthome doesn’t pick sides; he addresses the heart of the issue instead, initiating a dialogue that observes and rationalizes rather than predicts and condemns When we reached out to the National Academy Award winning photographer to discuss the deceptive portrayal of buildings in architectural photography, he broke down the seemingly black-and-white issue into a nuanced commentary on ethics, professional necessities, and consumer demand.

Like any other art form, photography is subject to modern sensibilities. The craft supplies what the society consumes, and nowhere is this as evident as in the modern vocabulary of visual media. Contemporary photography has a certain technicolor, surreal feel to it – a distinctly impressionist, larger-than-life view of reality that engages and enraptures.

This would explain why the imagery of shining facades is replacing their more sober, contextually appropriate counterparts. As superficial appeal takes over the inherent architectural value of the building being photographed, the original premise of how architectural photography in particular is a tool for conveying information before an individualistic art stands eroded.

“We have to ask ourselves – do people love the role that architecture plays? Are we amazed and awed by buildings anymore, by delicately balanced structures? [Do we still want] window shades that allow winter sun into the room and save us from the summer glare, or is it easier and faster to build a box and install an A/C with sun-proof, sound-proof windows?… When the experience of architecture is now controlled mostly by programmes that even change the view outside your window, is there really any point in talking of more than the appearance?”

“We need to ask ourselves the motive of [architectural] photography,” he continues, “What is the driving force behind all this communication if not to help the growth of these entities, which can only be fuelled by consumption – when choices are being made while sitting in cozy environments as we flip through media on our laptops and phones. The magazines, too, are dying.”

The remark unerringly hits home; if architecture is essentially being edged out of its experiential status, and becoming mere eye-candy, the artistic view of the conveyer – the photographer, in this case – changes drastically as well. Millennia of vernacular traditions are falling out of favour due to their limited photogenicity,

“Architecture to me is about experiencing the space, not just viewing it as an Image or film. There are two homes in Dharamshala that I visited – mud homes that I have not shot – which would not necessarily look as appealing as our concrete structures with their flashy facades, but about the experience of spaces I could go on and on. For a generation that does not have the time to read the text that accompanies images in articles, how do we celebrate the sustainability of these structures which is more important than their visual appeal? When there is little demand from the audience, how can we expect media that survives on TRP and the resulting advertisements to talk about something no one really wants to read about?”

This isn’t a mere case of changing tastes, but the epidemic of a world which favours aesthetic perfection over the gravitas of substance, our shortening attention spans causing spatial principles fine-tuned over centuries to be left redundant.

What is notable here, however, is that this pursuit of perfection isn’t a new phenomenon; photo-manipulation has existed for more than a century – under the artistic mantle of combination printing, photomontages and elaborate ‘staging’ to create the perfect shot,

“Even in the dark room, photographs have been morphed and joined, and people added and removed well before the digital age. It remained a well-kept secret since the economics of this operation limited its access to but a few rich and powerful, and hence this religion of apparently altruistic photography was established… It was only recently – with the advent of the digital age and the easy access to both camera and inexpensive technology – that this reputation has been corroded.”

Placing this in counterpoint with the current situation, he further expounds upon this ‘corroded reputation’, especially its singular association with Photoshop. Especially given how, often, the use of certain equipment during the shoot produces similar results to what the available software can do for us on a computer – such as in the case of keystone distortions;

“When I had just started working in Delhi, I’d open  my  discussion with architects  with ‘I don’t Photoshop my images’. And over the next few years I saved every penny to purchase all the equipment that would allow me the ability to rely on ‘true photography’ (if there is such a thing). Anyone who’s played with a wide angle lens is all too familiar with convergence that distorts our buildings. This can be easily corrected on Photoshop, [but] I take pleasure in doing this on lens saving time on post processing. Both methods do the same thing, yet which ‘manipulation’ gets the hellfire, you decide.”

Hence – given that several times photography will, more or less, fall short of capturing reality as it is – it is imperative to remember that whether pre-shoot or post-shoot, some form of ‘manipulation’ would be then required to maintain the integrity of the subject as well, especially in the case of inconsequential or impermanent objects on the site,

“For my part, I know when I am hired to shoot that there may be a competition that needs to be won or a new set of flats that have to be sold… There is little sense in not removing an electric cable that was left hanging by the electrician who did a shoddy job, little merit in leaving a car of a rude neighbour who spoilt a frame because he had a tiff with the client.”

What, then, constitutes as duplicitous imagery, and what can be branded necessary aid? Where exactly do we draw the line? It is evident – given its popularity and pervasiveness – that photoshopping will never completely be outmoded. In fact, with rapid technological progress, the distinction between the artificial and the real will only further dissolve.

The issue, hence, becomes one of ethics – of the flexibility of these seemingly arbitrary boundaries, and of intent. As Fanthome points out, the intent to convey information as truthfully as possible is just as important as the intent to create impressive imagery, with selling the product becoming a crucial factor that juxtaposes the two.

“At the end of the day, it’s all about ‘why’. There have been times that my images have been manipulated. But then I too, like the architect, am subject to the focus of the market… It is important, though, that in doing all the manipulation we don’t falsify the visual to tell a different story.”

Fanthome concludes the case by reminding us of the most important factor – the intent to preserve artistic integrity.

“Shots are all about balancing; at times one succeeds, at other times fails – what matters, is trying… There is great joy in waking up at the break of dawn to capture the sky in its royal blue, knowing fully well that I could do it on the computer too.”

And isn’t this satisfaction of accomplishment central to the experiential art of architecture as well? 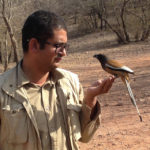 An avid naturalist and experienced birder Fanthome grew up quite literally in a forest village of Eastern Bhutan. After spending an idyllic childhood with pets such as snakes and even  a barking deer, he completed his graduation from St. Stephen’s College, Delhi. His work since then has taken him across the globe travelling to over 30 countries. The youngest of three photographers to have received the National Academy Award for Visual Art, Fanthome now lives in Delhi dividing his time between his commercial work and teaching, making sure to also find the time to improve his cooking.
Andre Fanthome on Facebook / Instagram