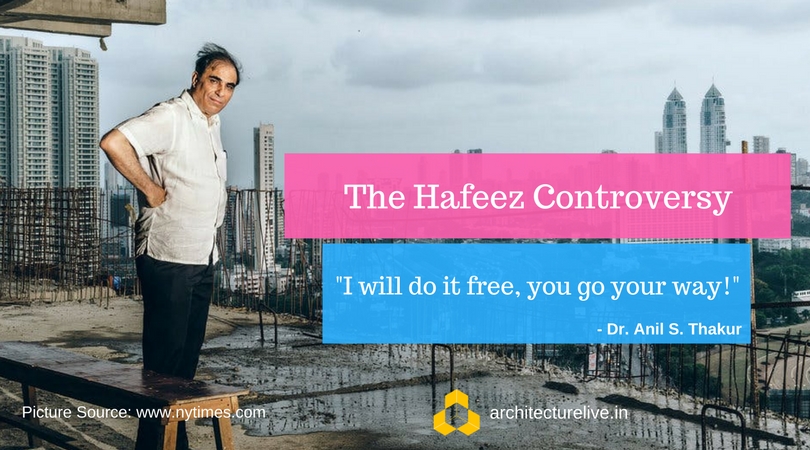 The Hafeez Controversy: I will do it free, you go your way! – Dr. Anil S. Thakur

I wonder why things have degraded and turned so disagreeable. Had Contractor embarked the ethical path, and possessed the scarce merit or the genius unparalleled, the world would have had made his time a very precious commodity. A genuine high projects-oriented mobility for Hafeez would have afforded him a ‘plane ownership’ long ago (what we introduced jovially in the beginning, arguably becomes a potent yardstick of a professional’s indispensability!).

Three decades ago, a naïve and nosy acquaintance visited my office in Chandigarh and asked me point blank who the most successful architect of India was. I spoke of Charles Correa and then of the commercially inclined rising star, Hafeez Contractor. The visitor questioned “Ah ha! So, do they own private planes?”. My reply “most probably not”, as I read on his face conveyed a dismal picture of the profession of Architecture to him. His sharp mind had instantaneously made an impressionistic negative assessment of the power and pelf underlying the profession and the financial prospects of the practitioners of architecture in India. Significantly, he was disappointed with the glamour-less architects and their ‘ordinariness’ in the times when reasonably generous scales, fees, and conditions of engagement prescribed/pre-fixed by the Council of Architecture (COA) were generally followed (especially in the government projects) and only the merits of the architects had to measure up to them. Architectural competitions were held with honesty and sincerity of the purpose and the projects were awarded on the recommendations of the reputed and unapproachable jurists. Today, the situation from the standpoint of the visitor, seemingly, has deteriorated irreparably.

With above as a foreword, I am framing the current controversies raised in the press with stirrers such as “Architect Hafeez Contractor offers to design 19 railway stations for free” (PTI) and “An Open Letter to Hafeez Contractor” (Shubhayan Modak) for a discussion. I declare from the outset that Hafeez & others figuring in these reports are neither my friends nor foes, and I am writing this in the larger interest of the architect community and fraternity.

Since the times of the cited anecdote, I have witnessed a record rise of desperation in private architectural practices in India primarily due to: vagaries of the projects market; shortage of well-trained architects that can be readily absorbed in the industry, and a surplus of a substandard workforce. The project market seems to suffer incurably and inconsolably from unhealthy and unfair competitions, unfair trade and corrupt practices. Moreover, the disregard for merit and ripe experiences of architects in their selection procedures are also destabilising the quality conscious Indian practices. In the end, declining standards of educational institutes and the architectural education that produce deficient workforce are responsible for the poor standards of deliveries and capacities of the practices.

The situation complicates further when we introduce global dimensions into the practice of architecture in India. Here, the concept of plane-ownerships (bespoke travel arrangements) that was introduced light-heartedly in the first paragraph, arguably becomes a potent yardstick for measuring a professional practice’s success in terms of its usefulness and indispensability to the global and ‘globalising’ market. The Success of a professional is also established by the high value the market attaches to his time. Any professional with copious global undertakings and responsibilities will have to be such a frequent flyer, that jet-ownership would become a commonsensical essentiality for him! With that said, however, we should be mindful that the budgets of the global architectural practices (sustained by their multinational operations) that run into billions of dollars are still meagre when compared to the budgets of the cousin global construction companies.

Although the number of jet-ownerships (for professional team travels) amongst the practitioner architects in the developed world (Australia, USA, China etcetera) must have increased by folds since the time of the anecdote, Indian commercial architects like Contractor still seem to be biting the dust instead of bullets! Contractor et.al are now publicly offering their professional services to Indian Railways free of charge for several Metro Stations in Mumbai and elsewhere under the sobriquet ‘service to the nation’. Is that not a disingenuous mixing of patriotism with project hooking, and assuaging guilt with heroism, or subduing disgrace with dignity? Seemingly, the architects’ current ploy (anybody’s guess) is to muster an ‘authority’ by any means (free-designing; pro-bono) for the ends of enlisting favoured building contractors and vendors; and to allocate them works of various station projects etcetera (i.e establishing rights and hidden agenda of sourcing self-sustenance from their kick-backs). In the end Contractor’s flaunty/flashy designs could serve not only as great coverups but also grand displays of his didactic antidote architectural policy to avoid the ‘lousy’. Is this the path Indian practices will follow to resist the globalisation of Indian contemporary architecture?

Desperation hits hardest the younger generation of Indian architects who have little choice but to look-up to the mentioned “free-working pranksters”. As desperations compound, the matters percolate to the bedrock – the legally and constitutionally supported Indian regulatory bodies are attitudinally misplaced to such an extent that instead of rising to the occasion, they start looking elsewhere and make a joke of themselves.

The system regulating the Indian architects’ practice must also come under a scanner. Regulatory bodies have failed to instil discipline, ethics and fear of imminent disciplinary action and possible lifetime debarment for non-compliances in the minds of practitioners. Taking punitive actions against the individuals that defy the legal and constitutional provisions of the Architects’ Acts is incumbent on Architects’ elected bodies and any laxity here reflects on their incompetence to reign-in the offenders. If committees, bodies, councils, chapters fail to secure professional probity and propriety, they must be dissolved, and the organisers made to resign. In case of a ‘reset’, the ethical and pragmatic atmosphere under which the profession, practices and practitioners should flourish would require a ‘neo sacrosanctum concilium’ (a well-guarded monolith build-up of uncompromising professional values of the nature we build in the polio eradication programmes – where any letup (exception) makes all premade efforts go waste!).

It is time for a showdown that warrants the COA to develop feet of steel and put the errant, arrogant and defiant ‘professional stardom’ in its right place.  Additionally, pragmatic ways (e.g a reset) of integrating the profession and its education into global circuits must be developed. Rights of reciprocity and access to levelled playfields must not be surrendered in the process of legitimate opening-up of the profession to the global market(s).

The views expressed in this article are those of the author and do not reflect the official position of ArchitectureLive! in any manner.

Anil S. Thakur is a graduate of the Chandigarh College of Architecture and worked as an apprentice under noted Indian architect Charles Correa (1974-75). Subsequently he worked as an architect and urban designer in India and Kuwait (KEO). He has an accumulated experience of over 30 years in the field of architecture and urban planning. He is a fellow of The Indian Institute of Architects. He received prestigious JIIA- (Journal of the Indian Institute of Architects, Mumbai, India) award for excellence in architecture in 1991 for a prestigious multi-storied project (Central Co-op Bank Complex) that was designed & executed under his supervision at Jalandhar (Punjab, India). Download full CV HERE.