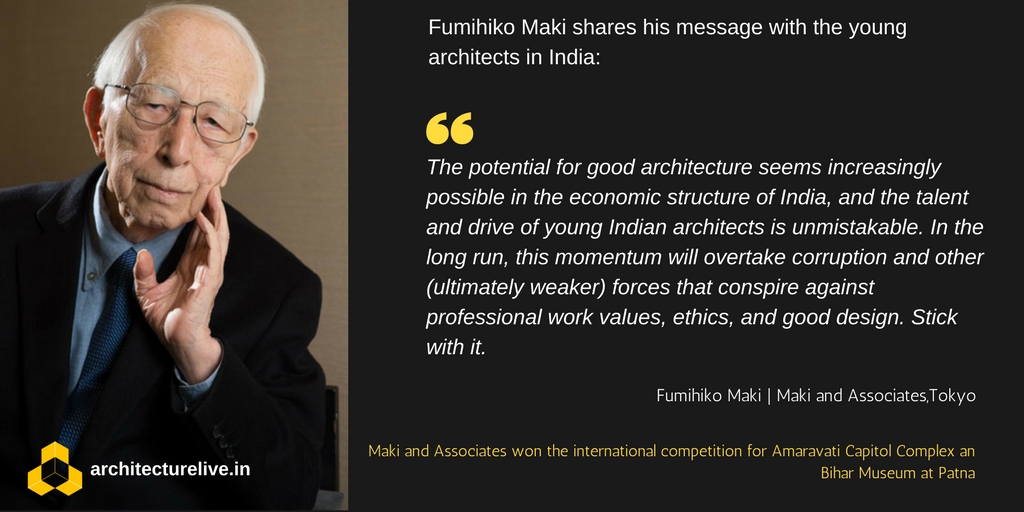 Fumihiko Maki from Maki and Associates discusses his experiences with the architectural competitions in India and also shares his message with the young professionals.

We are discussing the state of architectural competitions in India with the professionals, where they are sharing their experiences and the way forward. In the opening article, we looked at the case of National War Museum, National Police Memorial and Amravati Capitol Complex. In the following post Anuj Mehta and Ankon Mitra shared the similar experiences with the competitions in India.

We got in touch with Mr. Michel Van Ackere, Associate at Maki and  Associates (Tokyo), who shared their experinces with two architectural competitions in India, which their firm won alongwith Opolis Architects (Mumbai, India) – The Amravati Capital Complex and Bihar Museum at Patna. Michel’s responses are below:

AL! – A timeline of events as they unfolded (both Patna and Amaravati).

AL! – Could you share some positives from the competition for the Museum at Patna?

Fumihiko Maki: The architectural selection process for the Bihar Museum was overseen by Lord Cultural Resources, a Canadian consultancy with wide-ranging experience in both museum programming and museum exhibit design. Under the leadership of their Mumbai office, Lord worked with the Bihar state government to ensure that they understood norms and processes of international-grade museums, and norms and processes of international architectural design practices. They made certain that the competition was fairly run, and that the results of the competition were endorsed at the highest levels (by a group that included the honorable chief minister, Nitish Kumar) – prior to releasing the jury report and announcing results to the public (which happened a full month after the competition presentations).

AL! – What was the core cause of contention on the grounds of which the Amravati project couldn’t see the light of the day?

Fumihiko Maki: The stated reasons for termination, as noted in the letter we received from the Government, were as follows:

Every effort was made by our office to address these concerns, all of which were outlined together with a detailed timeline in a letter from Mr. Maki to the Council of Architecture (COA). As the letter makes clear, we found the decision-making process suspect (especially given that all these termination reasons had been criteria for a competition that we had won) – but in any case, we have accepted the decision and wish the best for Norman Foster and his team, the selected new architects from the October 2016 RFP. They have inherited a difficult project and client, but hopefully a great new city results from their hard work.

AL! – Your suggestions on how the situation could have been handled better?

Fumihiko Maki: -Results of competitions should be endorsed at the highest Client level prior to announcing the results. This endorsement presumes that the Client has fully empowered the professional jury and technical review committee to render this judgment, and further implies a promise to protect that professional judgement with the Client’s own power.

-Jury reports should be released to the public, and the public roll-out of competition results choreographed such that everyone – especially the Client – can understand the logic / reason for jury selections. Otherwise, the Client is easily victimized by competing forces outside the professional jury judgement (including internet trolling and corruption) – and the architect can be victimized by a simple change in the will of the Client.

-Competitions should be administered by a neutral, empowered central body (e.g. the UIA or COA) with real authority to ensure that competition winners are given a fair chance to execute the selected design (note: the COA never responded to Mr. Maki’s letter; though the COA did not have any oversight or input on this competition, we found their lack of response surprising, given their role as the representative body for the architecture profession in India ).

AL! – Does this event change your perception towards future competitions in India?

Fumihiko Maki: Following the experience of the Bihar Museum, we believed in the potential for an Indian Client / Government to conduct a fair, well-run, competitive architect selection process. We entered several other competitions run by the Bihar Government – and though we did not win those, it did not change that perception.

Unfortunately, the Amaravati experience has resulted in a far greater reluctance to engage in Indian work. The pretense of an open or even limited competition should not be given if there is no intention to follow through with the selected project. That becomes a waste of time and money – for the architects, the jury, and worst of all (in the case of Government projects) – the citizens. We realize now that our experience in Bihar was an exception, rather than a norm.

AL! – Do you have anything to add to this article?

Fumihiko Maki: Very sorry to hear about the situation at the War Museum; obviously the professional jury’s judgement should be respected and the Client should have been more fully engaged in the selection process. Based on the comments of sP + A, they seem perfectly willing to engage the Client in dialogue and to reassess their competition entry as part of the positive engagement of stakeholders that every architectural project demands. Sadly (and – we might argue – similar to Amaravati) other forces seem to have overtaken sP + A’s own efforts in this regard.

AL! – Any message for the young architects in India?

Fumihiko Maki: The potential for good architecture seems increasingly possible in the economic structure of India, and the talent and drive of young Indian architects is unmistakable. In the long run, this momentum will overtake corruption and other (ultimately weaker) forces that conspire against professional work values, ethics, and good design. Stick with it. 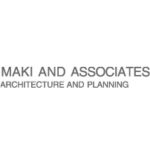