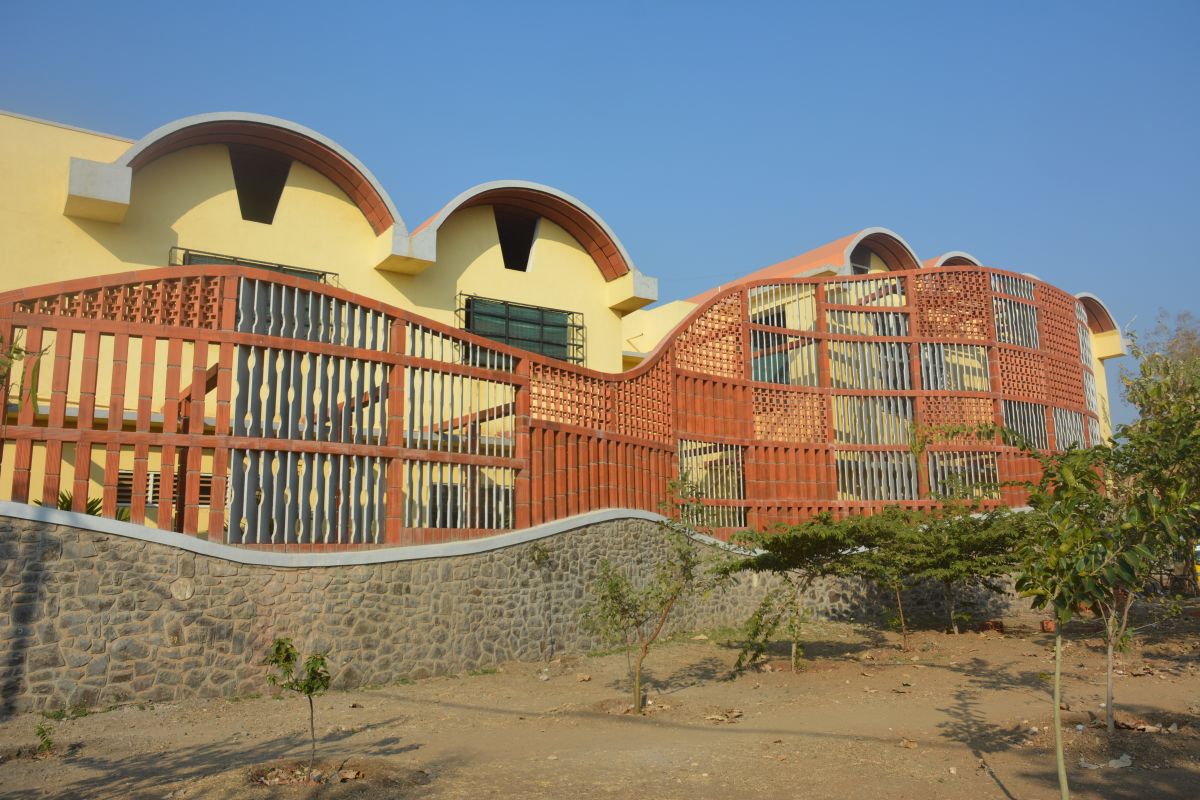 This educational campus is being developed outside Bijapur on Ittingihal road around 8 kms from the centre of the city. The city is catching up in this predominantly grape growing area sitting in hard rock bed of Deccan trap. The Tungal Memorial Trust that is developing this Campus is looking for an exclusive school to nurture scientific talent. A high school from 6th to 10th leading to SSLC and a Science stream of 11 and 12 PUC, would be a predominantly residential campus that is being planned.

The “visual aesthetics” using powerful forms and rich materials aims to use architecture as symbols of power or wealth. It takes clue from art that adorn galleries and museums. This high design architecture tends to achieve that position aiming at visual impacts it can make. That is to be monumental. Everyday architecture on the other hand is essentially purposeful, and could relate to the commonness of local life yet with aesthetics of its own not dominated by visuals alone and need not necessarily be banal or pedestrian. No life is banal. Architecture then can derive its purpose in its engagements with users. Beyond the functional use, as in the height of modernism, dictating spatial organisation, architecture would then employ the quality of materials as well as the methods and techniques of building itself as a basic medium of expression. That is to derive delight from its craft. Brick, stone, RCC, glass plastics or steel as a basic building material for example expressing their limitations and properties of colour, texture, size, shape, thermal quality etc and methods of using them create a multi-pronged aesthetic engagement beyond the power of basic forms. The choice of forms may be a result of the choice of materials and the technique and not the other way choosing a form first and then finding away to create it. Similarly decorative appliqués of craft by itself may not be’ alien bodies’ injected to architecture.

The self-conscious and monumental architecture are symbols of power and delight of elite that often enriches the selective tastes of a society. At the same time, everyday life of ordinary people could also be enjoyable and in spite of repetitive ordinariness can be full of objects, patterns and colours denoting the celebration of life positively engaging them.

Desire for visually strong objects occurs hierarchically starting first above the level of brute survival and graduating higher; like cooking for every day food and for feast or for ceremonious dinners occasionally. Or clothes for everyday and for special occasions and rarely as aristocratic or elite symbol. Can we avoid this trend of consumption and yearning for monumentality on architecture of everyday life at least? Most part of our environment is created by everyday culture and therefore we making that distinction in our approach is important, That is to distinguish from the daily from the imitation of monumental show. At the same time elevate the average to excel.

This also takes us to consider the way the construction is organised. Not just the methods but also its management. Different regions had different ways of organising construction based on the resources available. Skills developed accordingly. However political changes over time and migrations brought different systems along with techniques and forms to the regions. Islamic powers brought arcuated construction techniques to match their forms and geometries, opposed to trabeated ones.. It happened all over the world in middle ages. But we know the superior stone working skills and timber joinery in some places made them adapt it in India to a unique style of architecture. Similarly during British Raj brick laying of a kind and Spanish tiles and trussing etc were introduced to areas where different local tiles and timber spanning methods and mud construction existed. The formal monumental architecture is where these were used first like government buildings or palaces and forts. The industry also moved from informal organisations to formal building firms and contractors. A result of this process was the standardisation of specifications and building technology giving up local traditions and crafts of building. All design elements are frozen and no interaction and innovation at site level possible. This becomes inevitable in large sized buildings but it is still possible to experiment at smaller projects eliminating the formal methods.

To elevate the daily life, we do not make everyday into a banal, or “pedestrian”; but we make it interesting. When schooling is part of everyday life, we make the spaces not to follow monumental scales or form that impose awe, but we make ‘imperfect’ spaces interesting in its materials and the way of construction making students of impressionable age to react . They may understand the value of design as something more than just banal repetition. They would even be reactive to their environment as process of materials reacting with elements. It is like particles becoming solids differently and assembled differently. How the wind moves through holes and how different plants grow differently in different environments; creepers, shrubs, flowering plants, etc.

Bijapur is known for the 15C Gol Gumbaz and monumental feat of engineering and humongous object of perfect symmetry intimidating and exacting, denoting the limits of glory of power. When we were to build a school in this city with many other remnants of past glory around, it was appropriate to celebrate the ordinary and create a diversion from the trends of universalising architecture and building culture and practices.

This educational campus is being developed outside Bijapur on Ittingihal road around 8 kms from the centre of the city. The city is catching up in this predominantly grape growing area sitting in hard rock bed of Deccan trap. The Tungal Memorial Trust that is developing this Campus is looking for an exclusive school to nurture scientific talent. A high school from 6th to 10th leading to SSLC and a Science stream of 11 and 12 PUC, would be a predominantly residential campus that is being planned.

However, they were not looking for a costly system and high end iconic building but a comfortable well ventilated building which does not need much energy to maintain. The promoter was an engineer with building experience and had been associated with design and execution of two smaller dykes across major rivers by people themselves financing at a cost considerably lower than what government projects estimated and was not being sanctioned for a long time. He proposed to build this campus himself employing mostly local labour.

The design of the building took the methodology and techniques that can be built easily at the same time not to compromise on quality of utility or costing. So the idea of design keeping the technology and the method of execution and the process weighed high in the design of this campus. It evolved and everything was not worked out before work started, though a general master plan was made and the construction proceeded piece meal and the requirements too evolved. The procurement and availability of materials and labour skills also mattered. It also required on the site training and innovation.

The method was thus traditional though the techniques were not. There was no contractor, no fixed specs and nothing was rigid. The architecture attempted was interactive. To that extend there was no ceremonious spaces no iconic orms for the sake of it. Reducing the heat inside and to make habitable spaces comfortable in the scorching summer of over 45 degree Celsius  with heavy wind at sometimes in an year, a passive solar architecture minimising mechanical ventilation was attempted. An architecture of every day not dominating one was the intention. The choice was to be an appropriate scale and technology.

The first phase was to build for the 10 plus 2 part of PUC for science streams.

Limited water availability and poor low depth top soil forced us to make the first design choice of reducing the landscape area to absolute minimum so that can be maintained. Classes were organised around a largish court which can house some trees that will provide great shades for students to sit around and even interact. Also it was decided early that part of the ground floor be buried about 1.5 meters and the stone excavated and be used in construction. Most windows of class rooms were to be open without shutters to outside and with a peripheral space with meandering screen wall could create a limited landscape space that is attached to ground floor class rooms. Upper floors where labs were housed could have bamboo curtains fitted on a steel framework outside the windows.

The structure basically is framed with major walls of locally available concrete blocks and plastered. The screen wall which goes around at varying distance of around 2.5 m to 5 .0 m is made up of composite materials. Exposed hollow clay blocks make up a frame of RCC cast in inside to support composite screens of bricks and Shahbad grey stones. The stone plates were cut to shapes and left to the imagination of masons to arrange as they deem fit with in the frame of composite RCC and hollow blocks.The open to sky space between the classrooms and the screen wall was covered by a pergola of poles that were used for scaffolding during construction.

The final roof posed a problem as the summer is too hot. To counter the heat transfer we used hollow clay blocks over ribs of steel and a screed of 5 CMs to form a vaults over class rooms without any form work. This reduced heat absorption and transfer substantially. Also built in the first phase is a part of dining spaces and the kitchen. The design was made up of a cluster of small and big partially prefab domes using steel ribs and hollow cay blocks with green spaces in between. The domes were constructed without any centering. The scaled down downs punctured dome and openness at the side made the ‘mother dome’ of Bijapur lose its monumentality to celebrate the ‘every day’ by the kids. 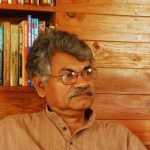