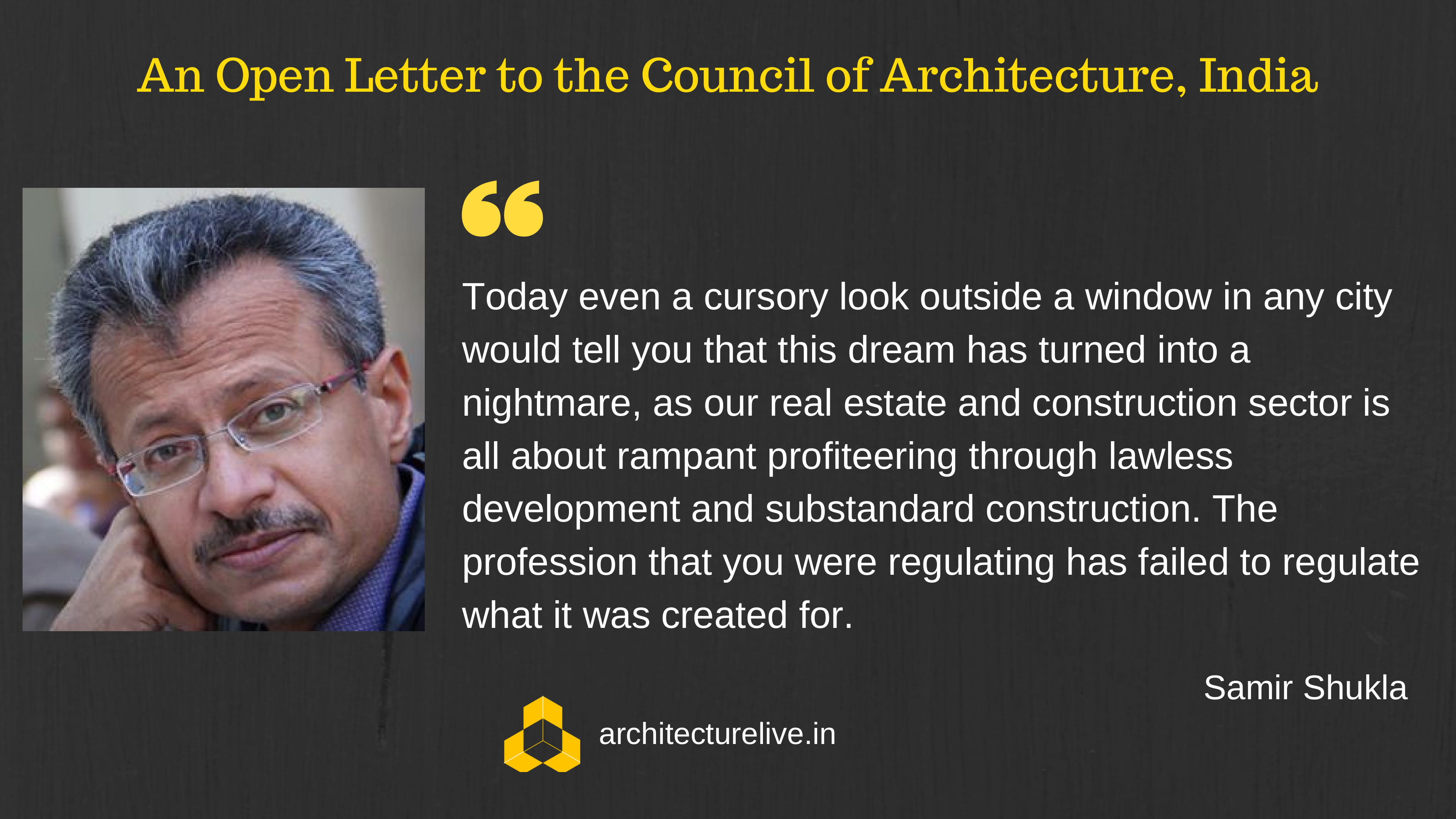 Open letter to Council of Architecture, as Delhi HC adds a nail to the coffin of profession of architecture. – Samir Shukla

As I have not yet seen customary “court-has-endorsed-our-stand” victory messages that architects share for inexplicable reason whenever a judicial body somewhere in the nation adds one more nail to the coffin of architecture, I feel that my communication may be immature; but I want to be the first one to congratulate you for snatching yet another glorious defeat right out of the mouth of victory in the high court of New Delhi on 25th April, 2018.

I must congratulate you for regulating one of the only four professions since 1972, when The Architects Act brought you to existence, in such a unique manner that now you have miraculously managed to lose almost everything, including sole right to practice “architecture” that architects believed they had.

As I read the order issued by learned judge, I am happy to note that it is a fine piece of justice. It is work of a diligent mind that cuts deep into the subject, looks right through all your moral pretence and has concluded that the whole world, other than architects know, i.e. Architect is a mere title, with no exclusive right to practice architecture.

As you have now been at the receiving end of this treatment in couple of courts, you must be wondering about the purpose of your existence, and also of Architects Act, 1972. But, for me, a citizen of this nation that is building one of the worst human habitats in the world, I am not worried about your existential crisis, I am more worried about myself, and hence this open letter.

When the parliament of India decided to enact Architects Act, it implied that the legislative brains of that era saw architect as a professional, an extension of the state, a quasi-legal authority that will guard public interest while designing human habitats.

They knew that such an enormous task can only be bestowed upon an empowered individual who is not serving anyone other than his/her moral responsibility towards greater good. So, they enacted Architects Act to ensure that a profession is formed around a regulator that will have a moral authority and a code of conduct guiding it instead of a business that will readily succumb to the forces of commerce.

You, my dear Council of Architecture, were borne of an aspiration of legislators of a nation looking to have a moral guardian for the massive domain of construction and real estate. You were created so that India sees development that is aligned with greater good and not get reduced to making builders and contractors obscenely rich.

Today even a cursory look outside a window in any city would tell you that this dream has turned into a nightmare, as our real estate and construction sector is all about rampant profiteering through lawless development and substandard construction. The profession that you were regulating has failed to regulate what it was created for.

While you may have various explanations for demise of empowerment of architects in India leading to what is now a national crisis, I have a humble request to you as a citizen.

Architecture needs to be saved, and you need to approach Supreme Court, but before you do that, please understand why orders after orders are issued contrary to your beliefs.

Why isn’t anyone, including courts believing something that you feel is obvious, i.e. doing architecture is exclusive right of an architect?

For that, I request you to open your own “condition of engagement and scale of charges”. From “preamble” to the “scope of work” and beyond, you are constantly claiming that architects are expert engineers with the ability to do work of structural, electrical, mechanical and many more engineers, hence all these jobs are part of “architecture”.

Do you think that anyone, and for that matter a court is going to believe your claim of architects usurping right to do engineering from engineers? If you are still sure of your claim, call ten members from your register and ask them to calculate beam deflection or make an SLD diagram.

The truth is, you are going to get defeated in every court of law because your hands are not clean. The loss in Delhi High Court also rests on the simple issue of defining what “architecture” is.

So, for the sake of the nation and for honourable profession of architecture, rise to the occasion. Admit the simple fact that architects can’t do engineering.

You need to define architecture and designing for human-use, and engineers must define their job as designing to integrate technologies in a building. As humans are more important than technologies, architects may claim to be first amongst the equals in a team designing a building, but if you think that you can use Architects Act to ensure that architects can usurp engineers’ job, you are mistaken.

You must reach out to the Supreme Court with clean hands. Your loss in Delhi or Allahabad High Court is based more on technicalities because Architects Act has failed to incorporate definition of architecture and limit it to architects, but there is a higher purpose of your existence that Supreme Court can appreciate.

Nation needs architects as professionals. We need empowered professionals who are serving the society. If juristic entities or unregulated individuals replace a professional, they can’t uphold the greater good. So, just because Architects Act is drafted with defects that fail to limit, it doesn’t mean that nation has to live without a much needed professional.

This is possible only if you, the mighty Council of Architecture of India wakes up to the realities on the ground and cleans up your own house. As we are poised to explode as a nation in terms of infrastructure and real estate building, you need to act, and act now. Sort out your differences with engineers, define your scope honestly and reach out to Supreme Court to seek remedy.

A hopeful citizen who wants good clean cities and well-made buildings by architects and engineers, two brothers in arms.

The article was first published HERE.