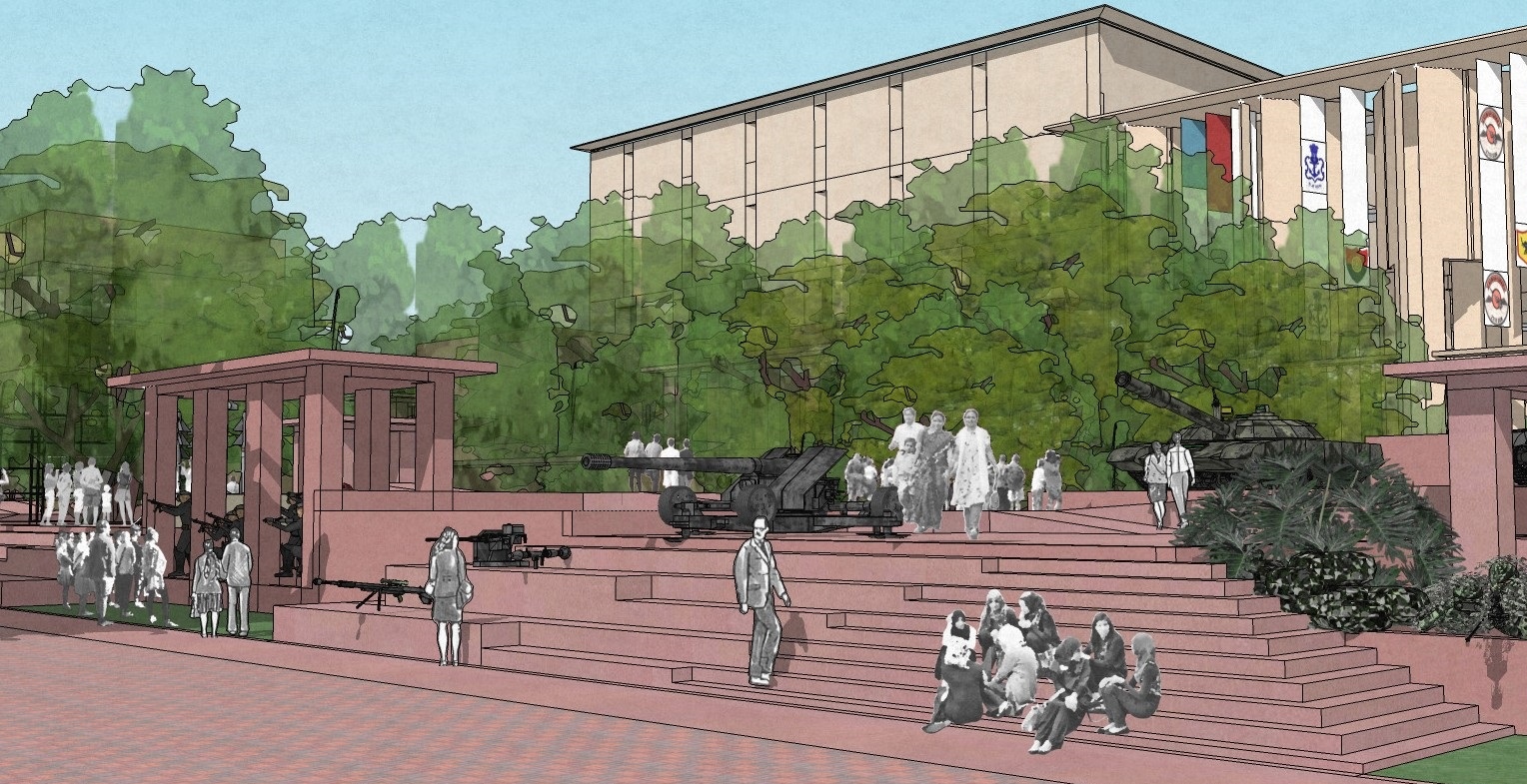 Three major roads – Tilak Marg to the East, Copernicus Marg to the West and one segment of Central Hexagon towards the South-West bounding the site – offer potential for rational control of additional vehicular and pedestrian traffic without burdening any one of the accesses unduly. The existing road (approximately East-West in orientation) through the site allows for a division of the site through the middle of what is otherwise a large length along the north-south axis. The eastern side of the plot has an irregular boundary, beyond which exist encroachments that are part of the original area demarcated for Princess Park. Since they are yet to be cleared, they are best left earmarked for future expansion. The presence of almost 350 trees on site – mostly fully grown with dense canopy – provide valuable green cover which would have otherwise taken many years to develop had they been planted along with the construction of the museum. By utilizing only the clearings for construction (while adding more trees and soft landscape) there is an opportunity to create a wooded island within which the new development would nestle.

The site conditions guide the design at two levels. A logical and practical organization of vehicular and pedestrian movement routes – incorporating the existing road dividing the site – has been proposed. This allows for an introverted formal entry, thereby reducing conflict points and slow-down of traffic on the surrounding major roads. It also creates a neat separation of the gallery areas and related spaces of the museum from the institutional, administrative and temporary exhibition spaces. The footprint and character of the building are determined by the circulation and the buildable space that emerges out of removing the existing barracks and retaining the trees.

The spatial experience of the building is juxtaposed with the viewing experience of the museum. The resultant built form allows for controlled, ticketed museum areas to interact with an outdoor museum / display space that is completely public in nature – this is achieved by interweaving open spaces and built blocks and using various architectural elements to create semi-covered spaces of varying scale and terraces (which form the gradually rising plinth of the building). The indoor and outdoor spaces, thereby, become ‘experiential’ and hold as much interest and excitement as the exhibits on display.

The proposed edifice, while maintaining an impressive scale, projects an elegant dignity consistent with the character of development around the Central Vista. The primary facades on the C-Hexagon and Copernicus Marg step back through distinct levels while the tallest blocks get located inwards and towards the northern end, reflecting the concentration of mid-rise buildings beyond. The use of screen walls maintains the desired scale and presence of the facade along the major roads, and also allows for the incorporation of recessed walkways/colonnades along the various outdoor display areas and enhance the interplay of the open and the covered spaces. The use of screen walls and shading devices helps control direct lighting and reduces incident heat gain.

A spacious entrance plaza (8), spanning across the dividing road, is the public entrance to both wings of the complex and also an important anchor to the pedestrian promenade that links the outdoor display spaces. Two more plazas (1) & (4), meant only for pedestrians (one being the exit from the connecting tunnel from the proposed National War Memorial), mark the two entry points to the complex Pedestrians from all the surrounding roads, including users of buses, three- wheelers, cabs and the Metro (located a short walk away) enter the pedestrian promenade from the plazas mentioned above. 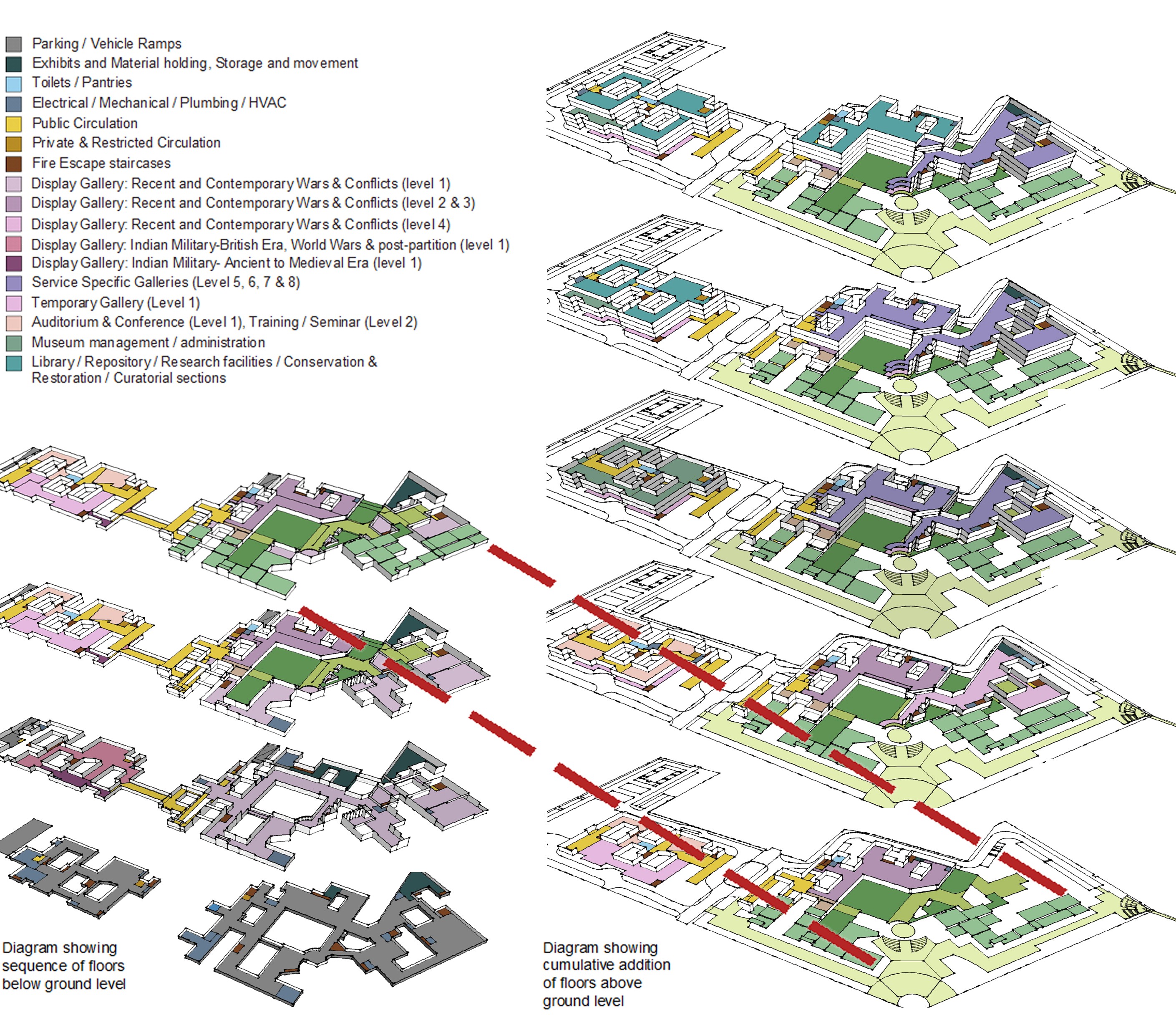 Besides an open-air display and the bandstand (performances of military bands are envisaged as a very popular attraction for the public), the outdoor display areas support functions such as a cafeteria, bistros, kiosks and other similar revenue-generating and activities. Large objects – either fixed or stable by themselves – such as aircrafts, canons, armoured vehicles, captured trophies etc. (or their scaled reproductions) will be placed on the terraced plinth.

Scaled reproductions of ‘action spots’ providing details of strategy, thrust, action and results of decisive battles will be created in the open courts. These courts could also be utilised to demonstrate elements of camouflage with day and night time variations. Interactive consoles and educational modules, including those based on smartphone apps will support the entire viewing experience of the museum. Augmented reality programs will be used to enhance the realism and immersive nature of the museum viewing experience, especially in the case of the ‘actions spots’. Scaled Maps, depicting the terrain, the movements and the battle locations of important theatres of war, can be marked on parts of terraces and courts of the complex, using permanent materials.

You can read more about the project here and here. 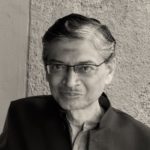