The Location being home to a number of restaurants, cafes and high-end shops turned out to be a prime location for their office. The ideology to be adopted by Studio Bipolar was to design a space with the intention of catering to the functional needs of the office, have a sophisticated ambience; yet achieve it in a quirky way. 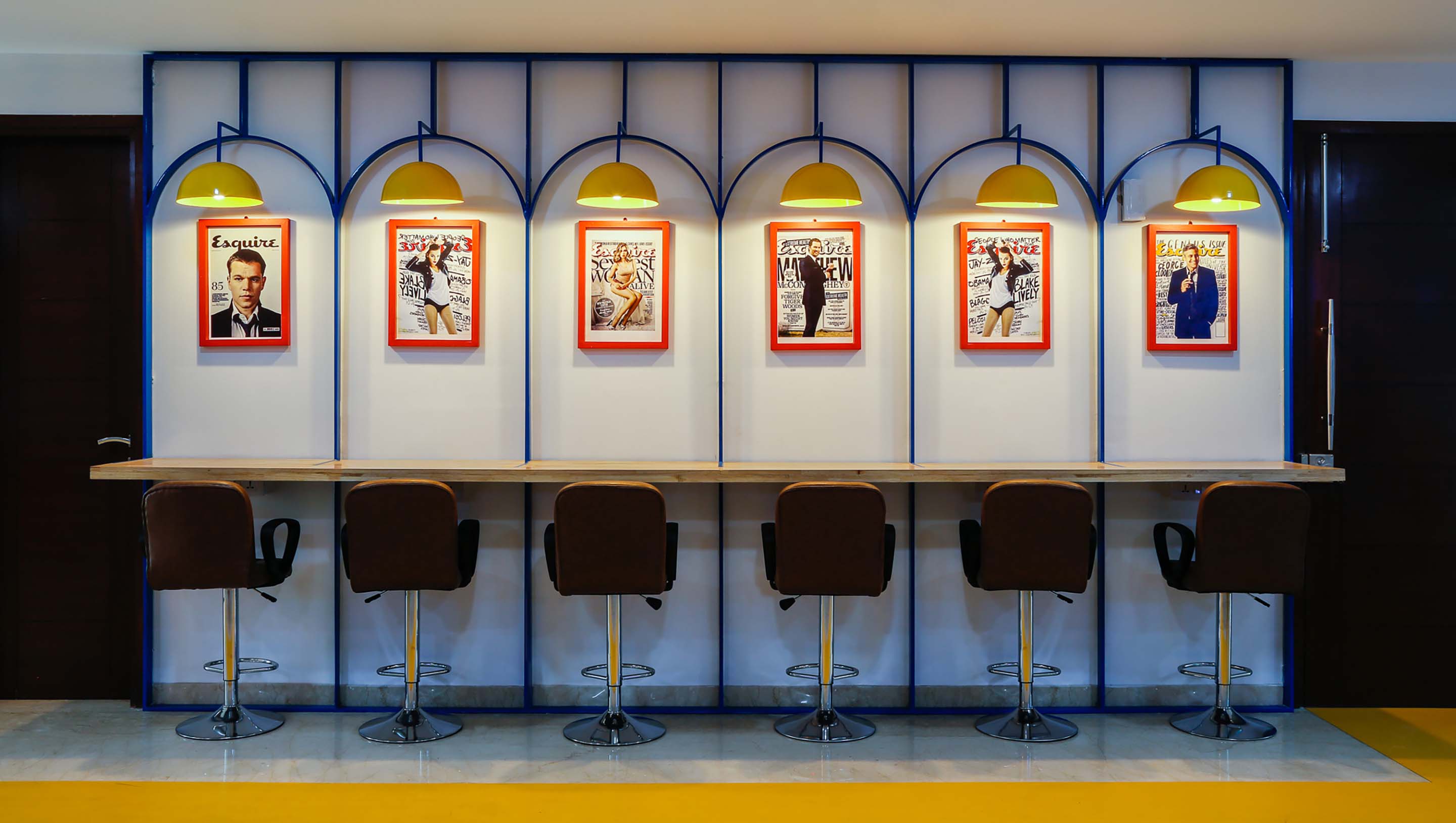 Esquire being an American men’s magazine, published in the United States, is one which screams sophistication, yet it accomplishes this in a quirky and whimsical tone.

This thought was to be carried out in the design of their own branded nightclub in the heart of new delhi. For the sole purpose of supervision over the nightclub and its administration, Esquire needed a workspace to be developed for them in Defence Colony Market, New Delhi. This work hub was being developed for the “creative owners of a nightclub” and the design had to reflect this very aspect as well.

The Location being home to a number of restaurants, cafes and high-end shops turned out to be a prime location for their office. The ideology to be adopted by Studio Bipolar was to design a space with the intention of catering to the functional needs of the office, have a sophisticated ambience; yet achieve it in a quirky way.

The concept to be followed was of ‘Sophisticated madness. We embraced the idea of primary colors being used in the interiors so as to enact dynamism in the mind-set of the users yet depicting simplicity and minimalism.

Another parameter to be kept in mind was the fact that Esquire emerged in the Art Deco Era when traditionalism gradually converted into modernism. Art Deco influenced the design of buildings, furniture, jewellery, fashion, cars, and everyday objects and had arches and asymmetrical shapes as prime elements. The office had to be a reflection of all these parameters in a single connected space.

Moreover, here, a large space had to be divided into individual sections which would have a porous nature for the purpose of connectivity and linkage amongst the holders and at the same time, having a provision of privacy to those sections. This led to an idea of punctured partitions. These partitions were composed of slim metal plates bending to form simple geometric shapes which would house tinted glass pieces.

Another eye catching feature, was the black and white striped wallpaper which was visually impactful and served to elongate the space. Again, this feature lent a kinetic touch to these partitions providing a backdrop to let them stand out. 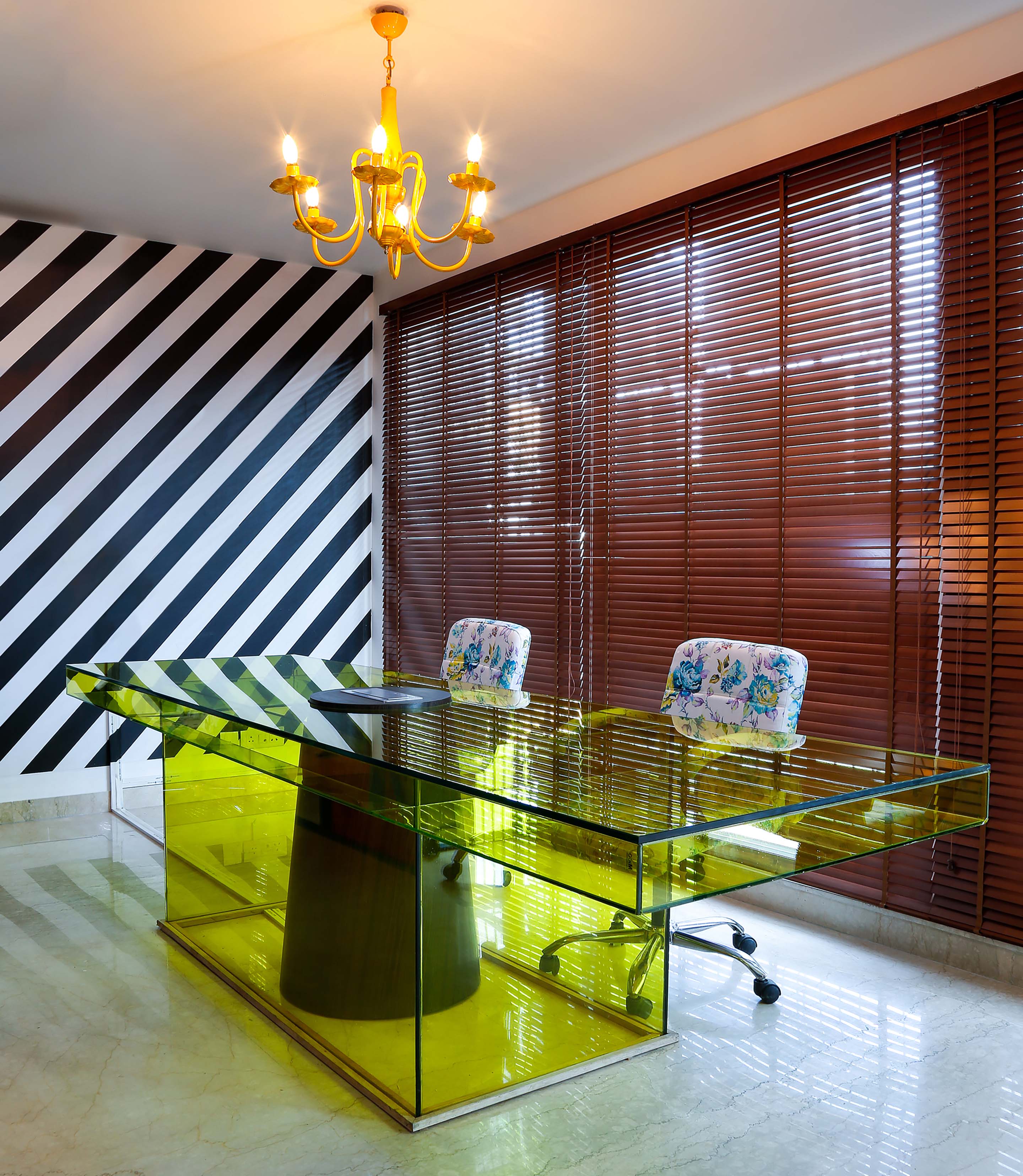 This hub got furnished with some distinctively impactful elements, namely, the yellow carpet, the conference table and the working counter. The concept of the yellow carpet was to direct the circulation as well as provide a ‘red carpet’ of sorts for clients once they made their way to the boardroom.

Furthermore, the boardroom was to have a conference table that echoed the space around it, Thus the ultimate outcome was a yellow tinted glass table ,made completely frameless which reflected the patterns formed around and lent a warm hue on the floor and walls.

Following this, Studio Bipolar came up with a functional aspect of the working space which was a high table resembling the look of a bar counter. The supporting wall is highlighted by framing iconic Esquire covers reinforcing the brand image throughout the space along with the Art Deco inspiration. 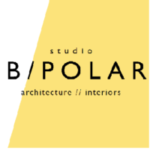