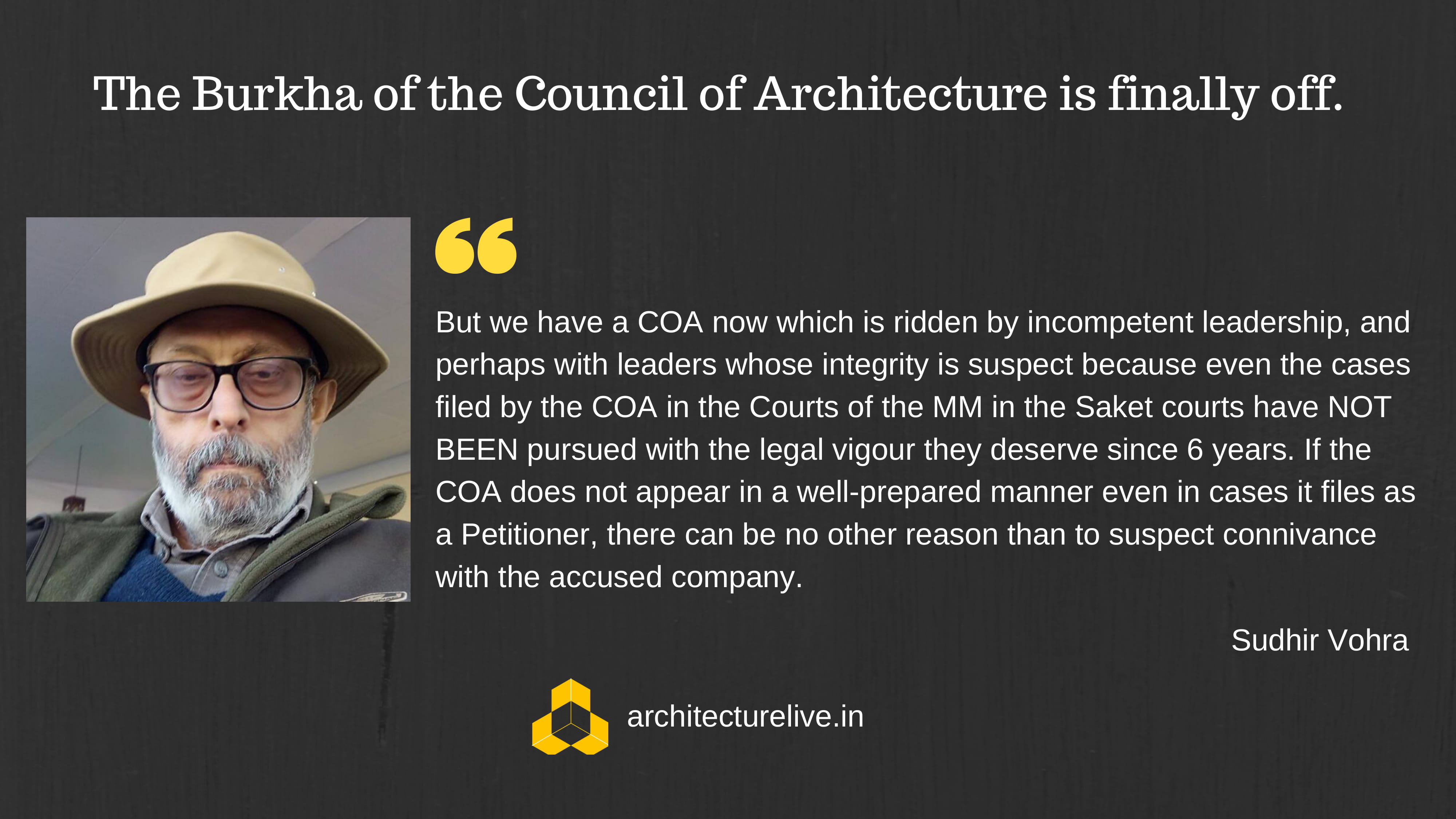 The Judgment of the Delhi High Court in CWP 934 of 2012 (Sudhir Vohra Ver the Ministry of Corporate Affairs ) is the result of the classic neglect of the Council of Architecture ( COA)'s towards PROFESSIONAL matters.

The Judgment of the Delhi High Court in CWP 934 of 2012 (Sudhir Vohra Ver the Ministry of Corporate Affairs ) is the result of the classic neglect of the Council of Architecture ( COA)’s towards PROFESSIONAL matters.

Logically speaking, all matters of professional interest to Architects should have been taken up by either the Indian Institute of Architects (IIA) or the COA. But for decades, the two organizations (the IIA being a Society, and the COA is the statutory regulator for the profession) have busied themselves in dinners, cocktails, material manufacturers’ marketing events, and of course, the lucrative business of both opening architecture colleges and then inspecting them. Quite similar to the MCI and other professional regulators’ track record.

I decided to raise the issue of how foreign entities were penetrating the Indian Architectural profession by exploiting the Companies route (opening a Company in India with a small 1 % share with a local Indian person ) in October 2010. The COA did nothing to pursue the matter with the Ministry of Corporate Affairs (MCA), except a meeting in 2011. However, the MCA agreed with my representation and issued the Circulars in 2012 which stopped the creation of new companies which intended to practice architecture through the companies routes.

What remained was what had to be done to wind up the existing 18 odd companies which were already in illegal existence. That was what the Writ Petition No: 934 of 2012 was all about.

It took 6 years for the case to mature into the argument stage. Such is the Indian judicial system. In these 6 years, the Consulting Engineers Association of India (CEAI) and some others intervened in the case. I did not object to that, as it made sense to hear them.

But the crowning glory is that even when the foreign companies and the CEAI hired top and senior lawyers to argue, the COA ‘s lawyer was conspicuous because of the low quality of legal arguments and decrepit court craft displayed by the COA counsel in court. He was completely inadequate in his arguments – thus this judgment.

Of course, this judgment will be appealed in a higher court . Logically the appeals should be filed by the COA, IIA, and other concerned groups.

But we have a COA now which is ridden by incompetent leadership ,and perhaps with leaders whose integrity is suspect because even the cases filed by the COA in the Courts of the MM in the Saket courts have NOT BEEN persued with the legal vigour they deserve since 6 years . If the COA does not appear in a well prepared manner even in cases it files as a Petitioner , there can be no other reason than to suspect connivance with the accused company.

In a nutshell,”the Burkha is off”, and the true nature of the COA’s unwillingness to protect the very Act of which it is the creation is now revealed.

This is not an unusual situation in the Indian Context. the MCI has covered itself with corruption (albeit more visibly), and now the COA is going down the same path. It remains to be seen how the COA reacts to this critical judgment – only the future two weeks shall tell, as the court system allows the COA only till the 24th of May to react in the form of an appeal. The day of reckoning has come – “hashar ka din to aayega“- Ghalib.

If this judgment prevails, it shall make sense for architects to return their registration certificates, and to continue practice WITHOUT the burden of a regulatory system – why hang on to a regulation which only holds you responsible? and does not give you any privileges of practice? 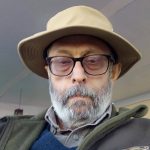 Sudhir Vohra graduated from the School of Planning and Architecture, New Delhi, in 1979 and practising in New Delhi since 1979.