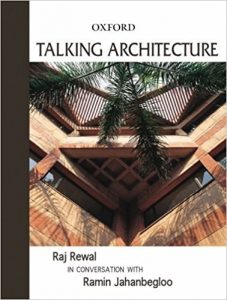 Find the book on Amazon here

As Mies van der Rohe said – ‘Architecture is the will of an epoch translated into space.’

The appearance of this quote by a minimalist in the preface of a book about Raj Rewal is no fluke – Ramin Jahanbegloo brilliantly sets the tone of the following text with these ten words, providing a backdrop against which the body of Rewal’s architectural philosophy unfolds, explaining in great detail how he sees the world as well as how he contributes to it, an inevitably dynamic process of give and take of ideologies and values.

Carefully crafted and insightful (and serving – interestingly enough – as much as a context for Rewal’s work as a summation of it) Jahanbegloo’s foreword is an excellent start to Talking Architecture, the fourth of six books by the Iranian philosopher transcribing conversations with Indian pioneers of varying social sciences. Based off a series of interviews with the architect, the book is essentially a conversation between the Jahanbegloo and Rewal, musing upon not just the latter’s work, but on the state of architecture all over the world.

Rewal’s architecture, indubitably, is the voice of an epoch. The product of a young, socialist India rediscovering itself in the wake of its new-found independence, Rewal’s work embodied the spirit of the time by creating an identity of its own – culling through rich local traditions and manifesting them via the technological advancements made accessible to the nation through its erstwhile masters. India’s modernism, hence, takes notes from its western predecessors but develops into something much more extroverted and nuanced – looking beyond banalities often misinterpreted as minimalism, and an undue stress on function at the cost of everything else. It is, Jahanbegloo points out, as much of a conversation about ‘East meets East, as it is about East meets West.’

The book has been divided into four chapters, and several sub-chapters within each – the primary purpose of which appears to be not as much of lending structure to the prose as of highlighting the underlying theme of each turn in the conversation. This conversation begins in a typical interview format, with Jahanbegloo encouraging Rewal to paint a picture of his early life and the circumstances that created and affected his debut in the profession; the questions, however, evolve into insightful statements about art and culture, as we progress – hitting a crescendo as Rewal and Jahanbegloo start to discuss Rasa in Architecture, the ideas of a philosopher and academician contending against those of a secular and pragmatist architect. The result is a discourse that becomes the crown jewel of the book – a thoughtful note on how the spirit of creation unifies the material and the metaphysical alike.

More than anything, perhaps, Talking Architecture is an excellent manual on how to develop one’s own design language, asking the right questions and raising the right issues and compelling the reader to think of their unique role in the professional community. With Rewal’s personal approach to design – combining cultural and spiritual elements with perpetually relevant issues of sustainability and suitability – described beautifully in the book, the conversation offers a perfect template for a young architect to create and cultivate their own set of design values. The dialogue is thought-provoking, and manages – through the means of one conversation – to inspire several others.

An issue perhaps can be taken with how the book often touches upon policy problems in the Indian built environment, but never fully seeks to resolve them. Another point of contention is how all the images are in black and white, contrasting with Rewal’s assertion about the importance of colour in the Indian architectural vocabulary – and how western modernism often falls short in this regard – that is displayed amply in his buildings. In a dialogue that focuses almost entirely on Rewal’s distinctive methodology, it seems counter-intuitive to not display his works in their vibrant – and colourful – entirety. The book also addresses several of Rewal’s projects on a case to case basis and discusses them at length in later chapters, but does so in context of issues that have already been touched upon in previous pages; while the approach works excellently as a teaching tool via case studies, it does appear repetitive when read in one sitting.

But then, their conversation – and the book – ends on a surreally poignant note, with Rewal admitting, “[If I had to live my life again, I would choose to be] an architect again, but perhaps I could have participated more actively in public dialogue. I hope I have managed to communicate through my architecture.”

Talking Architecture, hence, becomes much more than a conversation about architecture; it is a reminder that the buildings we lead our lives in and around carry legacies of their own, just as rich and textured as the lives of those who designed them – that Architecture talks.

Find the book on Amazon here