Best of Asia Village, Interior design for a restaurant at Delhi by Aspire Designs

Asia is an amalgamation of many cultures and when it came to creating a visual rendezvous for a restaurant, the inspirations needed were endless extraordinary and incredible.

Best of Asia Village, a restaurant developed on the lines of Asia’s cultural heritage, variations of food and historical background. The restaurant has fine dining area, covered casual seating, open and semi-covered terrace seating and private dining/ open party area.
The underlying concept behind zoning the areas came from the Chinese mythology concept of Earth, Sky and Heaven above.
The main floor being the Earth (Diqiu). This Earth looks up to the Sky (Tiankong), i.e. the Terrace level with its openness and further climbing up to another height i.e. the Heaven (Tian), the private sojourn. 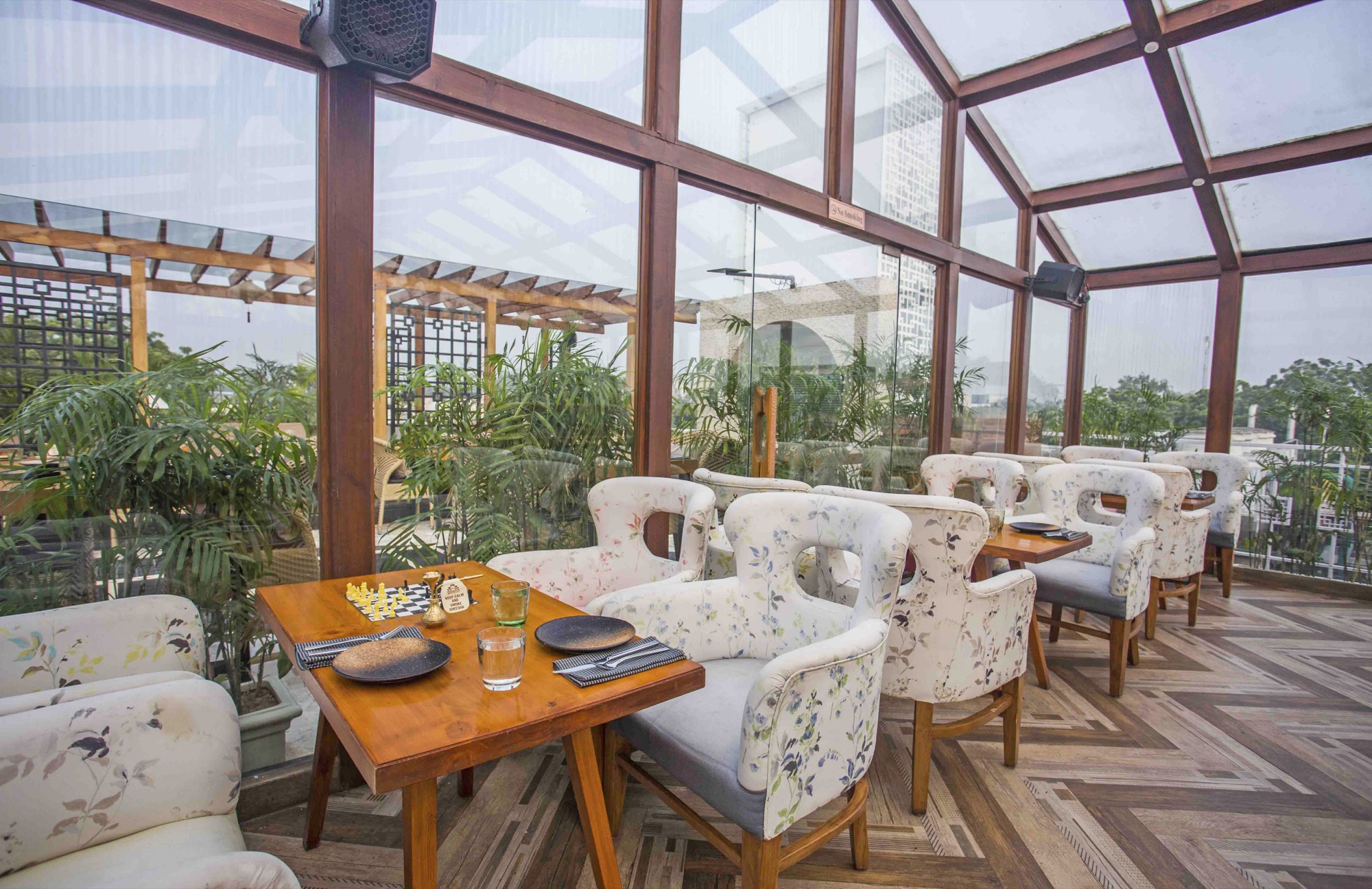 The restaurant spread over three levels is accessed from a lift and a series of steps lined with plants and welcoming flowers. At this stairway itself Japanese ideology of relationship of architecture with outdoors becomes imminent.

A wood bordered gateway leads to the main level, entering into a large double height space. Relating to the Japanese Architecture, this is the Central space also called the “Moya.” A sacred central space that holds and connects all the other areas. The Three levels look into this central space.

At the Moya one is greeted by two large statuets inspired by the sculpture art forms of South East Asia. 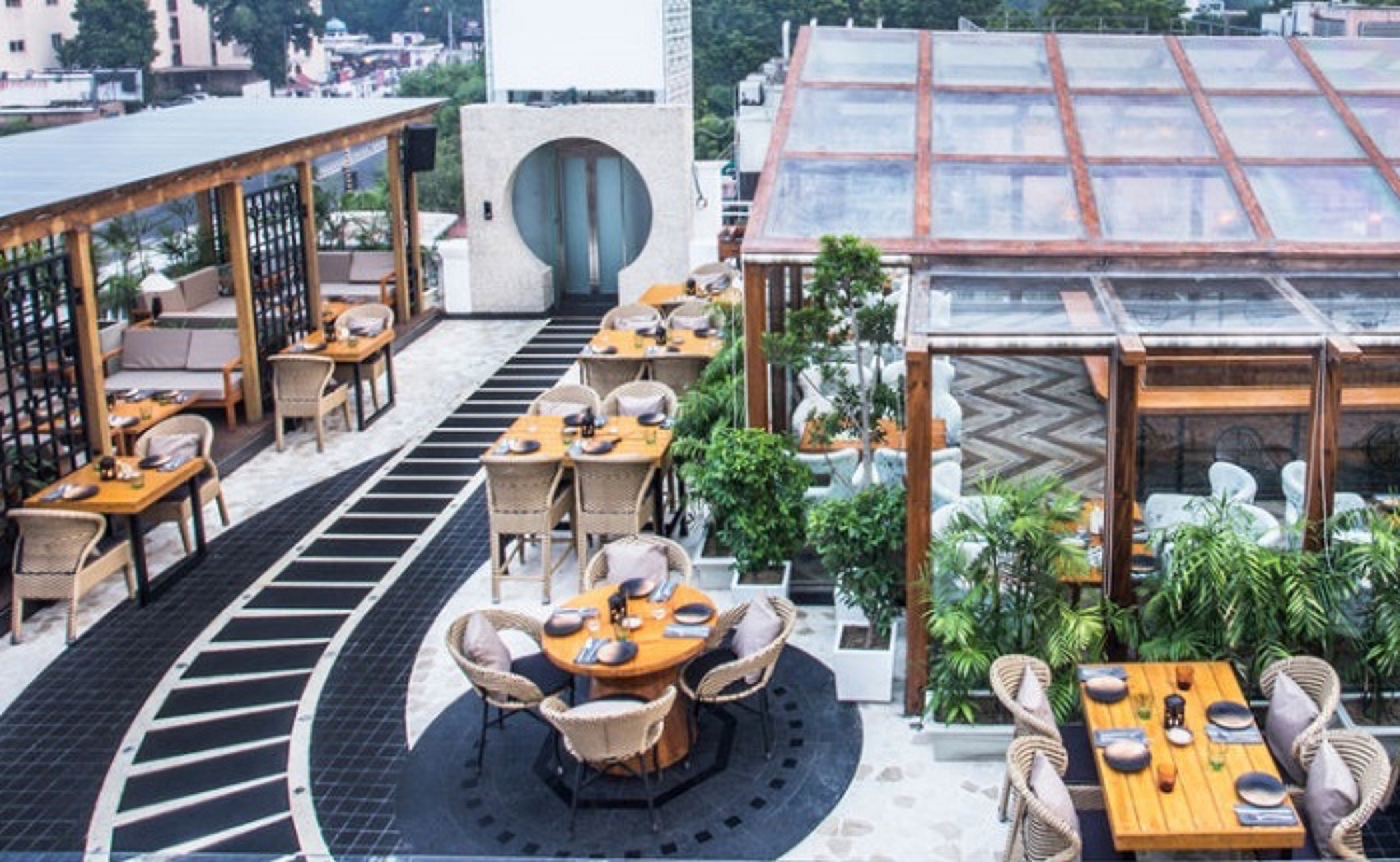 The walls of this space is covered with relief carving stone depicting culture and stories from ancient Angkor Wat.
One side the floor extends as a fine dining seated area where walls are turned into traditional moon windows with Chinese wooden fretwork, rustic wooden lintels and large lit up windows and dragon medallions. Between these moon window panels is the Lift entry which faces a large Buddha face inspired from the carved mountains of Cambodia.

The ceiling here is a series of interlaced old Chinese window panels on the sides and random array of hanging wooden battens in the central aisle, leading the eye to the central space. These are dotted with hanging cylindrical lamps.

The layout and design of the space is simple but made with attention to detail and intricacy, incorporating natural materials like stone, wood and silk.

The presence of Five elements from the Chinese philosophy is achieved through placing Water at the entrances and a water fall in front of the lift; placing candles on tables and back lit Fire Albaster as backdrops on both ends of the hall depicting Fire; abundant Stone flooring and wall cladding for Earth; Metal laminate cladding and tables bases and other fittings bringing in the Metal element; and Wood lintels and tables.

The double height face of the Moya houses a Bar under the statuets and a DJ counter between them at a mezzanine level. All with a backdrop of lit-up Chinese panels. The space looks up towards a glass roof with hanging Origami lit up birds as if flying in the open sky.
Passageways on sides of the bar lead to the washrooms on one side and the Upper level on the other side through a serene staircase where one is mesmerized by the wall carvings of the Chinese fan (Sensu) and tableware. These steps lead to a seating area within a glass structure that unites the interior with the landscape outside. The large glass panels allow light to enter the depths of the main floor and keep the upper seating as if in the outdoors.

Around this is a large terrace with a long impressive bar and grill with extended buffet counter and backdrop with dragon motifs. The lit up jali work counter and hanging lanterns are covered with pergola.

Lined above this are the Seven Mudras depicting the various concepts of Wheel of Life in Buddhism through large hand sculptures on the wall above, visible from the whole terrace. Another side of the terrace is a series of semi-covered Gazebos enclosed with luscious palms. A stone gateway frames the lift entry on one side.

Natural materials and rustic finishes are used extensively and combined with intricate patterns to maintain simplicity and connect with nature.

A large feature wall is another highlight, with stone relief work of the Great Wall of China and the grand mountains rising above. This wall is further accentuated with wall hung lamps depicting the traditional custom of floating lanterns, decreasing in size as they rise and also marking the way from the main Sky Terrace to the “Heaven” above. A curved open staircase along this wall leads to the Upper terrace.
The Upper terrace in contrast to the main terrace is introvert, open above but surrounded by a luxurious thick belt of plants, and a series of columns with traditional buttresses and hanging lights. This space can be used as private dining and party area, the space holds a private bar and direct access to washrooms.

Asian design is based strongly on craftsmanship, beauty, elaboration and delicacy. The Restaurant aspires to reinterpret these traditional values with modern sensibilities. 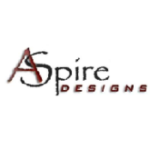 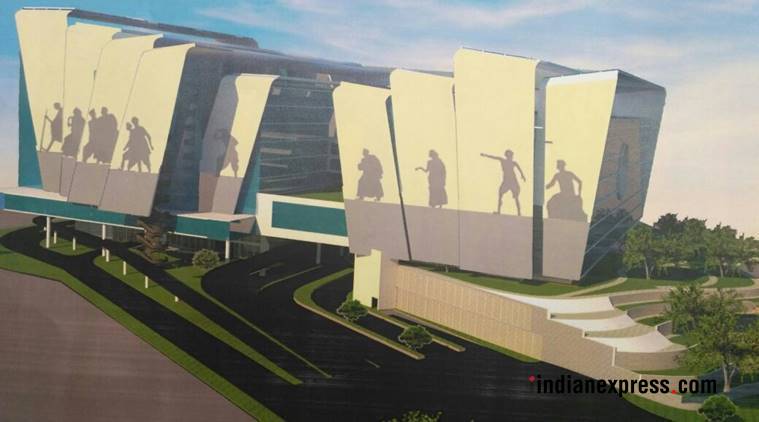 The design of India’s first bullet train terminal is ready. The Sabarmati station in Gujarat, which will be the terminating station of the Mumbai-Ahmedabad bullet 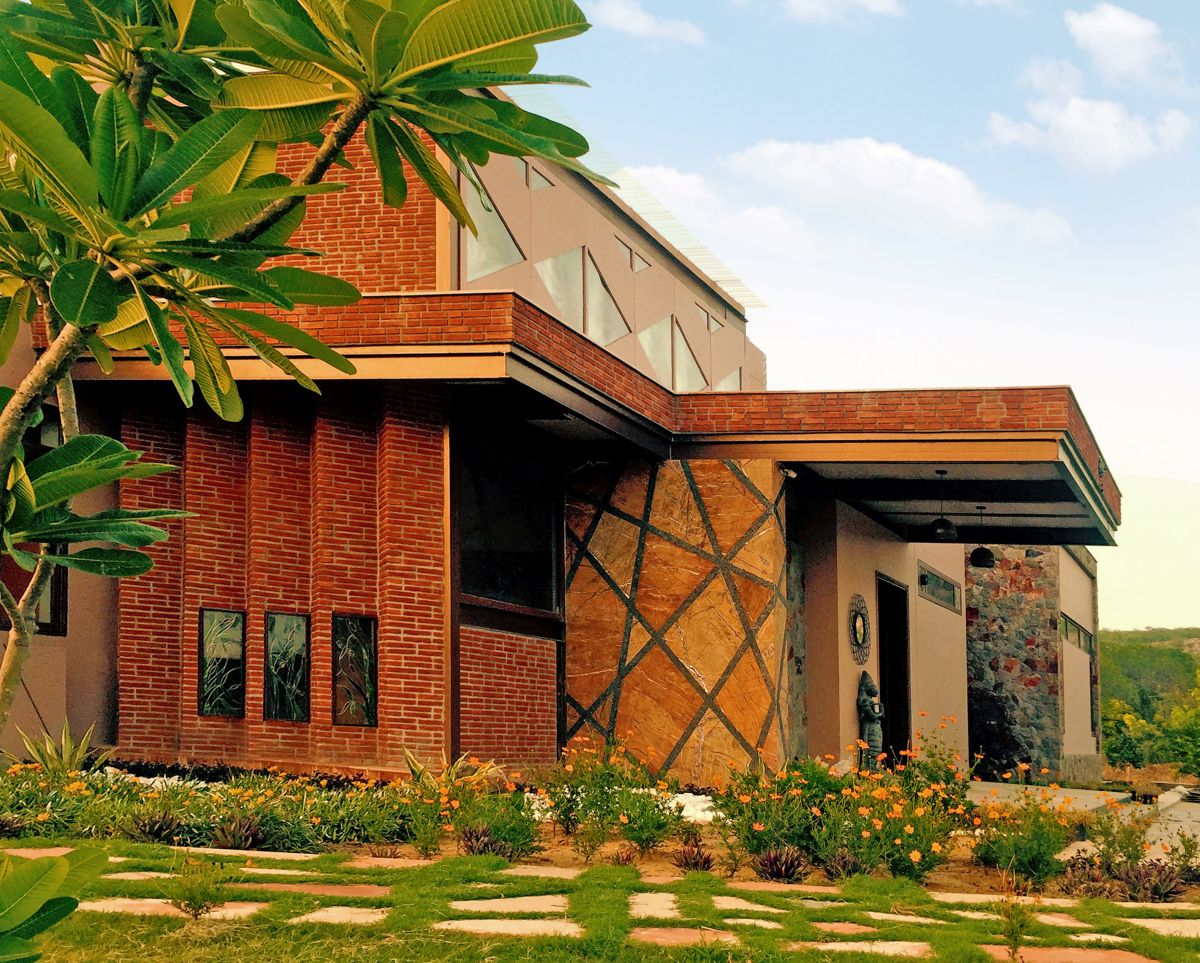 The Flux Farm (F2) is a hideaway, embraced by the Aravali Range with its greenery punctuated by quarried Rock, Kota village and the ITC golf course. 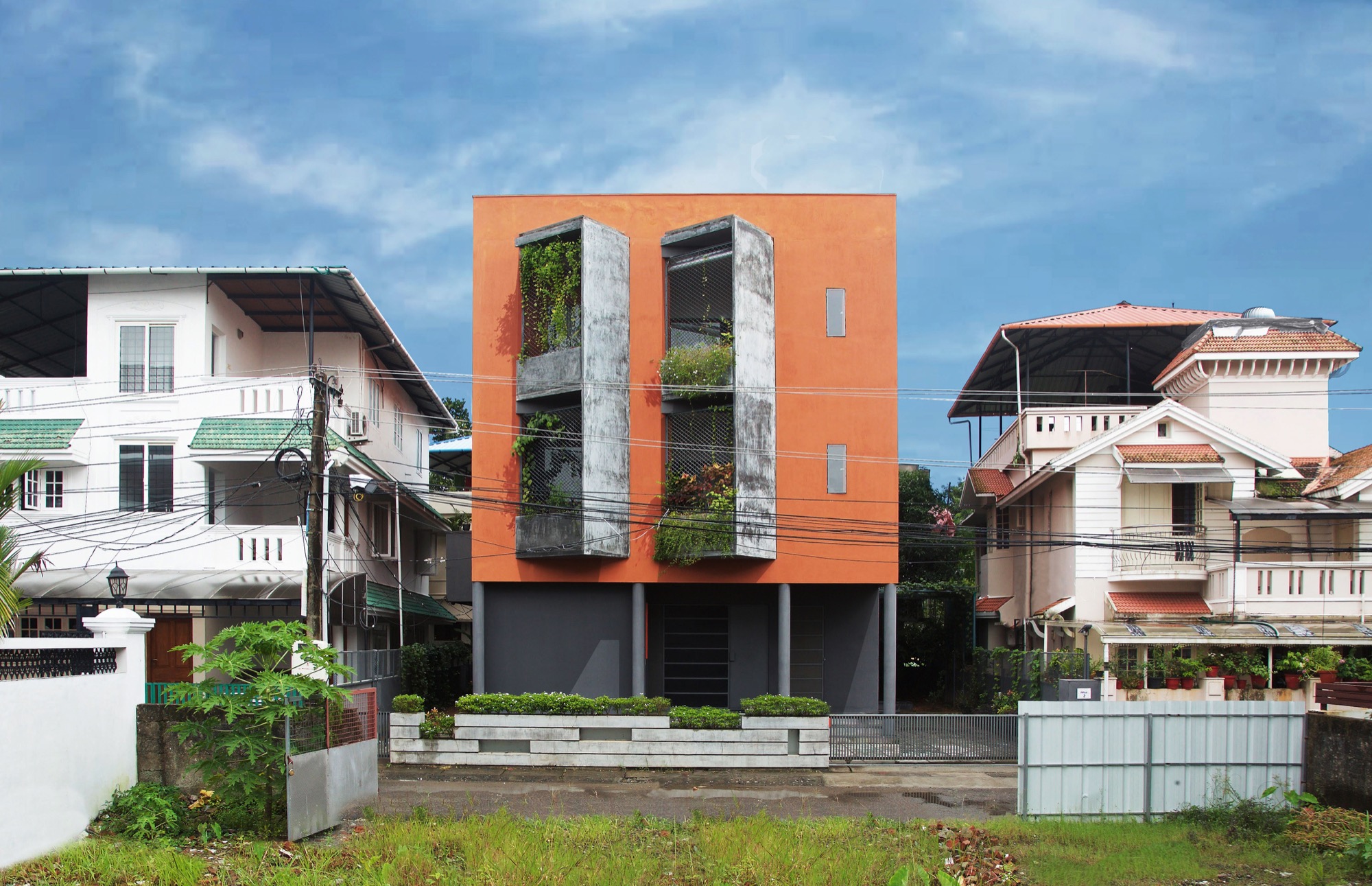