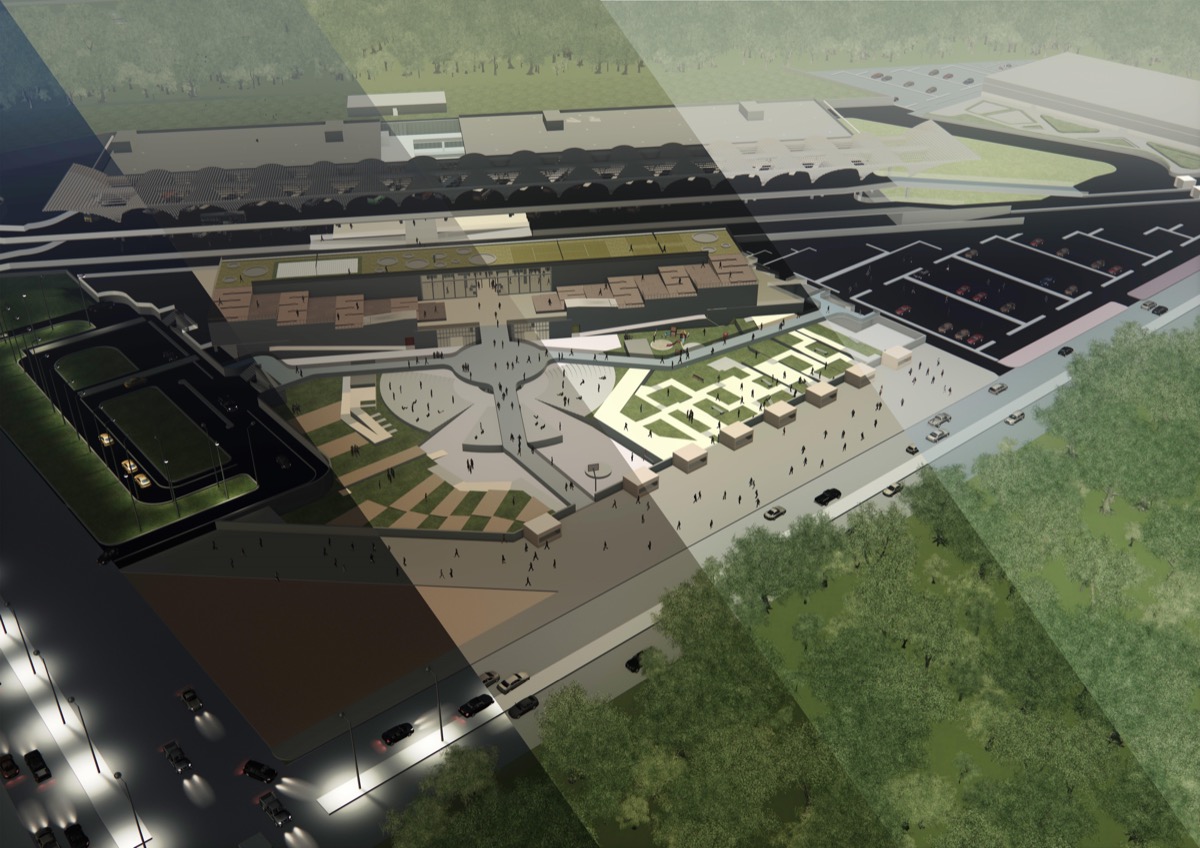 A transit hub is the spine of any city. It serves the most basic necessity for the city that is transportation. But when we hear about ‘Transit Hub’, the first thing that comes to our mind is either train or bus or metro or all combined. The fashion of creating huge transit hubs without any concern for the immediate society around it has a deteriorating effect on itself. Because of this, people have to adjust to the design rather than creating an adaptive design.

A transit hub is the spine of any city. It serves the most basic necessity for the city that is transportation. But when we hear about ‘Transit Hub’, the first thing that comes to our mind is either train or bus or metro or all combined. The fashion of creating huge transit hubs without any concern for the immediate society around it has a deteriorating effect on itself. Because of this, people have to adjust to the design rather than creating an adaptive design.

A transit hub does not necessarily needs to be just a starting or ending point of a journey. It can also serve as a node for the community that surrounds or resides around the hub. But how does this happen? How to get the community involved in the process? The answers lies in the needs and aspirations of the society. If their wants and demands can be met on an optimum level at a place which provides them an escape from their daily schedule & also gives them a new set of viewpoint for the environment surrounding them, then the space will act as a node for the society & passengers. This is what has been tried to achieve.

The bus terminal proposed is in sector 21 Dwarka, Delhi and is supposed to be an international bus terminal. The project focuses on improving the current scenario of transit hubs by implementation of controls through design.

Also upgrading the transit hub as a community space so that it relates and responds for and to the society surrounding it. Through research and case studies several issues were realized in the existing typology of terminals. Hence by trying to resolve them, what has been achieved is:

Faded have those days, when children use to get scolded for playing cricket in the streets. Breaking windows, hitting cars and then running away to save themselves from scolding. Today’s youth does not need to be in juveniles or any other form of restricted or confined boundaries to feel that way. The technological pests such as mobiles, gaming consoles and internet sources have already made their way into their daily lives in order to keep them glued to it.

But is it only the youth to blame? Have the adults not lost their way? 9 to 9 office hours. Office and household duties have chained them to reclining plastic seats. Whether it is the middle aged ones or the old age. The social connection has almost smoked into thin air. How to revive that connection again? Earlier their use to be a house for every family. Now it is a society of numerous houses for numerous families within confined limits. This itself has limited us in engaging with different people at the same time. What can be done? To give back what has been taken from the society, a space is needed, which provides them with the most basic activities and needs. This will help in fulfilling the purpose of going to that place and hence, the place will not be defunct.
After research and study of the context it was concluded that a gathering and common playing and engagement point was needed.

On the other hand, the city is suffering from ever increasing demand of public transport. And the current bus terminals that run in the city are not functioning properly and to their full potential. One of the main reasons for this is poor infrastructure.

This terminal is part of a ‘Multi Modal Transit Hub’ and hence will face high amount of traffic both in terms of vehicles and passengers. So how can a transit hub be the face of the city? How can architecture be the catalyst of change for future?

This terminal becomes the interconnection of change and progress. This is how terminals should grow. This is how it will begin. This is why it not just a terminal but a ‘Nodal Integration of Urban Transit Hub & Community Spaces’.

Even though the intention of the design was to be community oriented but the primary motive was to create a highly efficient bus terminal of international standards. Hence the design is not overpowered by the community space and is yet its integral part.

The site is approachable for the passengers from multiples entries but for vehicles and buses from singular entries. This makes it easy to maintain the traffic and also increases the legibility and viable.

The building have been oriented in the direction of the major axis of the site to ease the movement of buses.
Movement of buses have been distributed on different levels for the ease of passengers.

Totally different and detached pedestrian block has been created for ticketing and information and tourist information area so that only the people with tickets could go into the terminal building. This creates a less chaotic environment.

The community space has been placed in front of the site because that is the only area from where the site is totally visible and also it is near to the residential area around the site.

The office building is totally alienated from the terminal side to create a disturbance free and easily approachable space.

The three buildings have their own characters yet are in right harmony with each other.