In today’s time with the emergence of the internet and digitalization of the books and information, this has enormously influenced the manner in which we consume information. With the developments of new methods and types of media, the traditional role of a public library is to question. The significance of the physical collection within a certain environment versus a quick internet search at any given point of time within any environment, questions the sustainability of a public library and the resources it offers. - Ishita Parmar

ABSTRACT :
In today’s time with the emergence of the internet and digitalization of the books and information, this has enormously influenced the manner in which we consume information. With the developments of new methods and types of media, the traditional role of a public library is to question. The significance of the physical collection within a certain environment versus a quick internet search at any given point of time within any environment, questions the sustainability of a public library and the resources it offers.

Library needs to be transformed as an active social space. A public library is just not a space to access physical and digital data but also create an environment to initiate interaction of people and exchange of ideas takes place amoung all people of diverse backgrounds and age groups visiting the library.

Public library; the most democratic and one of the few spaces under the public realm of the city have tremendous potentials to transform into value-addition as community information, knowledge, resource and service centers.

What is a Library?

The public library, the local gateway to knowledge , provides a basic condition for a lifelong learning, independent decision making and cultural development of the individual and social groups.
– UNESCO Manifesto, 1994

Changing concepts of a Public library

Traditional libraries have quickly redefined themselves as hybrid libraries which are a combination of a conventional library and a new electronic network library.

The rise of the internet and digitalized content makes the policy makers librarians and public believe that the public library is losing its relevance. This conviction is reflected in the way a lot of libraries are transforming. The most clear and observant shift is that libraries are no longer describing their primary role as being a provider of information. The evolution of the role of library in society over the centuries from private resource to civic monuments to a functional building to living room of the city is today in flux. In this multiplicity of roles of the library extends itself further in service of a multi-faceted society, challenging conjectures of its impending obsolescence.

Libraries are civic spaces where knowledge is circulated in all media. The systematic arrangement of the data, the reading spaces and the interaction with the librarian, derived from a user pattern enhance the user experience. There will be spaces where these functions overlap like the reception spaces, the large atriums and the reading halls where there is visual and physical connection with the other spaces providing a multi-generational experience. The play of natural light and the expansive reading hall, the connection of the inside to the outside, formal and informal reading spaces, data collection (physical entities such as books, newspapers, magazines, is to computer rooms), provide a sense of volume to which the user relate, giving a dual experience to all kinds of people entering the library. Libraries also play a major role in providing literacy to the homeless, giving rise to knowledge societies.

The Need for Regeneration:

The reason that libraries continue to exist is their ability to adapt. Libraries adopt to the changing priorities and the changing economic status of their service areas.
Libraries being most democratic and community centric points are perceived to be under threat from a shrinking public realm one side and digitalization on the other hand. Today with social media libraries serve many customers who never even come to the library, but yet libraries must continue to build flexible spaces to accommodate new uses and new technologies. While libraries may need to house fewer physical materials, they need space for their members to generate their own materials and space for the community to come together and share ideas. Regeneration would allow public library to behave as community information, knowledge, resource and information center.

Provide access to knowledge in printed and other formats to support formal and informal education. To actively support literacy campaigns as literacy is the key to education and knowledge.

Provide access to major collections of the world’s literature and knowledge, including the community’s own literature. Make fundamental contribution to daily survival and social and economic development by being directly involved in providing information to people of developing countries. To provide basic user education.

To meet the needs of the children and young people.

An important role of the public library is providing a focus for cultural and artistic development in the community helping to shape and support the cultural identity of the community. This can be achieved by working in partnerships with the appropriate local and regional organizations. The public library has an important role as a public and meeting space. This is particularly important in communities where there are few places people meet, sometimes addressed as “the drawing room of the community.”

The library building situated in Kharghar will be a cohesive set of strategies for spaces, function , structure, climate sensitivity, vertical circulation wind and ventilation, biodiversity, urban ecology and iconicity.

Navi Mumbai acting as twin city to the city of Mumbai, is set to become a smart city. Kharghar, out of the 14 nodes of Navi Mumbai is identified as a “smart city” “brownfield project”, by CIDCO , to be developed having the state of the art amenities and plans for improving social and civic amenities. Kharghar as mentioned earlier is primarily a residential and institutional town, the home of major schools, colleges and educational institutions will be a booster for the viability and sustenance of the public
library.

The idea is to understand and establish relationship with the components being:

of the public library building generating the institution to behave as an open public forum and as a urban catalyst to keep stimulating the process of creating intellectual communities.

The spaces will be planned on the principle of flexibility and adaptability to cater to the current needs of user population, library staff, and library media along with the changing face of the public library as a social and cultural space.

Program:
Categories for Design Program are as follows:

The Vertical Zoning: The stacking arrangement of floor plates is based on the idea of compartmentalized flexibility where each floor plate is self-contained with a specific activity and the services required for its efficient functioning but still inter-related through the interplay of floor plates and a set of external stairs behaving as social spots.

The Façade: The façade grid has its origin back to the smallest component of a public library being “the book” which led to the development of a bookshelf. The façade/skin of the building is essentially consisting of 3

FRAMES each performing a specific function:
FRAME 1: active frame consisting of the bookshelf
FRAME 2: curtain glazing: weather responsive
FRAME 3: Skeleton or the interface of the building and the surrounding and vice versa.

The three frames form an integral part of the design as they also facilitate an alternative route of exploring the building with the external stairs allowing the users/readers to come across various activities at different levels. 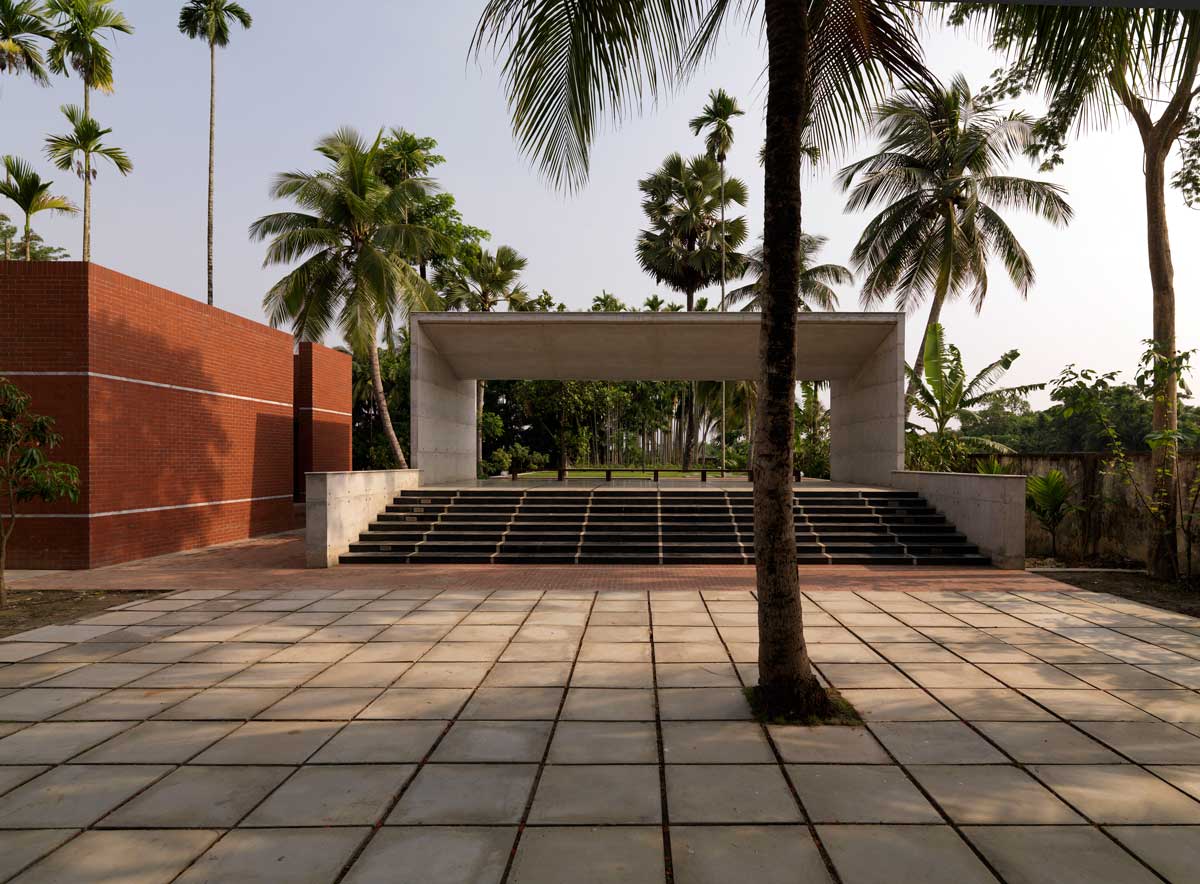 A Family Graveyard, at Botkhil, by Rafiq Azam

The graveyard is a metaphor that contains death and appreciates earthly life. In the process of temporal hustle and bustle, we often seem to overlook the fact that this planet is only a threshold space between the ‘foreplay’ and the ‘aftermath’ of life. This triggered the design to create a transcending space connecting the temporal to the celestial being through a frame made of concrete. -Rafiq Azam 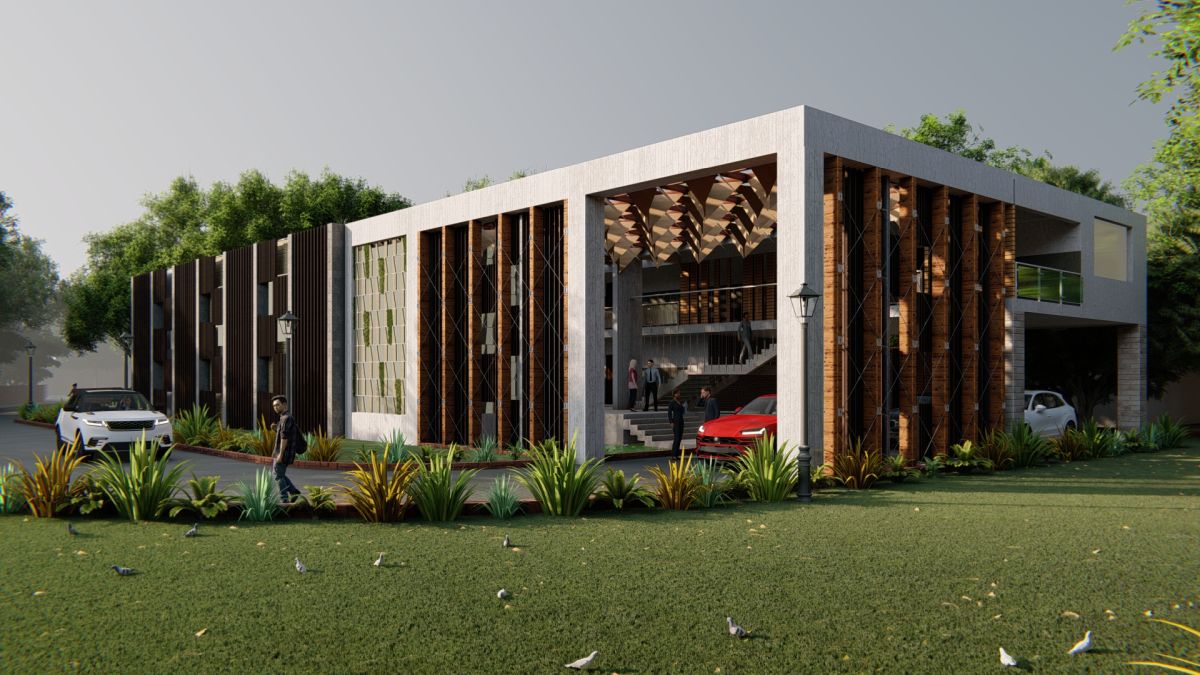 Unbuilt: Administrative Building, at Erode, Tamilnadu, by The Bhargav Group

The Admin Block is treated in such a way green fields and lush pastures interact with the building add beauty to its environment and a serene entry to the Campus away from the hustle and bustle of main road. The building plinth area covers 6,675 square feet from Site area of 7,782 Square feet. Building area is divided 40% area of mezzanine floor with soil land fill and 60% area of other floor area, with double height space grand lobby enclosed with courtyard space treated with wooden Pergola at the top helps natural light enter into the space. – The Bhargav Group

Balaji Temple at Andhra Pradesh by Sameep Padora and Associates has achieved a very sophisticated level of abstraction: Praveen Bavadekar

The following critique for the Balaji Temple at Andhra Pradesh, an award-winning project designed by Sameep Padora and Associates, was shared by Praveen Bavadeker. Praveen Bavadekar is Principal at Third Space Studio.
The Balaji temple in Nandyal explores and abstracts the long tradition of the temple typology in India.

The architectural philosopher Andrew Benjamin wrote that every act of design was an act of repetition and that architecture is about exploring what not to repeat. This building too repeats or emulates certain tropes of the Hindu temple so that it is recognisable as a temple yet it doesn’t replicate those tropes but rather breaks them down to constituent parts to then again reconstruct it.