A Conjurer of Ecological Ideas, A Tribute to Anuradha Mathur by Edgar Demello

Our work looks at the shifting, fluid and the negotiable rather than the fixed, static and rigid. This view cultivates design that is infrastructural and catalytic, setting in motion materials and habitations that resonate beyond the scale of intervention on a given site.  ~ Anuradha Mathur.

With the sad and unexpectedly early passing of Anuradha Mathur multiple disciplines have lost a formidable mind. And, a most endearing persona as well. Architecture, Urbanism, Ecology, Academia, Research, Writing… the list is perhaps longer. Of course one cannot forget Art; her’s was a unique form of artistic representation of ideas that were both playful and profound at the same time. Seemingly repetitive, like the 24 frames per second of the movie camera format, but like in a film those series of ‘stills’ told a potent story. Sometimes a critique of the prevailing condition, often a solution to a perennial problem, but always another unique way of seeing, of thinking, of doing. For her, water and land were full of mythical stories, both ancient and modern, as well as, of course, historical realities. The Mississippi, the Mithi, the Hudson, the Ganga – representing the universality of her ecological concerns. She probed, each time, deep into the history of their sometimes symbiotic, at other times disastrous relationships. Rain, rivers, lakes, the seas on the one hand; land erosion, flooding, drought, environmental degradation on the other. And most often she was the ombudsman on behalf of the planet and, in a sense, perhaps its conscience keeper as well.

Along with her partner the architect/academic/researcher/writer Dilip da Cunha, they were a strong intellectual force on the ‘thinking architecture’ circuit around the University of Pennsylvania. Their’s has always been a collaboration of two distinct and cogent minds, each with its own sense of inquiry and fields of discursive reference. But what brought them into being a ‘single force’ was their shared method of conducting their investigative and imaginative research. For them, maps, surveys, overlapping histories and folklores morphed, through their imagination and their passion, into framing, montage, movement and narrative displacement in order to inform and represent their ideas. These were all harnessed into recreating their shared architectural positions and world views. These positions they discussed at great length (amongst themselves and with others) so it has always been difficult, indeed impossible, to separate one from the other in the work that they did. So when I say she, I could well mean both.

My professional association with Anu was around the turn of the millennium. She and Dilip had been working, for three years, on a magnum opus, Deccan Traverses, a critical reconstruct of history, land and resources. A project situated in south-central India. They were in the process of putting together a book and an exhibition on the subject. To them it was familiar territory. Dilip was born and brought up in Bangalore and Anu had made it her second home. I was asked to write a review of the exhibition that was to be mounted at the Glass House in Lalbagh. Going through the manuscript (and not being familiar with their work) I soon realised that this was a documentation of the landscape terrain that gradually took on a phenomenological dimension. Extrapolating from a very personal reading of this work one could detect two distinct strands that gave it its vitality and its validity. One, the gravitas of their documentary findings and the other the exquisite representation of the ideas. Indeed it became the hallmark of the way they worked. In my review I remember referring to Deccan Traverses as a gesamtkunstwerk. 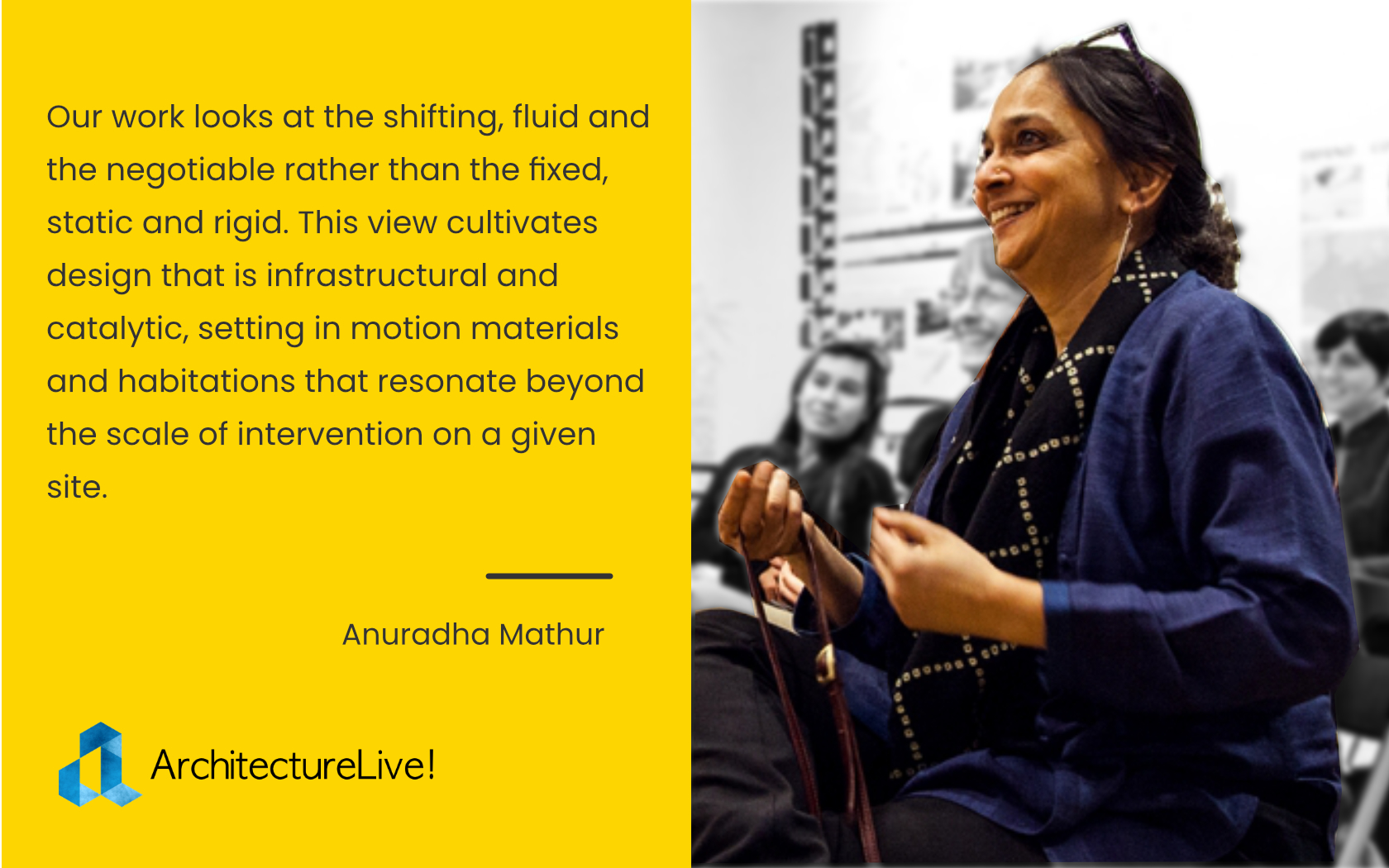 ‘Our work’, she had said, ‘looks at the shifting, fluid and the negotiable rather than the fixed, static and rigid. This view cultivates design that is infrastructural and catalytic, setting in motion materials and habitations that resonate beyond the scale of intervention on a given site’.

For me she had said it all.

Anu was aware of the intellectual schism that only widens when scholarly research and creative explorations were unable to make a visible impression on the land. Either due to a lack of vision of government agencies or through a singular reluctance for providing funds for, what is now being referred to as, future collectives. But Anu and Dilip continued their critical practice with relentless forays into sometimes lesser known territories. With strategies that will have transformative effects on our thinking and understanding of the planning processes for re-imagining the future. And through that, a visible impression on the land will emerge by the people they inspired. That is the hallmark of a true academic.

In more recent times, they have collaborated with a Bangalore architect on competitions, project works and, at times, provocative engagements with the city. One such, DC: More Than a Sum of its Parks, was perhaps closest to home. From the global to the regional to the local, so to speak. It is an inventive investigation into the linking of three parks in the Defence Colony of Bangalore. Provocative because its fundamental premise is: ‘Can parks be more than a place of quiet, leisure, a daily constitutional and a  place to play? Can they also be agents of change… agents in cultivating a productive as well as a scenic landscape, agents in building resilience and self reliance for communities…’? Once again there are discreet design shifts and hidden infrastructural connections that reframe the relationships between landscape, architecture and engineering. Surely a strategy few DC residents imagined possible! Will it stay (seductively) on paper or will it make a thought-provoking impression on the land?

Spreads of ‘DC: More Than a Sum of its Parks’ from the book Unbuilt 2.0: Architecture of Future Collectives
Read more about the book HERE.

Anu and Dilip had acquired a small plot of land in north Bangalore and were in the process of designing and building a house cum studio. Even at a scale microscopic compared to what they were  otherwise engaged in doing, this was an intense collaboration as well. A labor of love, surely. I could well imagine the intense arguments, especially in the process of structuring the brief. The idea of separating two blocks with an unbuilt and large threshold space in between; the sinking of the studio to mitigate the noise that might emanate from a nearby ring road; the separation of the more public from the private (and quiet) spaces at the rear, linked through a bridge. And, importantly, provide another stairs to an independent terrace floor ‘loft apartment’. All requiring consensus planning and careful detailing. When it was done Anu invited me and an academic friend they had known in the US for a tour of the house. They were waiting for us at that threshold; it was a joy to see Anu, a charming and elegant figure-ground for their architecture unfolding around. Her partner Dilip alongside, the perfect counterpoint. It was a tour de force, to give another meaning to that phrase. Anu’s winsome smile – she did it through her eyes as well – and Dilip’s rakish informality and humour were in evidence over the next hour or so. From the conceptual to the emerging, from holding ground to letting go, from the idea to the detail, it was a marvellous lesson, from them both, in productive collaboration. The product had made an impression on the land.

14 dormitories of IIM Ahmedabad to be demolished, Riyaz Tayyibji responds

Riyaz Tayyibji responds to the IIM Ahmedabad’s desicion to demolish some dormitories, part of the campus designed by Louis Kahn in 1962. 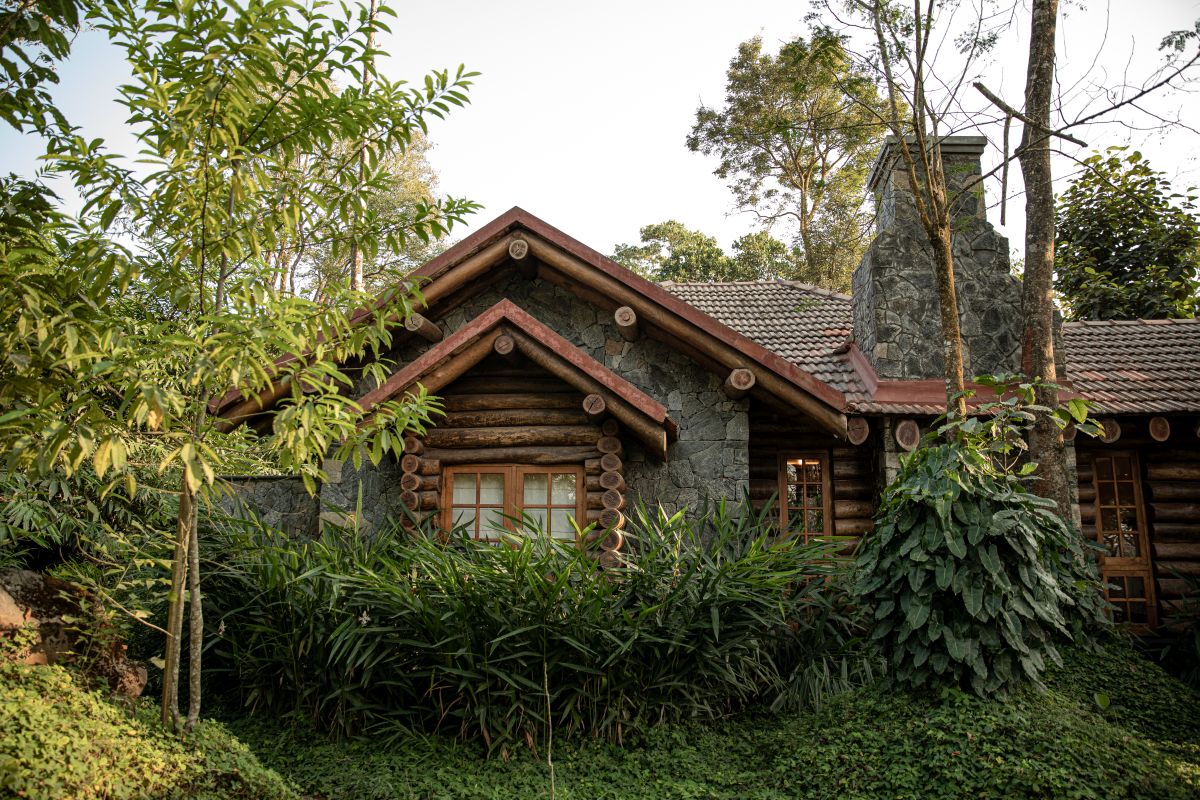 Stone Lodges – Private Residences are spread across a forested hillside. Built on sloping land on the side of a mountain, they are inspired by the grammar of Mountain Lodges and the native design aesthetic. – Earthitects 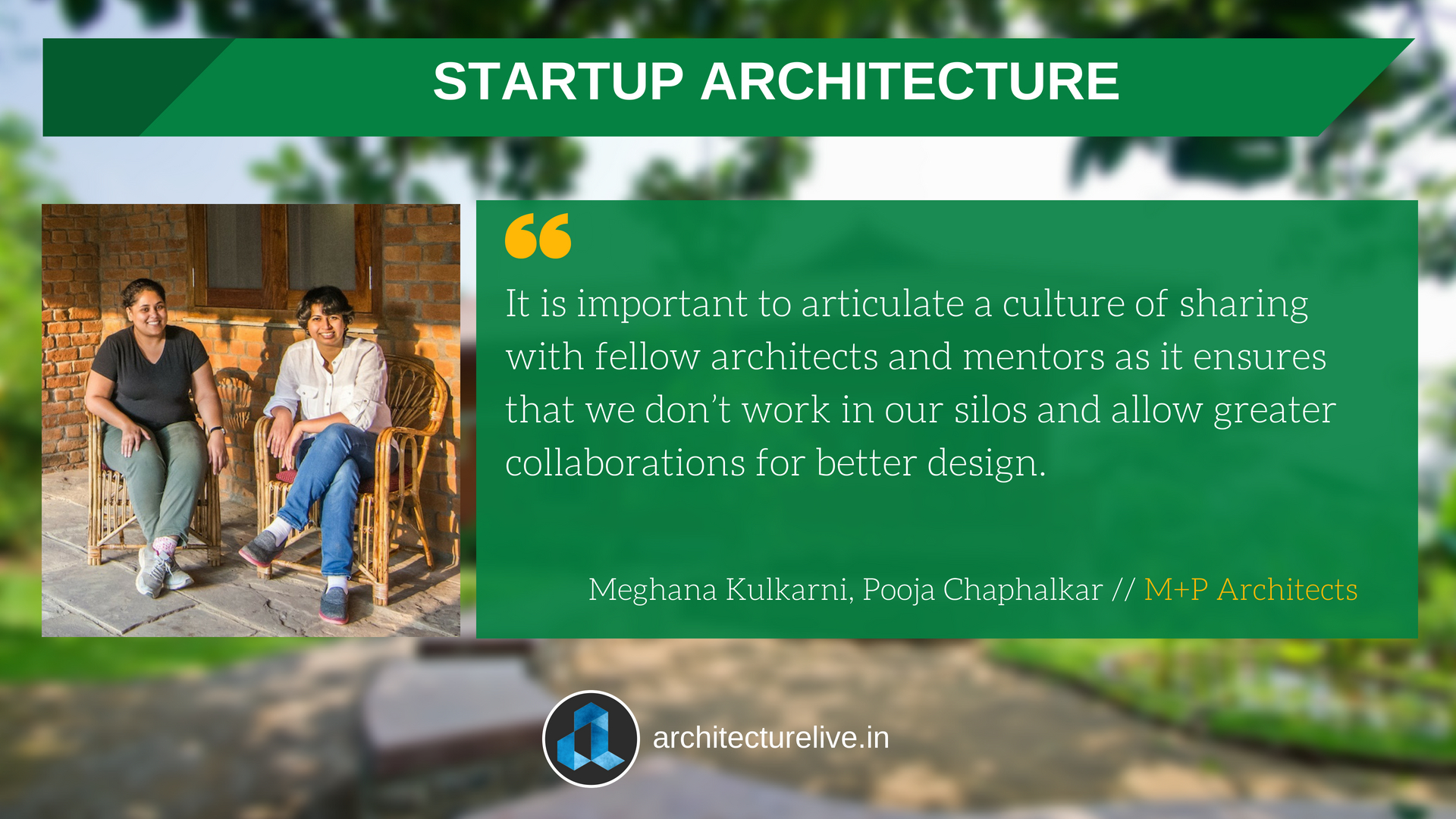 “We believe that like any building, a stable foundation is a must for your practice.” – Meghana Kulkarni and Pooja Chaphalkar, M+P Architects

Today, on the subject we open the discourse with Meghana Kulkarni and Pooja Chaphalkar, principle architects and co- founders of M+P Architects, Pune. Having started a collaborative endeavor in 2013, M+P Architects have collectively as well as independently procured and materialized several design projects in a course of less than five years since their genesis.