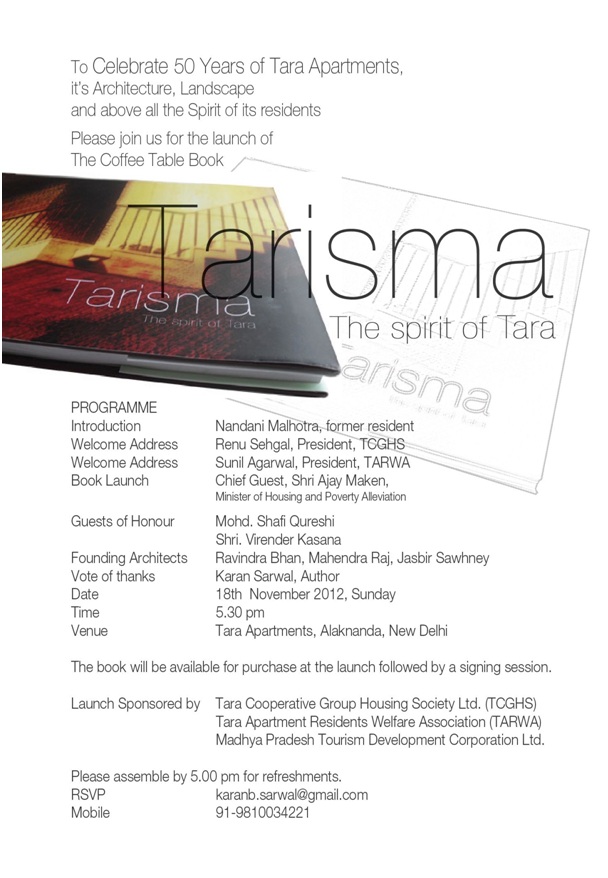 Intro to “Tarisma” by Karan Sarwal

There are books on architects.

And there are books on architecture.

But rare is the book devoted exclusively to just one work of a world-renowned architect, that too almost 40 years after the building was completed, where the author is not himself an architect and, moreover, is making his debut.

Such a book is “Tarisma”, by Karan B Sarwal, an ode to Tara Apartments in New Delhi, a low-rise group housing complex designed by Charles Correa in the early 1970s. Sarwal, whose family has been closely associated with Tara Apartments, from late 1960 when the building was but a twinkle in the owners’ eyes, has painstakingly traced the course of events of more than half a century. Meticulously detailed, “Tarisma” is more biography than history, and sees Tara Apartments as a living, breathing, evolving organism with a life and identity of its own, much more than just the brick, mortar and exposed concrete it is constructed of. A labour of love it is – the book is entirely self-funded by the author – but the passion and commitment with which he pursued his goal is inspiring. Unearthing old records, minutes of meetings, archival photographs, architects blueprints; interviewing residents, old and new – all this took years of dogged work.

Watch the video below:

Sarwal personally interacted with all the players concerned, including the formidable design team responsible for making it the iconic building it has become. He travelled to Mumbai to meet Correa, who was genuinely astonished that some four decades later, an owner-occupant would actually seek him out to thank him for the lovely building he had designed – now how often does that happen? Delighted, Correa even revisited Tara at Sarwal’s invitation, along with Jasbir Sawhney (principal architect), Mahendra Raj (structure), and Ravinder Bhan (landscaping).

Tom Wolfe, in his scathing indictment of modern architecture, “From Bauhaus to Our House”, had remarked insightfully of architects living smugly with their clever theories in their ivory towers and giving nary a tuppence worth to the end users experience and evaluations. “Tarisma” is a gentle riposte to that observation, and reminds us that yes, sometimes, there are happy endings.

For more details and to order the book, please CLICK HERE: