The conceptual idea of the built form arises right from the site itself, the shape of the site is an irregular quadrilateral, where none of the two adjacent sides are perpendicular to each other. 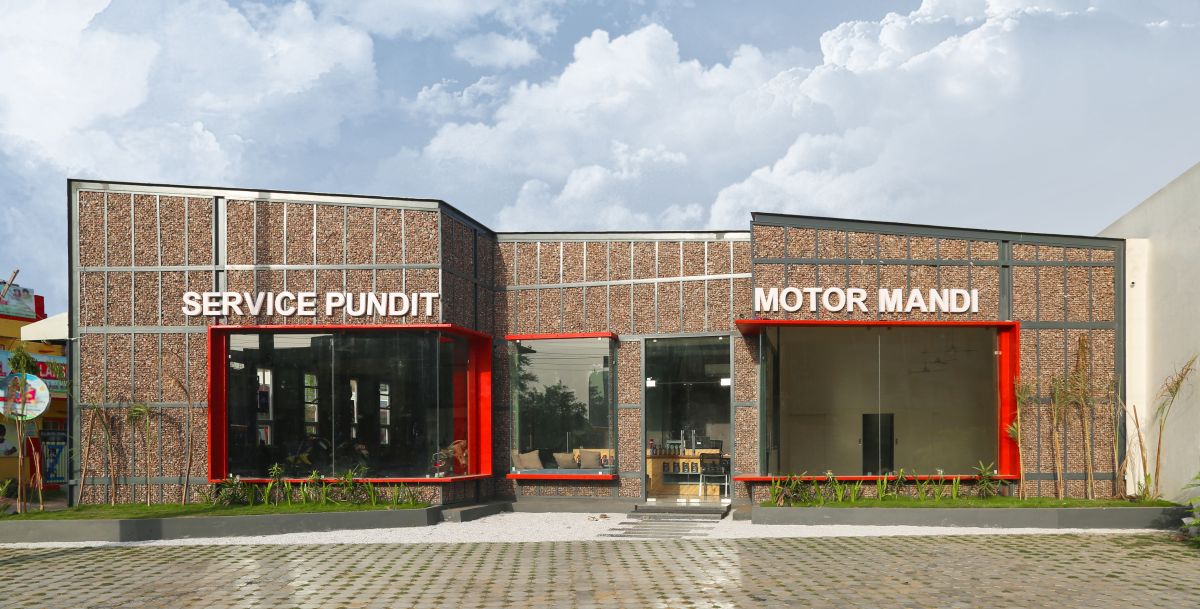 The conceptual idea of the built form arises right from the site itself, the shape of the site is an irregular quadrilateral, where none of the two adjacent sides are perpendicular to each other. Therefore, all four sides have a slight inclination in their linearity, but the front side is far more inclined at an angle of 25 degrees, in coherence with the main raod.

Therefore, considering the existing inclination in the front side, the slope in the elevation is restricted to just one direction. The elevation converges and visually fades following the plot line, and similarly respecting the form of the site, the point that is pulled out goes up to the highest point of the pitched roof, and as the point gets pushed backwards the slope in the roof gets to a lower point.

The entrance is slightly recessed inside while the two functional masses of the building are extruded, thus creating an inviting niche for the visitor. Since the space between Waiting Lounge – Reception – Manager’s Cabin was scarce, a Bay Window was incorporated as a creative solution for seating in the waiting area.

‘This window is inspired from the traditional window form in Rajasthani Havelis that were in turn used for light and ventilation, usually extruded outwards from the exterior vertical plane and bordered with arches and lattice work in form of jaali’s that also act as a railing to safeguard the occupant.’

Herin, to blend in with the contemporary style of the building the traditional bay window is transformed to adhere to the building design language with projections pulled out in metal frame and sheet structure, and the three vertical faces of the window are finished in clear glass to have clear visibility of the spaces inside. Thus, the boundary between the exterior and the interiror is blurred, playing on the dichotonmy of inside-out.

Thereafter, the two functionally separate built masses on either sides of the central block, are also provided with wide L-corner openings with box like projections where the frame is reversed to create seating on the exterior for multiple purposes- like seating, walking- thus, forming an interactive recreational space and a utilitarian public space. Again, the corner windows are finished in glass to achieve transparency resulting in Transparent & Functional Spaces.

The projection additionaly becomes an element of the façade, rendering both color and volume, with contrast to grey and rough stones in the background. The striking red makes the building look more vibrant and interesting , appealing to both the visitors and the passersby.

One of the major contraints in this project was time and re-use, therefore, it is a pre-fabricated structure in Mild Steel, which can be transported from one place to another, and the partition walls are done with laminated MDF boards, of standard sizes, such that they can be conveniently reused. 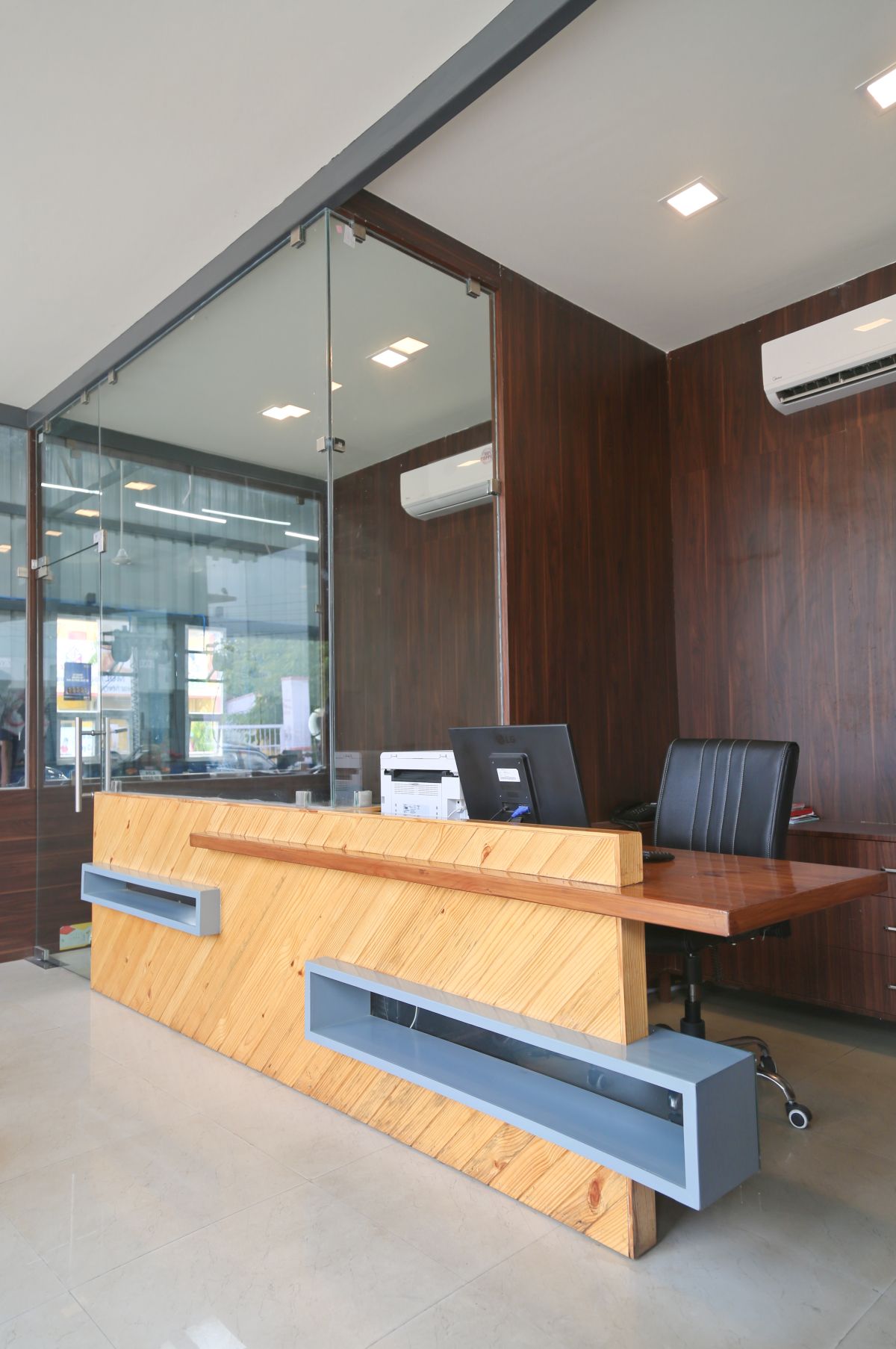 Time and Economy both are inter-linked, hence we planned to create the entire front façade with Stone Gabbion Wall as a replacement to the metal corrugated sheets which usually take up the exterior façade of a pre-engineered building. So the idea came with a few challenges, like :

– Water Clogging at the Base Point of Stone Gabbion Wall

– Buckling of Metal Wiremesh due to the weight of the Stones

– Thermal Gain Inside the Building

With constant research and on site efforts, all of these were profoundly solved, (refer to gabion wall sections for details). Finally, to sae up on cost and as a solution a few of the issues listed above aggregates were used instead of other options like sandstone, riverbed stones, rocks etc.

The site is located very much in the heart of the city, Mansarovar area. In a radius of 5km, there are restaurants, schools and colleges with a huge number of local residents, catering to their requirement of having a Two – Wheeler Service Outlet wherein multiple brand vehicles can be serviced and repaired. Project being located on a 100’ road, gains more visibilty and attention, therefore, along with extended services that they would offer to their customers even the building should reflect their identity, as unique and outstanding in the segment,which does justice to the choice of the location that was made by the client.

The client’s brief was to have transparency in between the areas of work, such that it’s convenient for the user to monitor and also the customer gains faith and interest if he can see the work that is happening on his/her vehicle, therefore, the three primary zones, Bay Area + Wash Area, Waiting Area + Reception – Manager’s Cabin are interconnected visually using glass partitions, which provides clear views over bay area for both the manager and the customer waiting in the waiting lounge, even the reception is visually well connected in the same manner, to both Service Pundit, which is the bike servicing segment of the building and Motor Mandi which will be a used bike showroom. 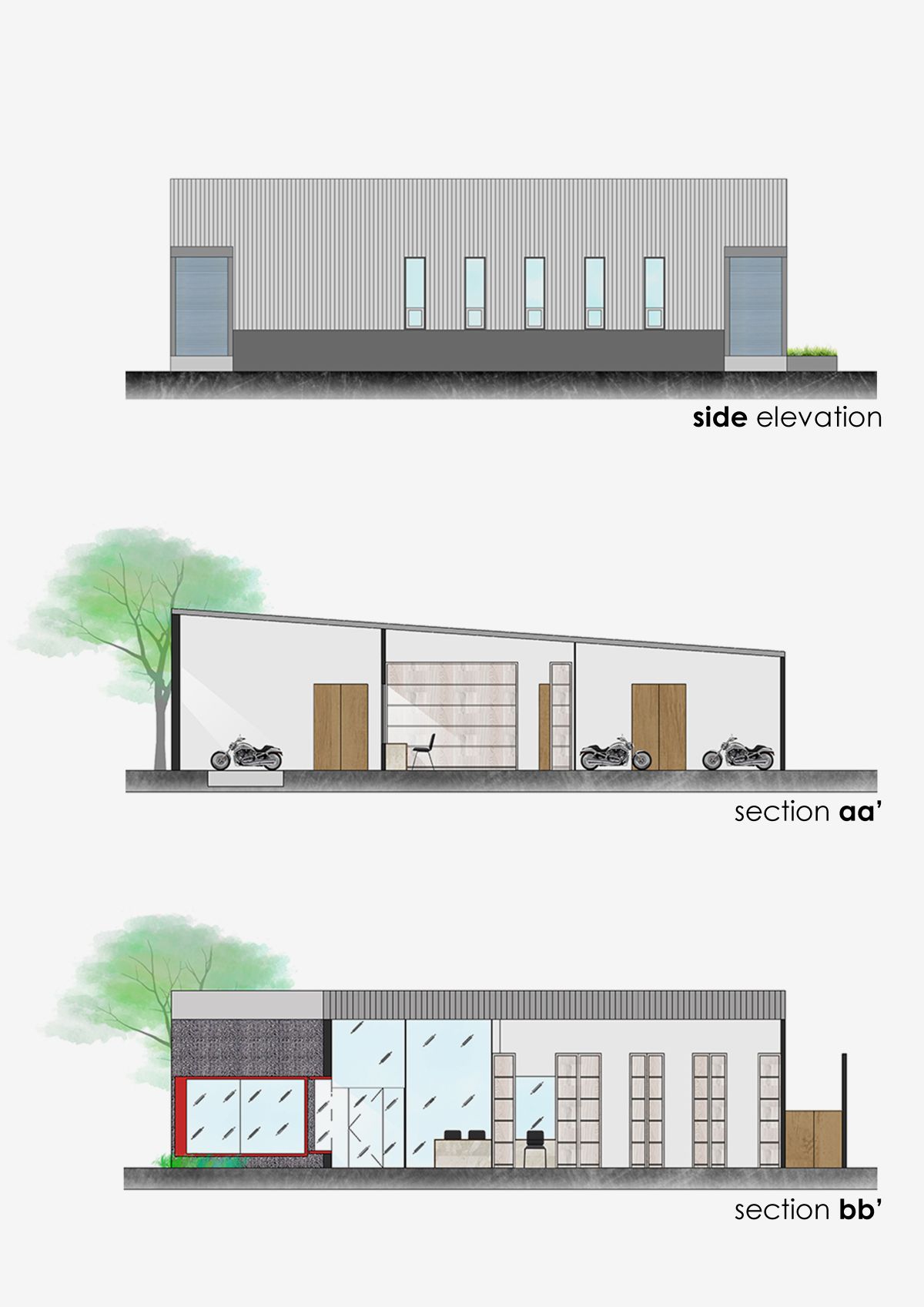 Thus, develops the centralized location for Reception, Waiting Lounge and Manager’s Cabin in the front central portion of the site, placing Motor Mandi on right and Service Pundit on left in the layout plan.

The project here revolves mostly around the front wall, which holds about 21 tonnes of stone weight distributed over multiple structural members with huge L-corner openings to let the transparency flow into the design is configured in four layers to achieve not just strength but also an aesthetical value of it’s own, which makes it utilaritarian space for the occupant. 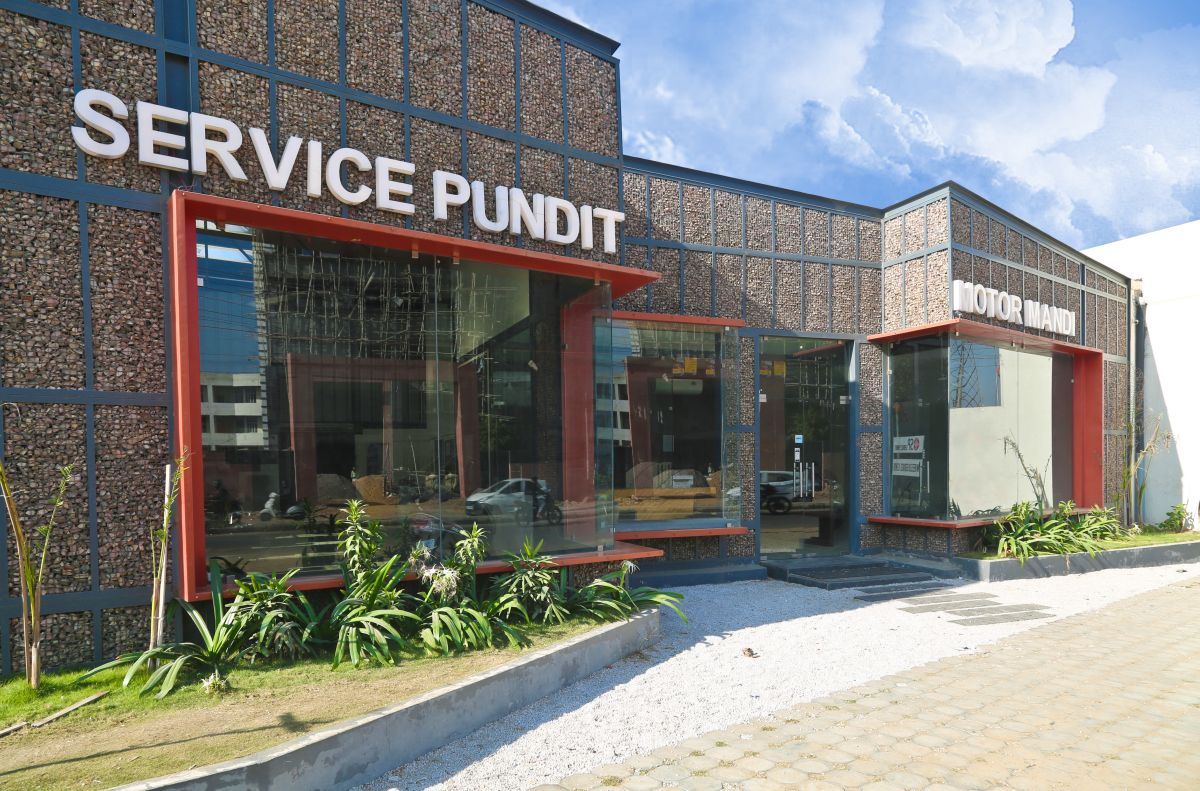 The projection over the openings were purposely painted in Red, to mark a striking effect to the commoner passing by, to lay over or pause for a moment and realise the existence of the volume inserted in the usual envelope of buildings around. 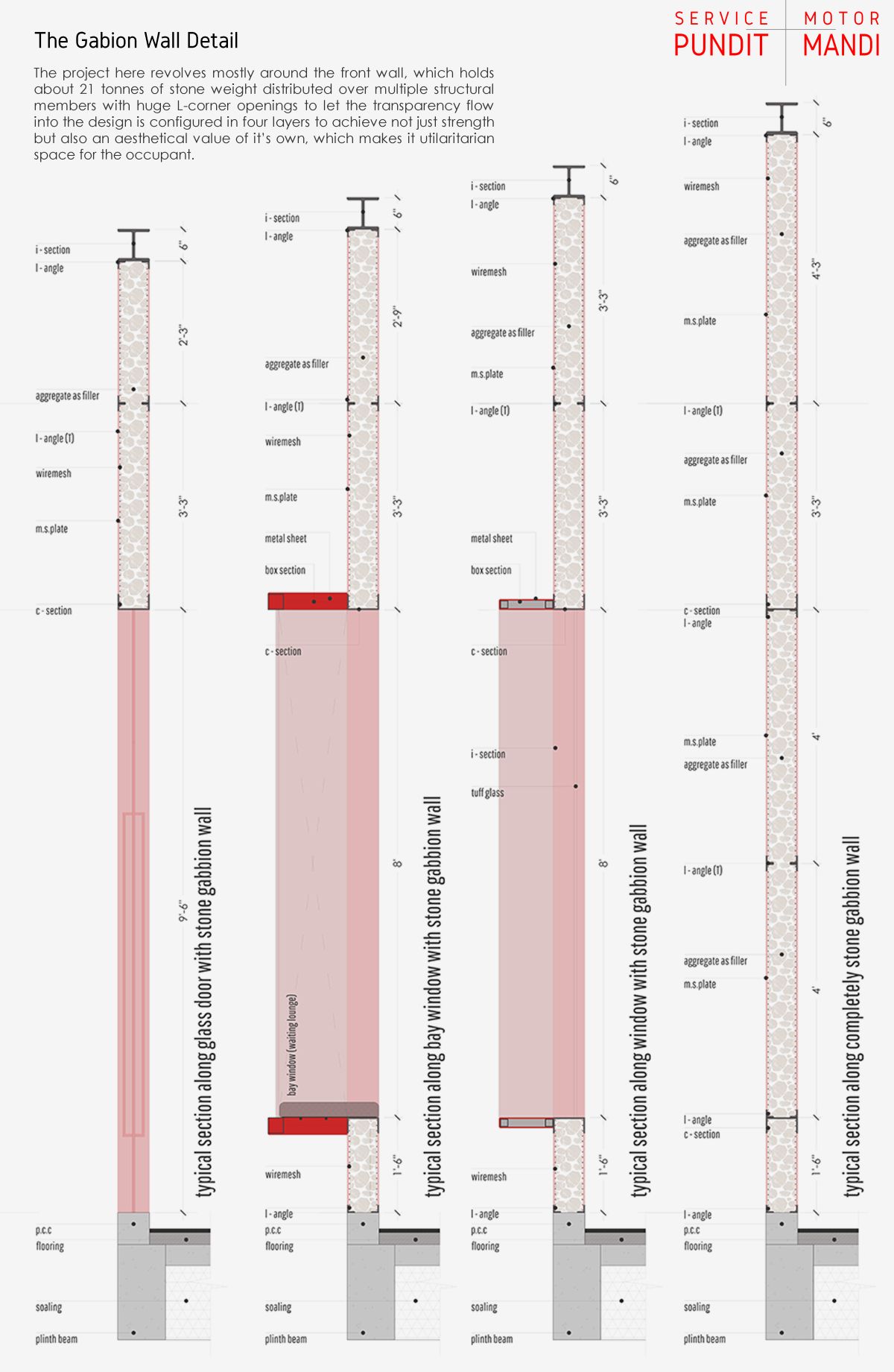 The project here revolves mostly around the front wall, which holds about 21 tonnes of stone weight distributed over multiple structural members with huge L-corner openings to let the transparency flow into the design is configured in four layers to achieve not just strength but also an aesthetical value of it’s own, which makes it utilaritarian space for the occupant 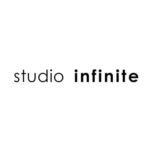 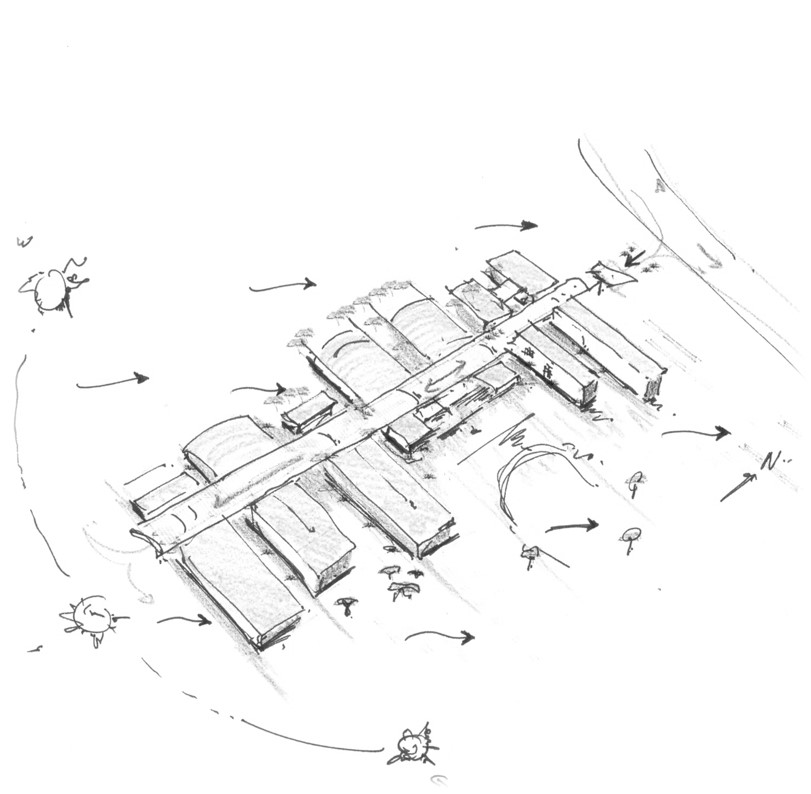 BAPS is a charitable organization with holistic and spiritual education as one of its key goals. This Trust approached the architect with a brief to build a self contained Girls school campus on the outskirts of the city of Gandhinagar, very close to Ahmedabad. 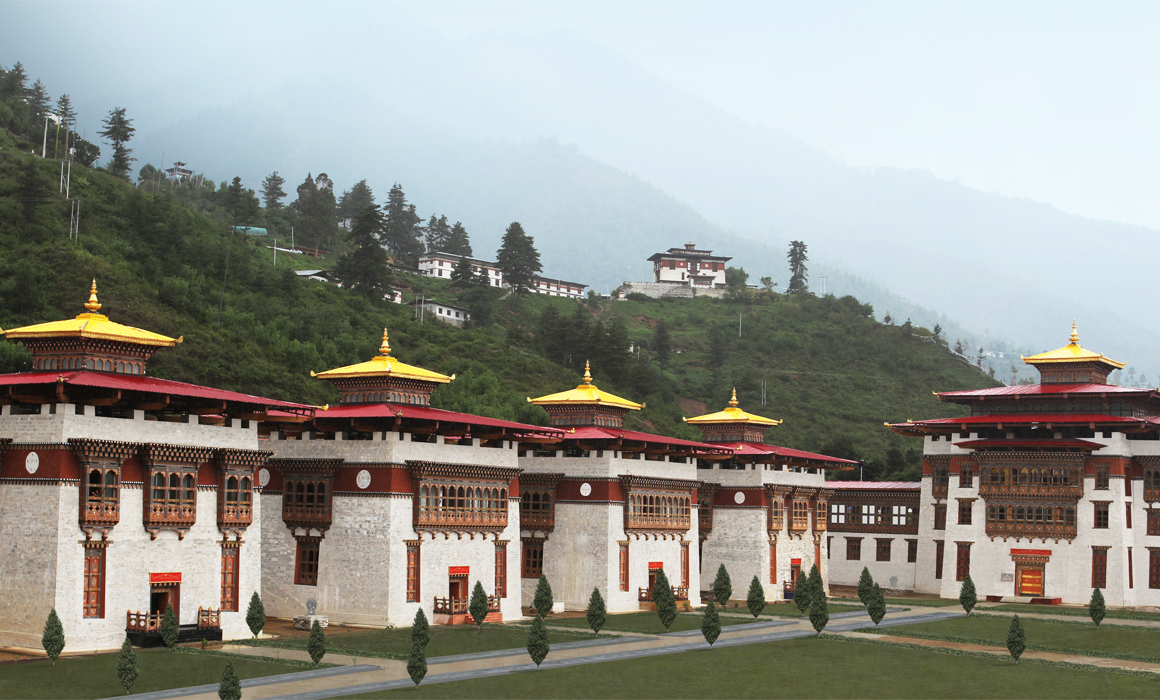 Thimphu, Bhutan  2006-2014 Text and Photographs: Christopher Charles Benninger Architects The Supreme Court of Bhutan is one of the critical components of the Bhutan modernization 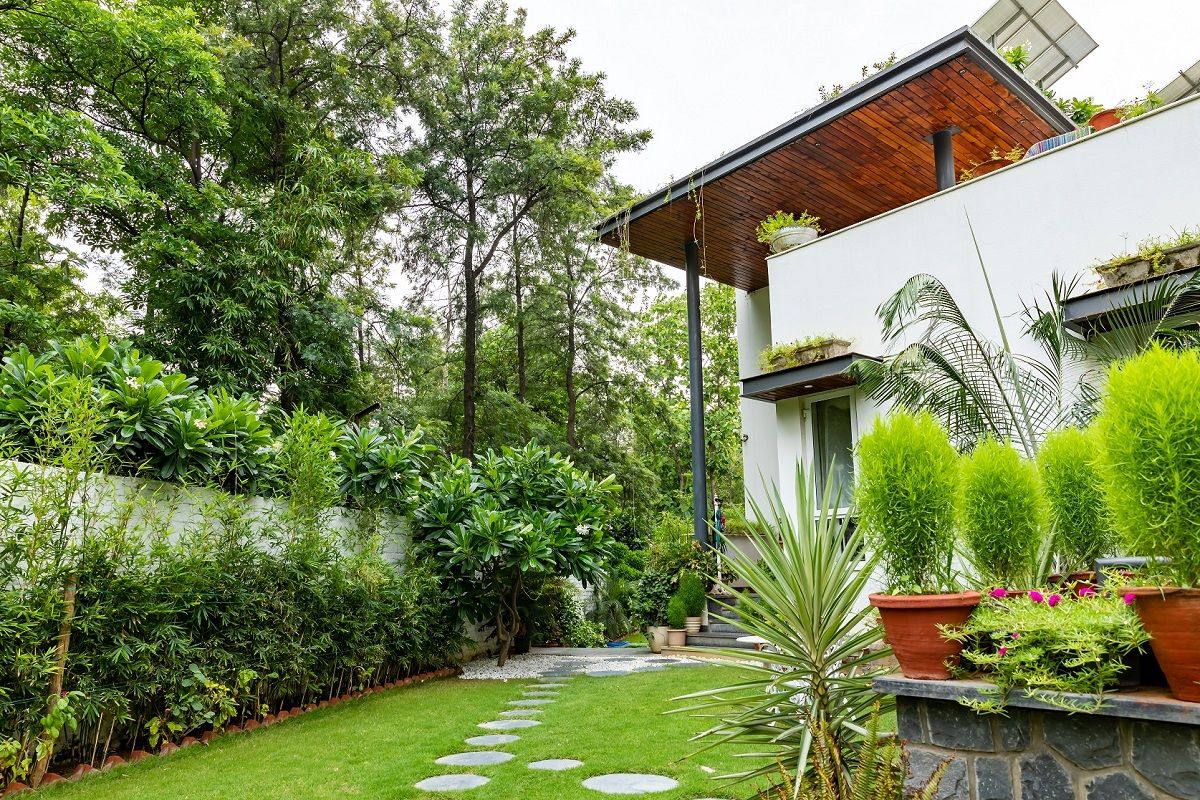 A House Surrounded by a Green Footprint | Ansal Villas, by RSDA

RSDA is a multidisciplinary design firm delivering architecture, interior design and strategic services across India. The studio, based out of Gurugram, was founded in 2003 by Architects Rakhee Bedi and Shobhit Kumar, both of whom came together to build a unique design firm. The firm acts as a one-stop solution by covering the entire process from conceptualisation to execution.