Review of the book, ‘Inhuman Architecture’ by Hugo Keukelhaus (1974) translated by Elmar Schenkel, and published by Studio Naqshbandi, Auroville, 2007. 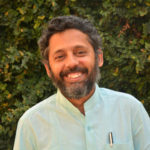 How relevant can a slim German book written by an educationist, and published in 1974, be for contemporary Indian architecture today?

Plenty. It is not a coincidence that this English translation of Keukelhaus’s ruminations on the humane and inhumane aspects of architecture has been published by Poppo Pingel, a practicing architect and one of the founding settlers of Auroville. Over the years, Pingel has sustained the inspiration of a meeting with Keukelhaus in 1982 in his own work and has been able to publish this translation (by Elmar Schenkel) in late 2007. Though over thirty years old, the passionate and well crafted argument speaks directly to all those committed to a humane approach to architecture today.

Keukelhaus focuses on school environments. The logic of this choice is immediately obvious, particularly given the typically paranoid school environments of the West he writes about. Since the school is the social environment the child is most immersed in during the formation of its personality, its design effectively shapes future citizens (or earth dwellers, if you like) too. But what Keukelhaus observes about a specific set of school projects (which, sadly, he does not name, so we cannot go back to old magazines or books to study them) is as true to different extents about many contemporary building types in India- hospitals, airconditioned (elite) schools, call centres and different office environments.

In his approach Keukelhaus approaches our bodies, nature and architecture as always interrelated. He refuses to see any phenomenon in isolation, and everything is formed in an ecology (‘Shape is the result of the interplay between growth “working from the inside to the outside” with resistance working “from the outside to the inside” ’, p.11). Most of all, he argues for an architecture that recognizes what the body needs beyond good ergonomics. One broad theme here is the necessity of stimulation and challenge for our senses. Another is the necessity of a dynamic, and changeful engagement with our environment.

‘A stupid wall is a surface deprived of processes’, says Keukelhaus (p35). Of course, the epithet ‘stupid’ is here transferred from the person who feels stupid in front of such a wall, to the wall itself. We feel stupid in front of some walls (usually blank) because they do not engage our capacity for recognizing or forming patterns. We also feel stupid (or as Keukelhaus worries, become stupid) when the wall refuses any relation with the rest of the environment including our bodies. By contrast, our relation to a wall is enriched when it corresponds to our own embodied experience of gravity, and of uprightness. This is vividly experienced in the notional wall that a row of columns sets up.

Keukelhaus’s critique of school spaces that damage the biological and psychological development of children is brief. It is therefore more suggestive than comprehensive. Doubtless, many objections to his argument can be imagined on methodological grounds.  And yet, his fundamental criticisms and suggestions are prima facie of great importance today when architectural form and space are either produced as industrial commodities or spectacles (often both). Its central question- How should we build so that architecture engages the human bodies that dwell in it as well as the larger ecosystem within which both are lodged?- is today often hidden behind a celebration of technique.

Keukelhaus’s essay reminds us that the homogeneity, lack of adventure and challenge, and the blindness to the human body’s way of engaging its environment that contemporary architecture aspires to can only damage our future. It is therefore a work that would be of interest to all concerned with building a humane and sustainable environment.