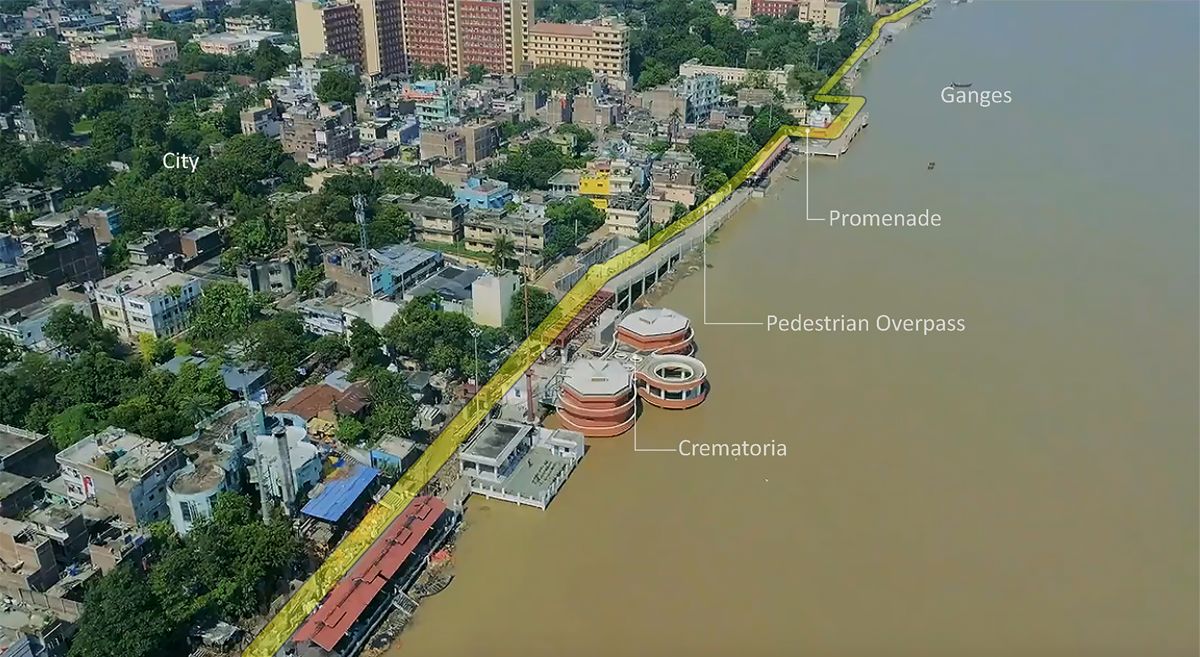 Patna Riverfront Revitalization project is a Public space and Landscape restoration initiative at the Old City in Patna. Engaging a historic stretch along the river, the proposed development includes 6m wide promenade, 4 community, education and recreational public building, public toilets, change rooms, lifeguard and first aid, food kiosks, way-finding and upgraded network of access streets. Physically the ever-expansive urban settlements have lost the relevance and reverence of water along with a connection to the ebb and flow of the river systems. Travel across Indian cities, you will find not only a disregard to this natural edge but also an exploitation – garbage dumping, toxic wastes and sewerage discharge. Their importance has been brought to fore by many environmental writers, activists and governmental schemes.

Historically, Patna ( old city Pataliputra) is a linear city planned along the Ganges and has a long history of evolution related to the river. Currently, uncontrolled processes of development, urban growth and garbage disposal have made the river edge redundant in the present context and the entire city now morphologically and typologically faces its back to the city. Physically there exists a meagre spatial relationship between the built form and the river. Some of the edge conditions that cause this- include dense urban morphology of old residential neighbourhoods which limit access to the river edge and building typologies that face their back to the river edge thereby leading to the edge being as a dumping and garbage disposal zone. The Riverfront Urban Initiative proposes a comprehensive urban design addressing vital civic concerns like safety during festivals, public space, lack of facilities along with environmental awareness and ecological restoration. Walking, be for recreation, health and simply a detour is central to the scheme and a 6-meter wide promenade is proposed that enables walking across the city riverfront. The promenade offers the residents face-time to the river and nurtures a collective civic mind towards it.

The existing urban river edge is a 7 kilometres stretch consisting of 28 Ghats-isolated and unconnected at the river edge. Although some of the Ghats are very well connected with the city and are actively used, most of them are only used at a local level due to their poor accessibility and connectivity to the city. The riverfront comprises of a thin strip of land varying from 30m- 50m as per local condition and much of is in gradient, the vision plan covered an area of study that was a complex mosaic of urban fabric varying from 400m to 100m from the river and bounded by the main transportation spine- Ashok Rajpath. The initial site assessments began with an elaborate study of connections from the main artery evaluating pedestrian, car and non-motorized vehicle access. Some ghats were also used as boat jetties that transported passengers and vegetables from the larger riverine villages and plains. Throughout the project, it has been vital to preserve and augment these connections to the river- both from city side and from the river to the city via boats. To ease out pedestrian movement during festivals, a network of loop roads and emergency access roads have been carved out of government properties. The essence of connection also lies in the interlinking of ghats and existing fragmented open spaces to provide a continuous public space along the river aiding in religious festivities and recreation. The open spaces on the river precinct between the river and Ashok Rajpath are of two kinds- residential neighbourhoods that have an extreme shortage of open spaces and densely built-up while others like university campuses that have the availability of the huge amount of open spaces. Land pooling, consolidation, developing access roads are key to the overall urban strategy to strengthen connections. Revitalization of underutilized institutional land with the government for public use is encouraged along with regeneration of function of unused structures to create public spaces and visual anchors.

A dense cluster of cities straddles the Gangetic Plain that make a complex network of trade and economy. Economics and planning have found a convenient nomenclature of metropolitan areas ( Delhi, Noida, Lucknow), 2nd tier and 3rd tier cities. Patna has found a place in this middle landscape and though historically very rich, it is currently undergoing a major urban transformation and emerging with a new identity. Myriad cultural forces are shaping this new thinking- Popular youth culture, families migrating to Patna from hinterlands, vibrant educational and coaching hubs to one of the busiest medical hubs in eastern India. A new 10-acre art park ( Rajdhani Park) to the New Museum by Japanese Architect, Fumihiko Maki ( Maki + Opolis Architect) are also reinforcing the cultural landscape. Due to the extent of the project ( 6.6km of urban edge) the Riverfront Project aims to stir up a renewed civic identity and ultimately hopes to nurture a Civic-mind to the Ganga River.

The Patna River edge built-character is an expression of surrounding land use, which varies between institutional, residential, and in other cases mixed use. Each of them has come into existence over time and are quite distinct in their morphologies. The institutional area for instance had been developed on principles of low-density distribution while the residential areas are relatively high dense localities. The needs of the precincts thus vary from point to point. It is integral to consider the edge as an extension to existing precinct characters and as a key urban element that integrates the local needs of space and quality. The Riverfront initiative acts as a platform to preserve and mend fragmented local spatial connections, enhance local potentials and create adequate open space standards for the city. Creating connections between institutional precincts and the river edge through establishing views or creating access, preservation of heritage structures and their integration with the edge would evoke a lost civic cultural essence and create a unique environment in Patna. Heritage sensitive zones have been assessed along with INTACH and designs surrounding them have been attuned to the overall built character.

The architecture of the projects is operative at three scales: ghat architecture at 20 locations ( 70m long stepped platforms at original ghat locations), small facility buildings at 7 locations and facility kiosks at each ghat and overall promenade. We are able to imbue this through strategic analysis of project phasing, land areas available during low water level, and impact of the urban project. Assessment of the existing visual language and built character were seeding grounds for further thinking on ghat typology, traditional chattri, and pavilions for the proposed 20 ghats. Since each new ghat varied from 50 meters wide to 70 meters wide we began to explore them as a combination of traditional ghat (steps leading to the water) to mini-plazas, shade canopy that would begin vary the experiential quality of the user for the overall stretch. Eight ghat design prototypes were prepared that could create an appropriate typology for the river edge in relation to the context. Integrating Ghats with elements like art terraces, shading systems, colonnades and mini amphitheaters and transform Ghats as collective space, spaces of pause, interaction, and leisure.

Urban Acupuncture: Buildings as an extension of ghat typology

The vision plan has proposed three community facilities and one electrical crematorium (Gulvi ghat) in the intervention stretch. These facilities are small buildings that cater to providing local needs of a community hall, reading library, river awareness centre for local schools. Their design is strongly influenced by the urban fabric and a dynamic urban typology of buildings is proposed that embraces the ghat typology in their conception. Such a positioning eludes traditional notions of the site boundary and seeks to integrate the urban fabric with the new infill project. A Café-Reading room is proposed on Patna College Ghat which is frequented by college students and the roof is amphitheatre. The Ecological Center at Collectorate Ghat, an important location for ferry transportation, the design is based on pilotis to provide a public space underneath the facility. The Community Center at Raja Ghat thrives on a view terrace and a performance courtyard, that can be used in local weddings and functions.

The completed project has provided the much needed Public Space to the residents of the City ( 5 million population) with thousands using the walkway at various times daily. Close to 1 million people use the walkway and restored Ghats during the local festival of Chatt ( Oct_Nov). The festival is based on the ancient tradition of nature worship with reverence to Sun and Water. The project benefits a population of 3 million persons in the riverine zone including Residents with new public space and health benefits, Fisherman with new toilets and improved boat mooring capacity, Low income communities have access to a new community hall and a new electric crematorium for the city. Additional benefits are attributed towards the 1 million religious tourists who visit for the Chatt festival in Oct- Nov for a week with improved access, safety, night lighting (festival ceremony happens at dawn) and way-finding. Night Lighting of the entire 7km edge has made the area safe and improved perception of residents. The improved public space provisions have greatly modified the perception of the Riverfront as a dangerous and dirty place. The project has reframed the public opinion about its natural heritage. Vegetable vendors (the majority who are women) are able to access supplies in boats and walk to the nearest vegetable mandi at Anta Ghat area next to the Patna University. The development of Electric Crematoria ( 2 pyres with a capacity for 30 a day) at Gulvi Ghat will help in reducing the wood consumption and next it would give more burning facilities. The project also envisages to improve interceptor drains to capture the sewage getting directly disposed to Ganga from the building along the ghat and then finally dispose them off at a city sewer manual to divert the same to an STP. A total of 8 such interceptor drains are being constructed. Several national-level campaigns have been held at the project site including physical trash skimming of the water surface, creation of sewerage treatment plants along the river to manage the direct discharge of sewerage.

Clients: The World Bank and National Mission for Clean Ganga/ NMCG and BUIDCO 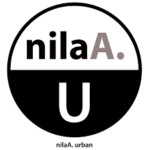