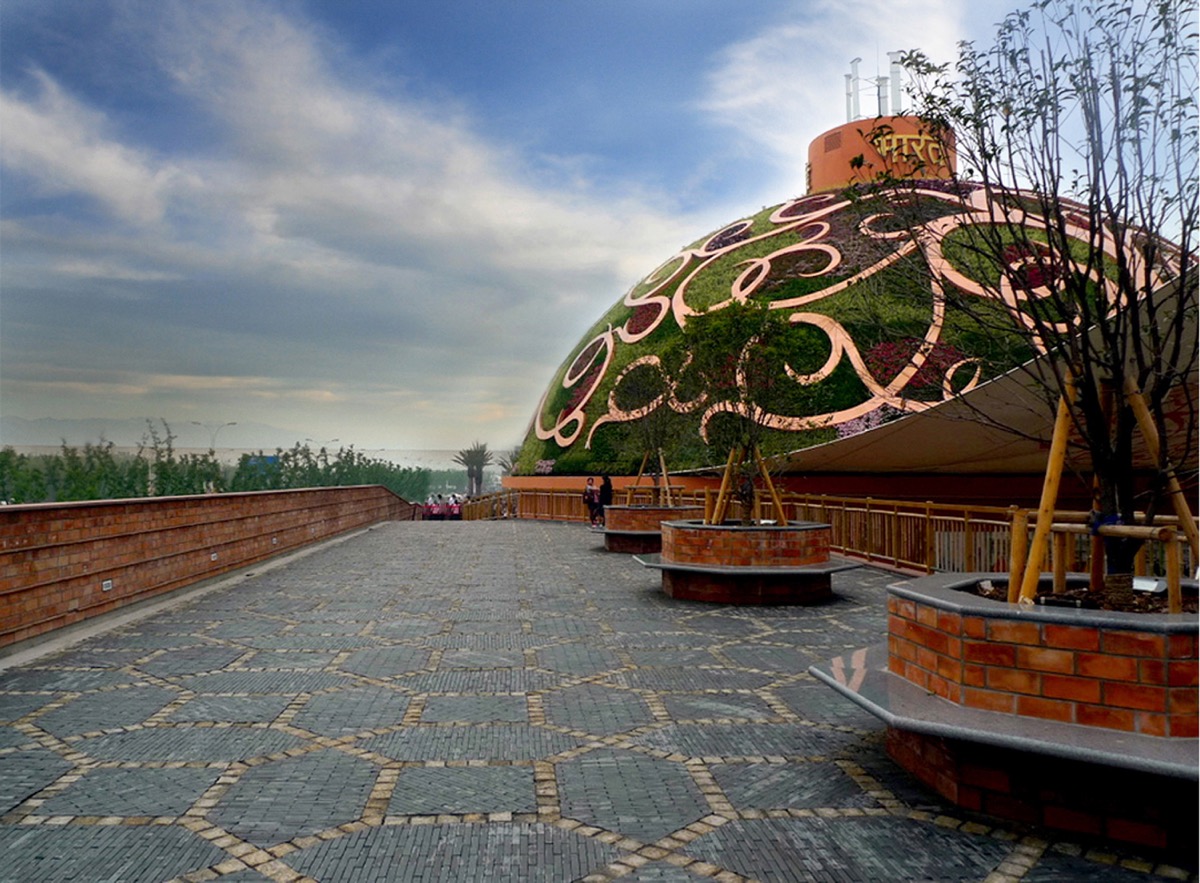 The Expo theme, “Better City, Better Life” is interpreted by India as “Cities of Harmony” and expressed as a future-looking pavilion grounded in the past, yet demonstrating action in the present. The place invents the future of our past, using the present for its realization. It hints at future materials: not energy consuming steel and glass, but evolved, intelligent use of ecological materials such as bamboo, ferro-cement and herbs. 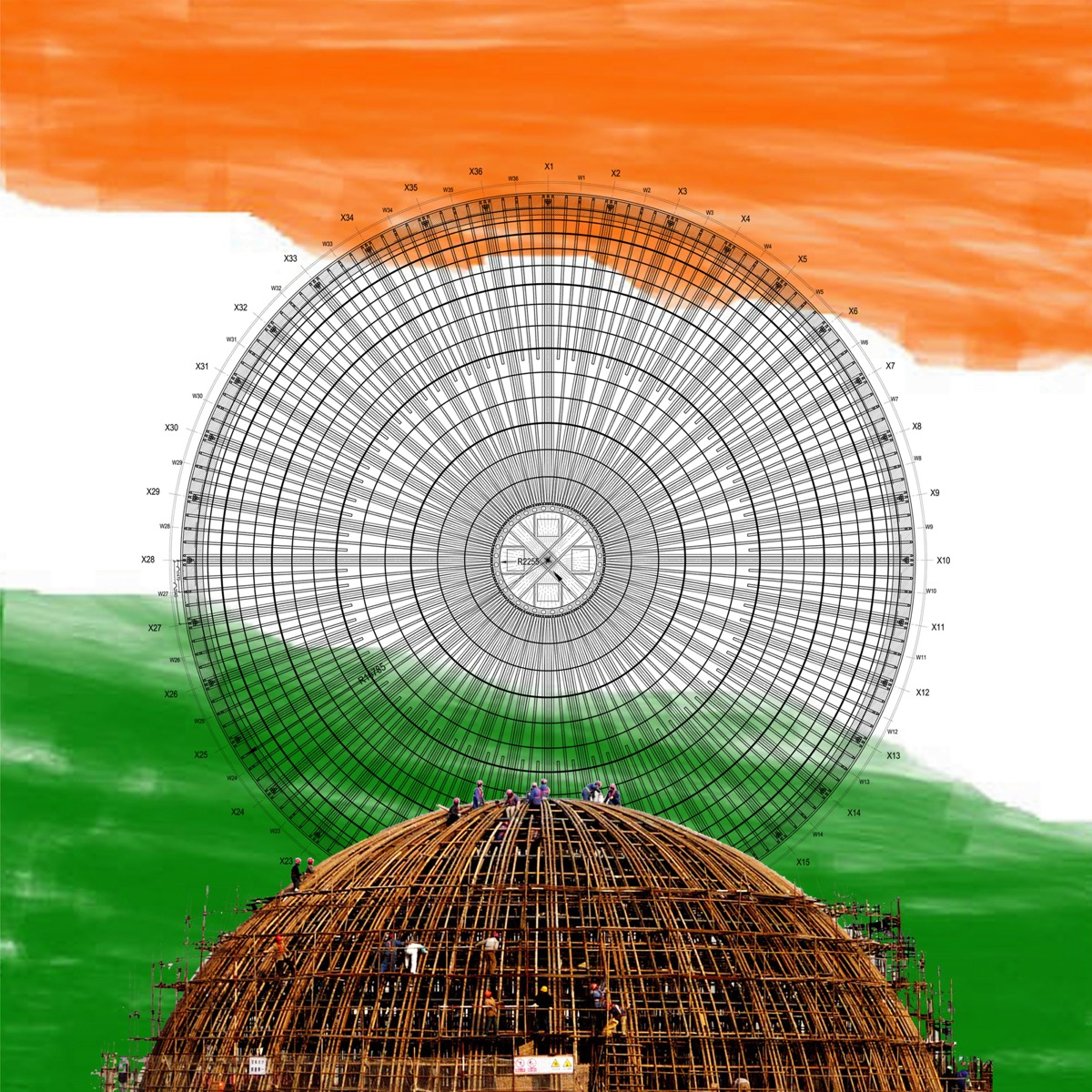 Within the context of an emerging Asian world order, India’s typical and unique value systems inform the design. The pursuit of opulence, needing to be maintained by ever-increasing resources, is replaced by the creation of abundance. Less does more. A small ecological footprint rather than wasteful consumption creates cooperation with nature. The attitude is symbiotic rather than antibiotic, aiming for fulfillment rather than blind achievement.

Celebrating India’s great cultural heritage and its diversity, the design is grounded in the nation’s existing pool of science and technology and projects the co-evolution of the urban and the rural.

Duality is a metaphor for India herself and becomes the underlying pattern. The duality is reflected in the two spaces of the courtyard and the dome. They represent space that is open and covered, both possible in tropical cities. They represent the boundless and the bounded, informal and formal. The pavilion becomes a metaphor for the Bazaar and the Temple, Rural and Urban, the Past and the Future.

The Court and the Bazaar

Past carved terracotta panels that tell the ancient Jataka stories about the interdependence of humans and nature, the visitors enters under a vaulted portal with the Tree of Life carving inspired by the stone carving from the Siddi Syed mosque at Ahmedabad. 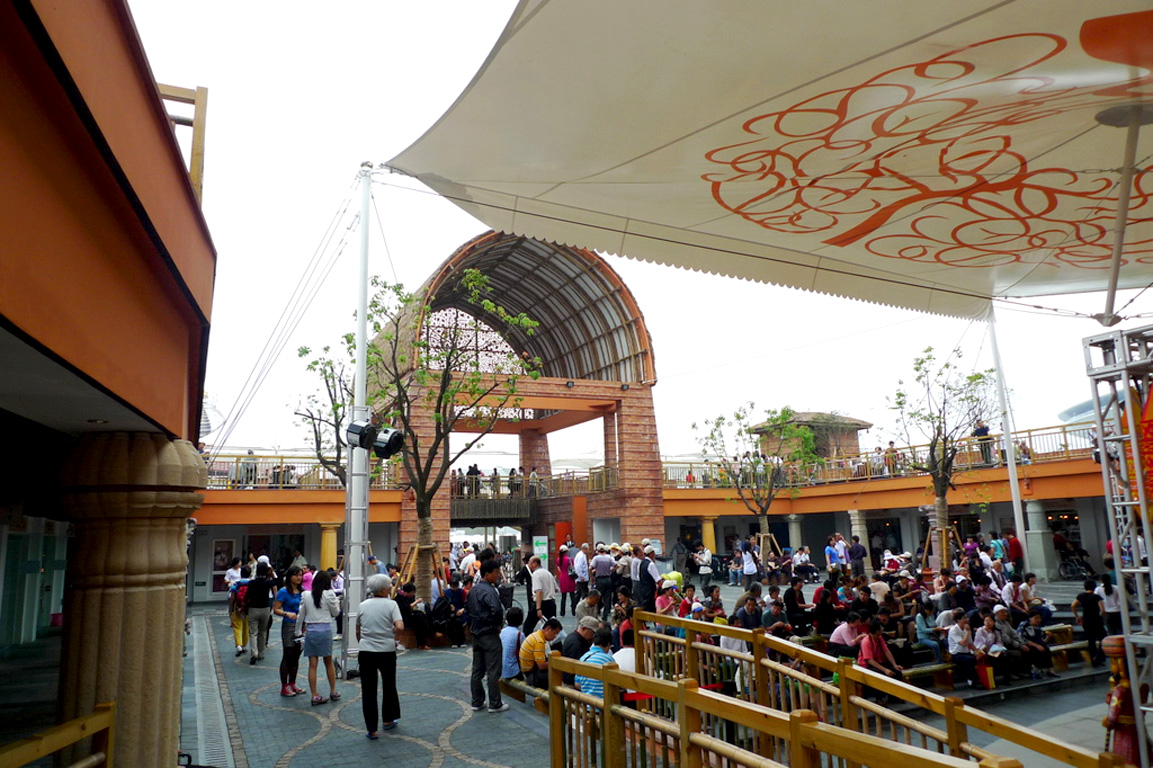 The entry plaza is a showcase of Indian artisans and handicraft, cultural shows, displays, shops, eateries, together showcasing the diversity of India and yet its unifying harmony. It is dynamic and changes over the day and with each season. It is cooled by lightweight cloth shades and trees, interpreting this mall as an outdoor bazaar, inclusive and not gated, a human celebration of the future tropical city. The terracotta and stone floor is inspired from the palace at Rampur in Varanasi.

A small amphitheatre at the end of the court hosts cultural shows at specified times. The shops are framed by a colonnade that is a collage of various traditional Indian columns. The mezzanine floor over the bazaar is for displays, a gallery for enjoying the activity below, and an outdoor restaurant area.

The Theme Section expresses harmony through its large bamboo dome – a herb roofed, indoor space provided with low-level air-conditioning. Inspired by the Buddhist Stupa at Sanchi, it rejoices in a common cultural thread between the host nation, China, and the guest, India. The Tree of Life is echoed in the pattern of the herbs. 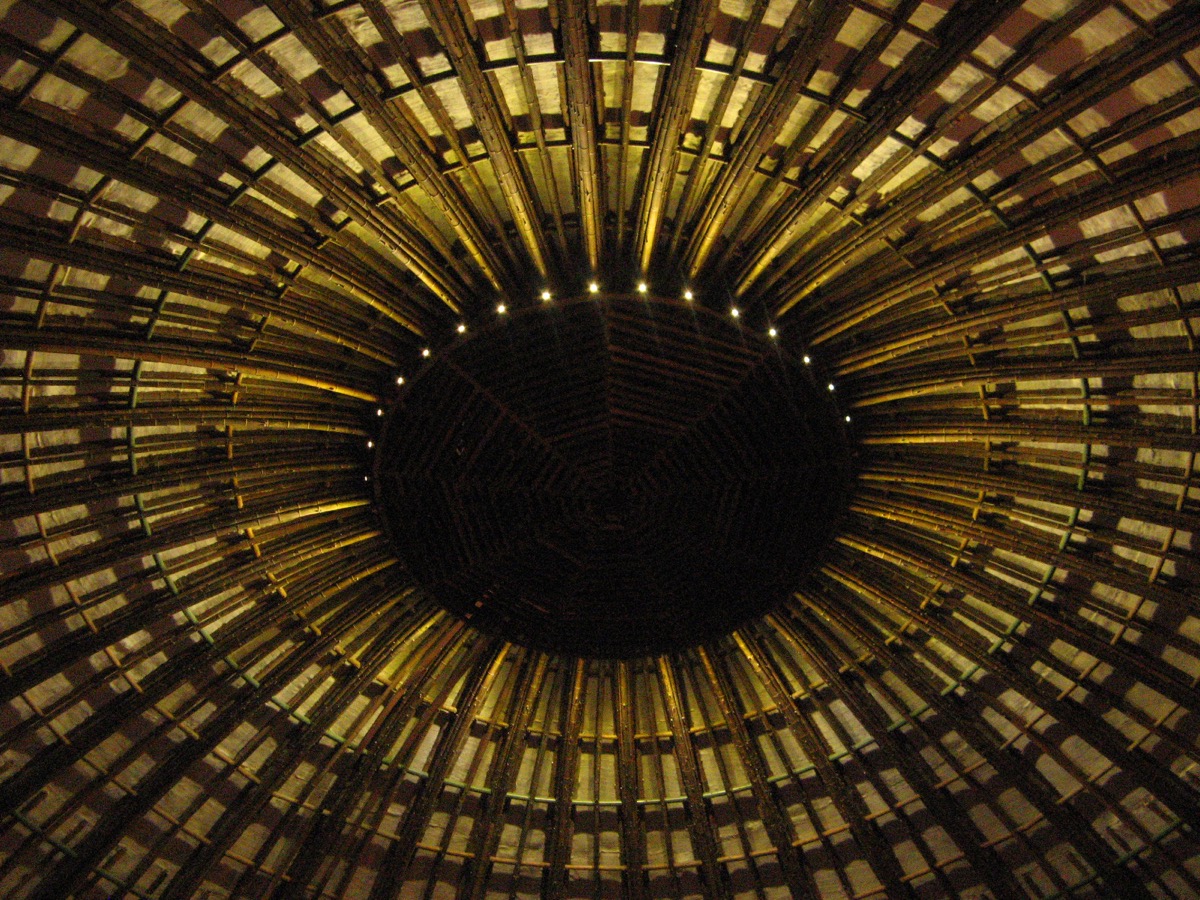 The dome is a Moso bamboo space grid with steel grouted joints. The micro-concrete dome surface is created on site by hand. An innovative system stapled fabric forms the mounting surface for herbs and solar cells, in a stunning composition with the Tree of Life in copper, topped by a small aero-generator. The organic herbal, medicinal shrubs in the trays are a carbon sink and purify the air. 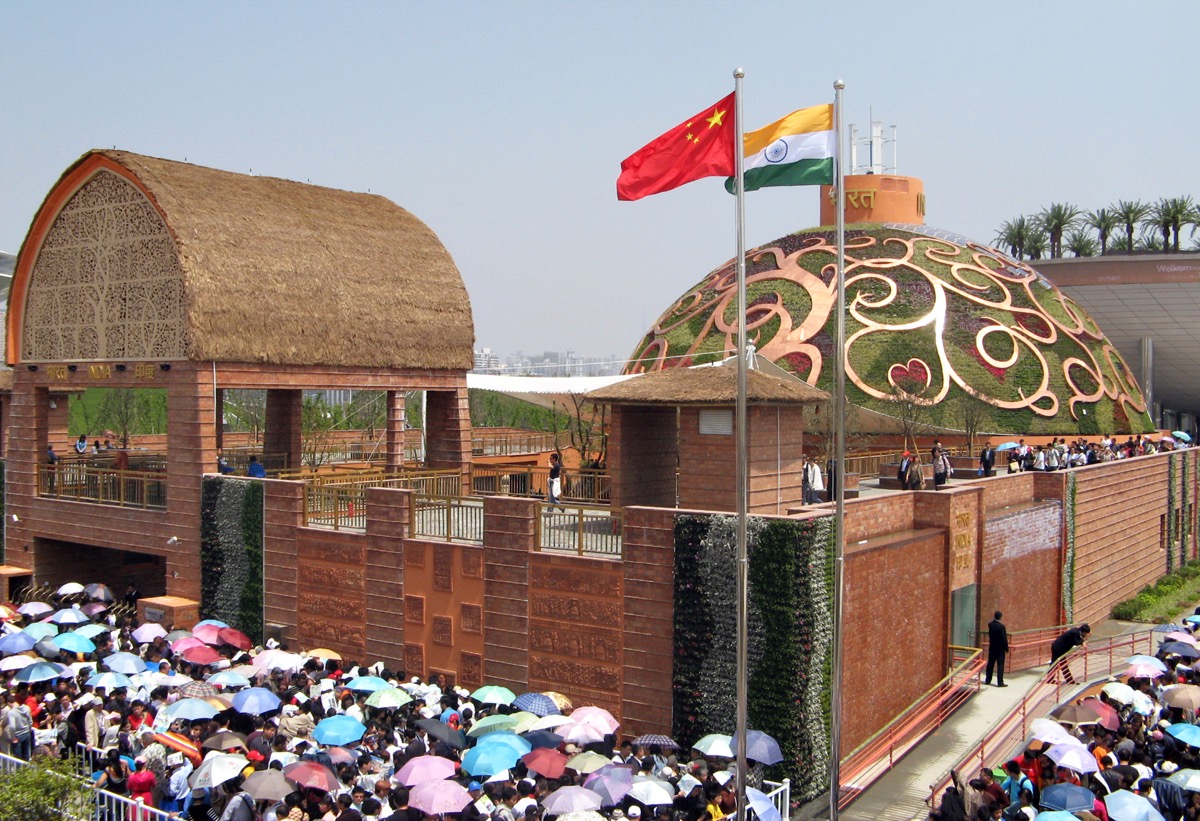 The courtyard and the dome harmoniously complement each other. Domes and vaults are an integral part of Indian architecture, of all religions and regions, and are perfect symbols of harmony in diversity. 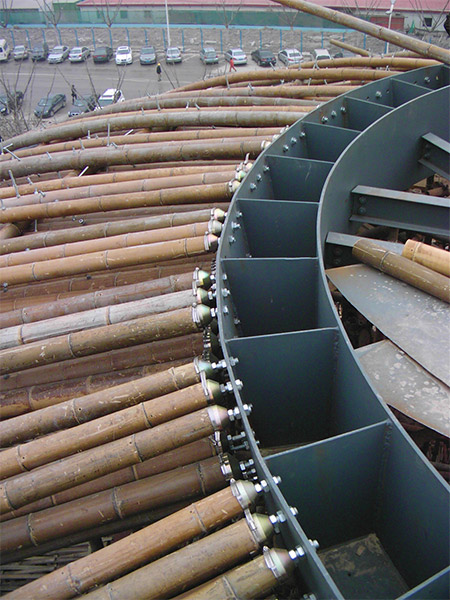 Large parts of the pavilion can be knocked down to maximize re-use at the time of handing the site back in the state that it was, such as the steel piles that form the foundation, or the dome itself.

The design is a distinctive, complex Indian response to the modern minimalism of tensile structures or geodesic domes globally, in that it uses the material in a craft-oriented, trans-modern way.

State-of-the art low-energy efficient systems are used for cooling and lighting. A small windmill and roof mounted solar cells integrate renewable energy which is generated at almost all times. The India pavilion is a zero-chemicals area with safe runoff and no effluents.

A design of this complexity requires a wide, interdisciplinary team.

The main designer, Design-C, a unit of HTA Pvt. Ltd. India, is one of the foremost exhibition design companies of India, which was commissioned by the owner, India Trade Promotion Organization, Ministry of Commerce and Industry, Government of India.

D R Naidu, the head of this design team, conceived of the idea and developed the design with the support of a consortium of four leading Indian architectural firms:

Environmental Design Solutions (all from New Delhi) and

Integrated Design (Bangalore), who were also the landscape architects.

The structural design team was led by Dr. Prem Krishna. A special design contribution has come from Dr. Simon Velez of Columbia, who guided on the construction and training of the workmen.

The piped and ducted services are designed by McD Berl and the wired services and general lighting by Lirio Lopez. 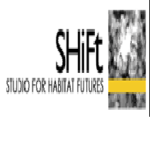