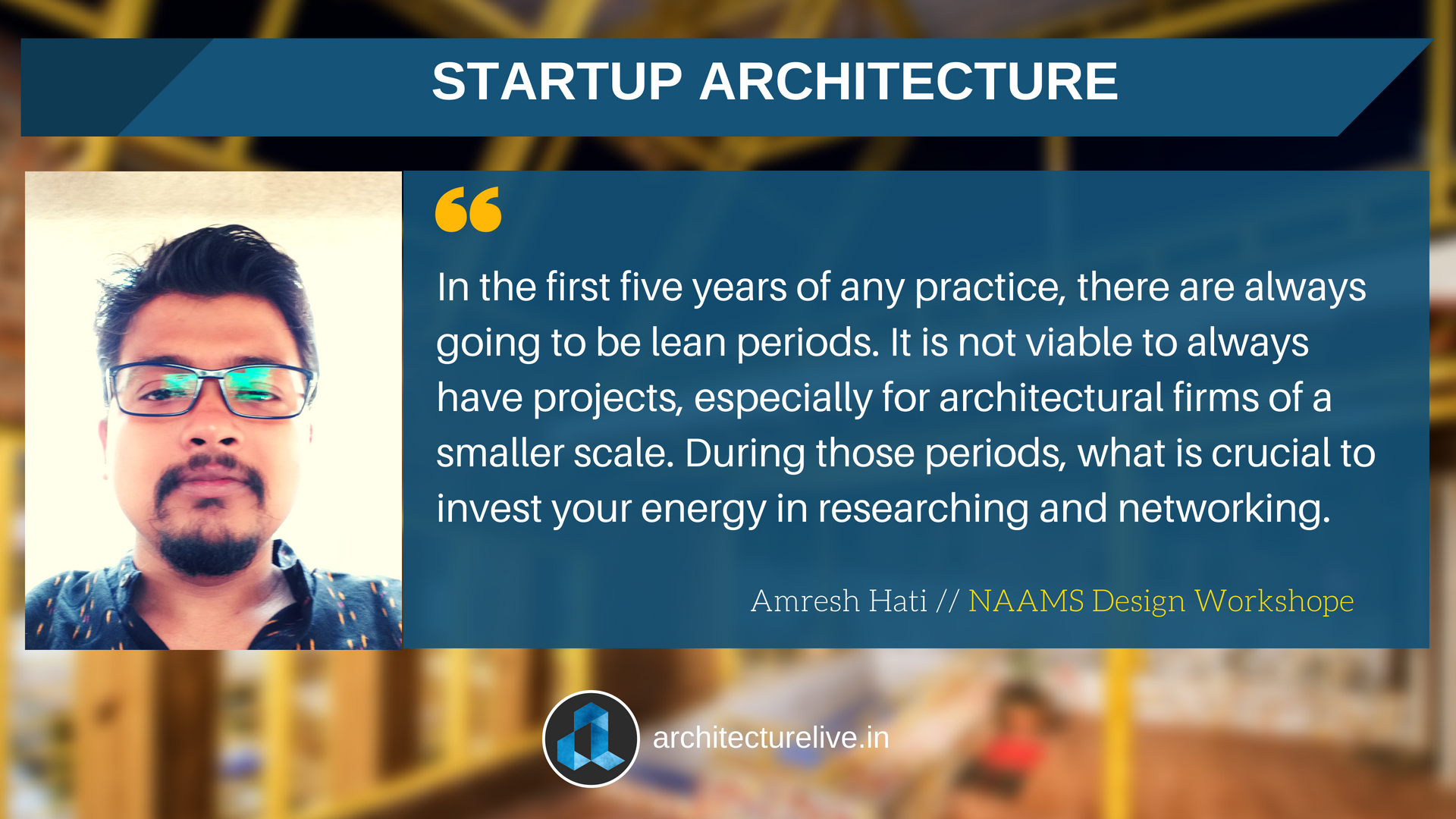 “If you wish to start your own enterprise, you need to have the right resolve for it.” – Amresh Hati, NAAMS Architectural Workshope

As this chapter closes to an end, we open a discourse with Amresh Hati who brings a new facet to light-  the importance of networking and collaborations with architects. Amresh Hati, Principle architect and co-founder of NAAMS Architectural Worshope Bangalore in 2011, which was envisioned as a design consortium.

We have broached the topic of Business Entrepreneurship through the course of the past few weeks.

As this chapter closes to an end, we open a discourse with Amresh Hati who brings a new facet to light-  the importance of networking and collaborations with architects. Amresh Hati, Principle architect and co-founder of NAAMS Architectural Worshope Bangalore in 2011, which was envisioned as a design consortium.

Amresh believes that the mantra for a successful design enterprise lies in the idea of connectivity. Good design evolves from communicating ideas. As a designer and an entrepreneur, relationship building should come naturally to you.  Although initially there are several trepidations in establishing a practice with the right attitude and appropriate strategies, developing client base becomes easy.

That being said, what remains indispensable is the quality of design. “For us, the biggest challenge initially was to find clients who believed in us” He continues,

“Your social network matters here, our first project was assigned by an acquaintance who believed in us. It was a bungalow in the outskirts of Bangalore. Although that kept us occupied in that period, it never evolved into other project commissions.” He continues, “In the first five years of any practice, there are always going to be lean periods. It is not viable to always have projects, especially for architectural firms of a smaller scale. During those periods, what is crucial to invest your energy in researching and networking.”

According to Amresh, Networking is very crucial and is often not given enough importance by practices.

[bs-quote quote=”“Architecture cannot function in isolation, it is a paradigm which demands art to arise out of necessity, as a response to the context in which it works.”” style=”default” align=”center” author_name=”Amresh Hati” author_job=”NAAMS Architectural Workshope” author_avatar=”https://architecture.live/wp-content/uploads/2018/06/20180418_111557-e1530374845178.jpg” author_link=”https://architecture.live/tag/amresh-hati”][/bs-quote]

He says “So, obviously, as an architect you cannot be confined in your own cavern, you have to reach out to people directly or through your designs for them to resonate with you.”

“The places where I have managed to meet clients is intriguing. As a young architect, I used to often travel by trains – through discussions and conversations I met several interesting people of different economical backgrounds who later came forward as clients. You can never predict when you will get a project. Architecture works in a state of continuum, irrespective of what you are doing, it always remains.”

In a similar stance, he extended the discussion about the importance of Social Media as a relevant tool of personal expression and as a platform to meet new people with similar interests.

“Facebook if used appropriately, helps you make the connections to take new steps in your career by networking with those that share your professional and personal interests. Through the medium I have found professionals to collaborate with and a few clients who after seeing our work connected with us.”

It is important to use all your resources in hand, be it in the form of your mentors, the knowledge you obtain from your previous employees as well as capital funding. “In the initial years there is little to no profit. As a first-generation architect I did not have enough funding or social network to sustain as well as flourish. Initially, we focused on smaller goals.” He continues, “Depending upon the scale of project, we often handled each project individually. This helped in occasions where multiple projects had to be directed at the same time. We used our resources effectively and would only collaborate for a larger project.”

“Sometimes we would even freelance architects and experts depending on the requirement of the project. This was an advantage of working as a consortium, there was no single boss. Such an organizational strategy allows greater creative freedom and scope for expansion.”

As the dialogue comes to an end, he succinctly concludes –

“If you wish to start your own enterprise, you need to have the right resolve for it. Understand what you envision as a practice, and what will be your client base. Develop your strengths. Build confidence with prospective clients. The right attitude towards your service, will serve you.”