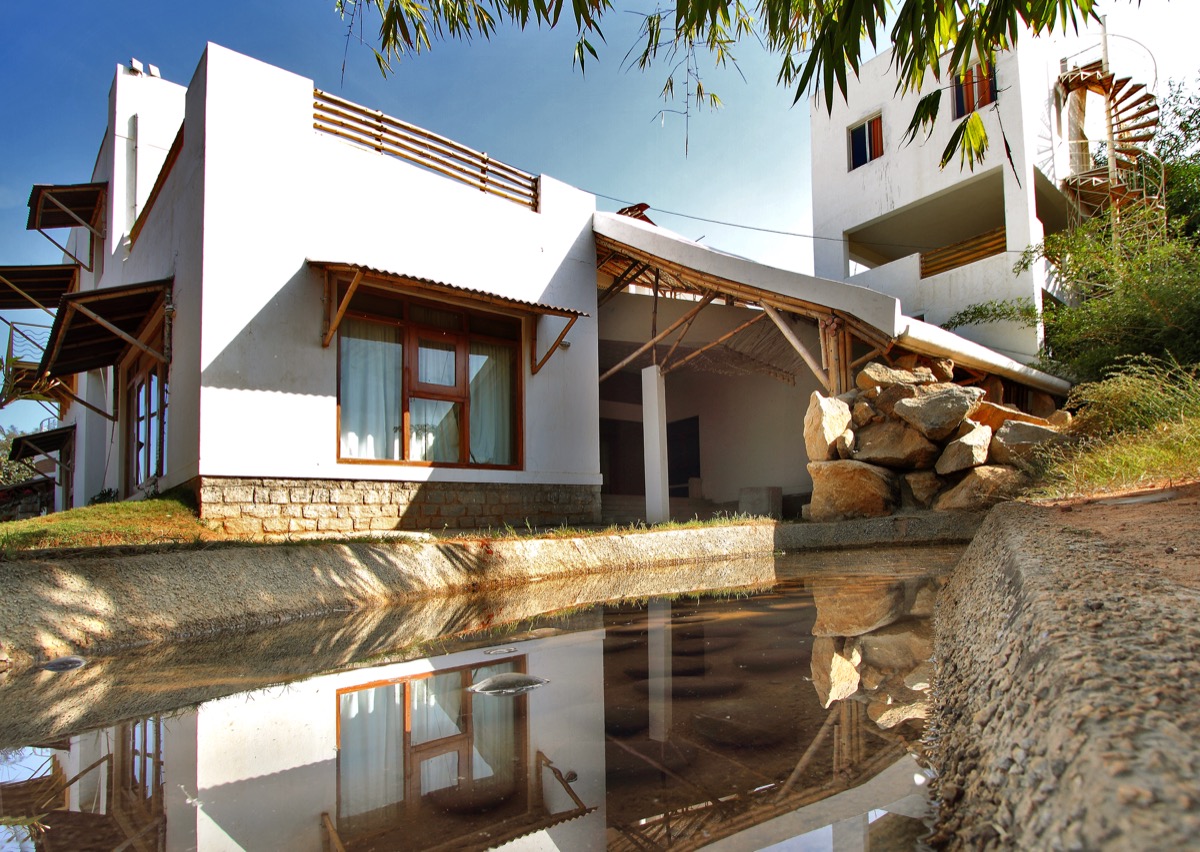 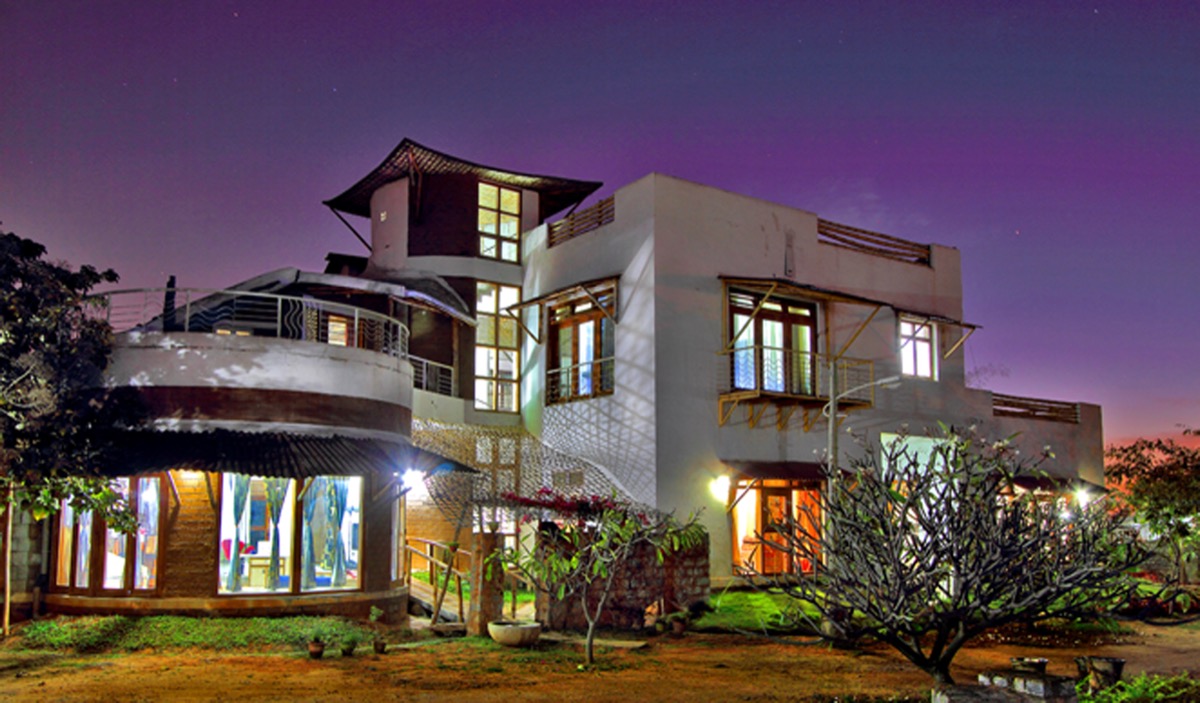 Bangalore, hailed the Silicon valley of India, is one of the fastest growing cities in the world. Thousands are migrating to Bangalore everyday, further loading the infrastructural services of the city which is already in a collapsed state. The Garden city of yesterday is experiencing a burst of infrastructure and building construction activity to cater to the ever increasing population. Flyovers, roads, underpasses, etc are being formed, creating tones of waste, cutting millions of trees, creating pollution all over Bangalore, disturbing the soil Strata, water table and so on, very unsustainable Exploitative Isolated Developments.

Aditi Greenscapes is a residential development proposing to grow their own water on the site, use all the waste as resource, produce electricity on the site. It is privately developed in the residential layout of 4.375 Acres. There are 5 lakes within 5km radius of this layout. They are encroached and polluted and need urgent rejuvenation. There is no water supply and sewage system in this area.

The house of five elements is located in this Aditi Greenscapes residential layout. 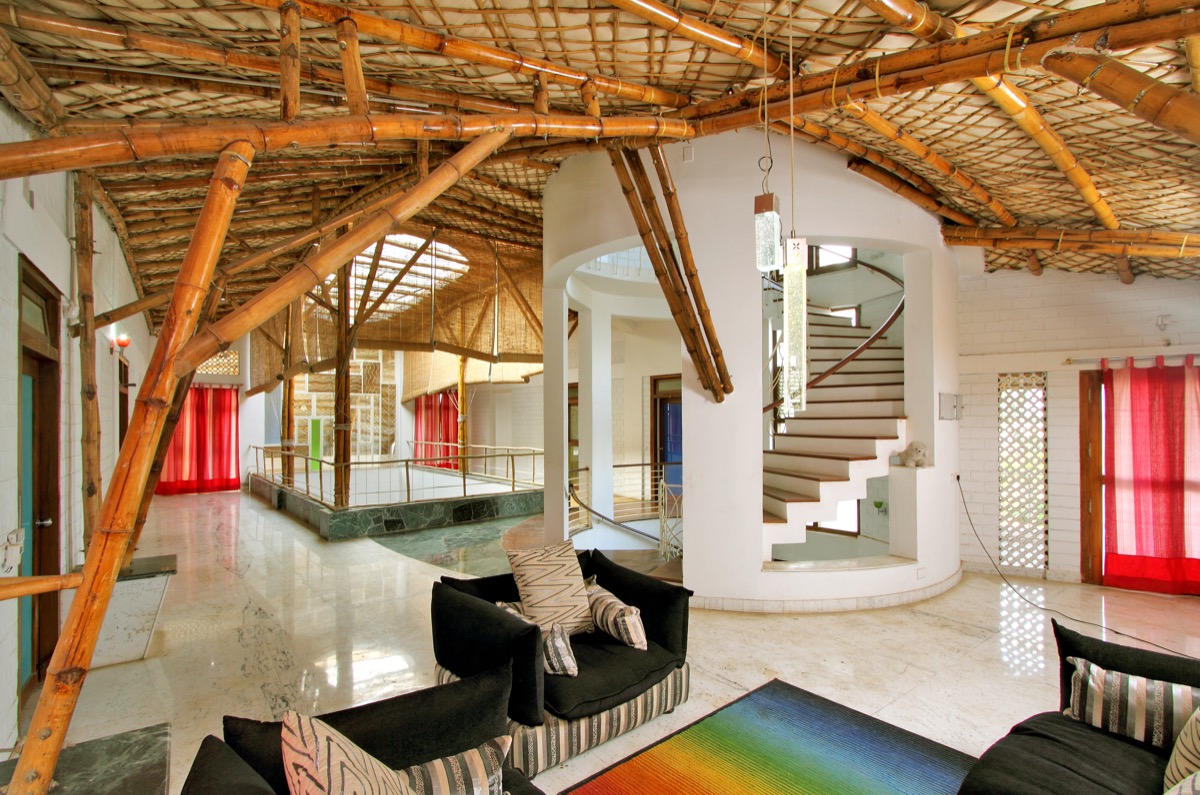 At any point in the house, one will be in touch with five elements of nature: water, air, earth, light, greenery. The house is spread along the east west direction, facing north. The spaces in this house flow and merge with each other, courtesy the open courtyard, open kitchen and dining with double height. There are five bedrooms and drawing room, around the courtyard, which helps in cross ventilation. It has three skylights – one above the courtyard, and the others above the kitchen and verandah towards east. The first floor consists of two bedrooms with terraces and balconies. The rendezvous doesn’t end here – the nature and interior spaces seamlessly merge into each other, coupled with Bangalore’s salubrious climate. The consequence is a house nestling in nature. 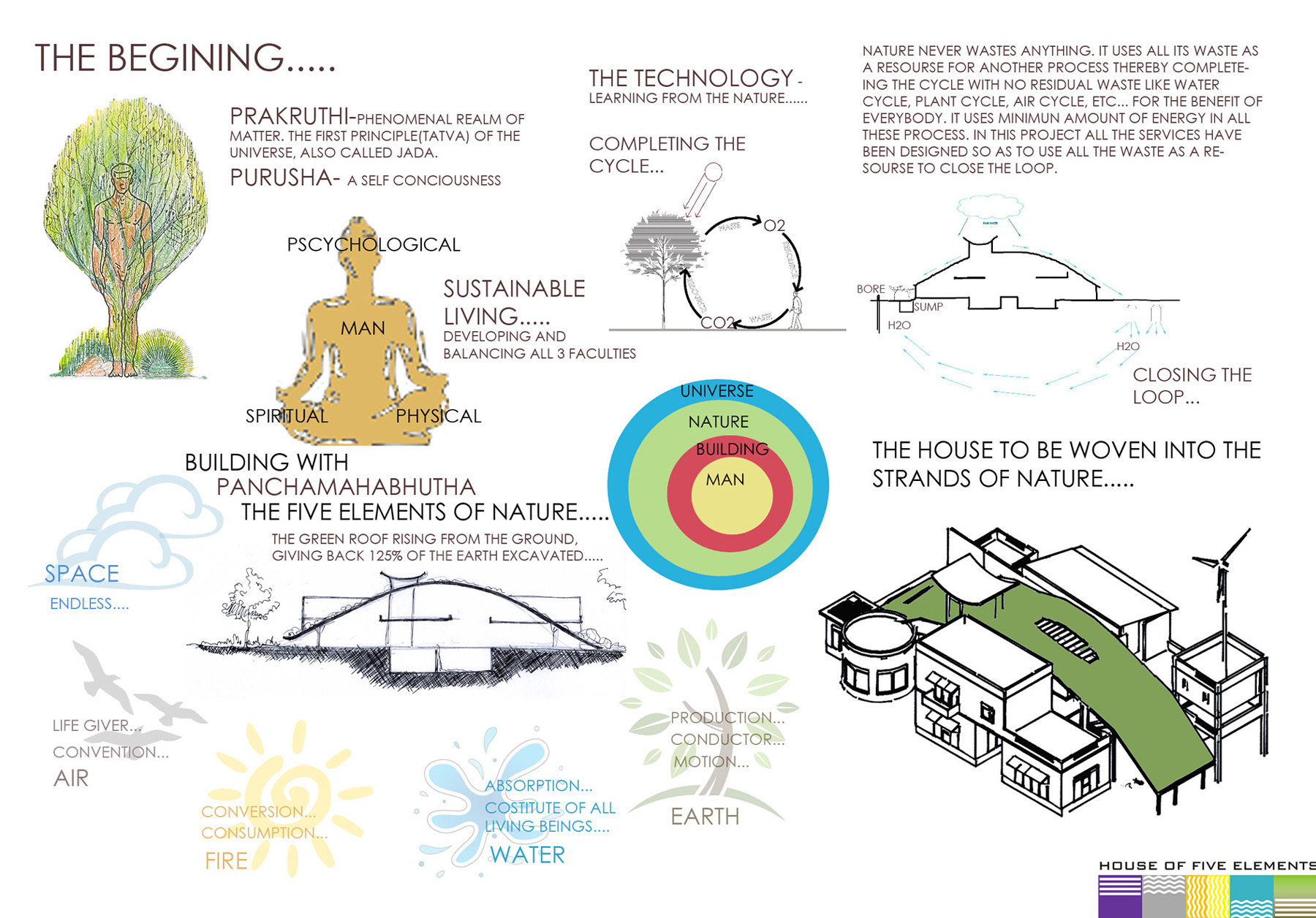 Measuring up to the target issues for sustainable construction

A prototype of Bamboocrete wall from prefabricated panels are made. It has been used as niche in the first floor. A green shell roof over bamboo lattice grid is done over bamboo supports. Thorough documentation of project workshops, courses, seminars for dissemination to propagate concept of Sustainable Communities. 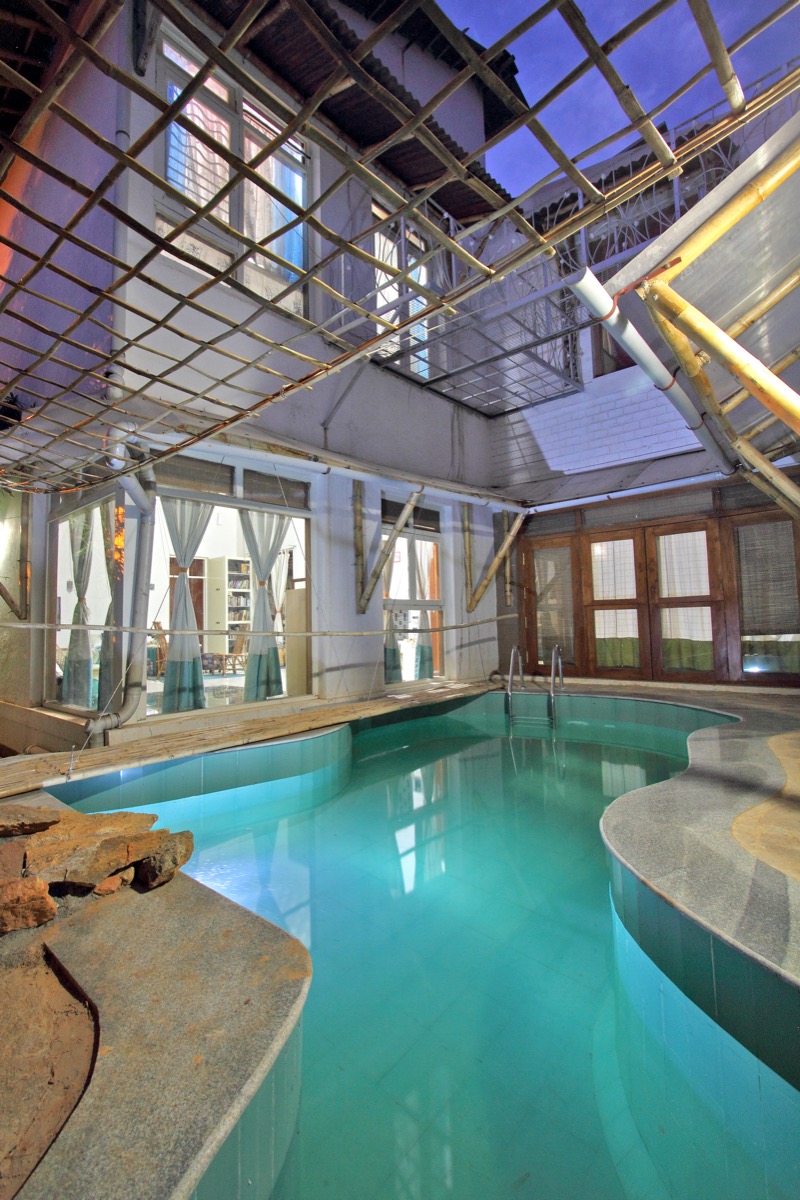 Use of Natural light, ventilation has been attained by given large windows with louvers and increased floor heights and skylights. Rainwater Harvesting sump of 75,000ltr has been put up and 500ltr of recycled water is being used by DEWAT system for gardening everyday. The electricity required for this house is been generated by solar wind hybrid technology.

Local simple construction methods are used. Low cost garden is proposed. There is use of fly ash for blocks and mortar, simple indigenous technologies to solve complex problems. Local, recyclable, natural materials with minimum processing like bamboo, stone, mud blocks, terracotta etc is used for the construction. Passive solar principles and wherever necessary active solar principles have been proposed. 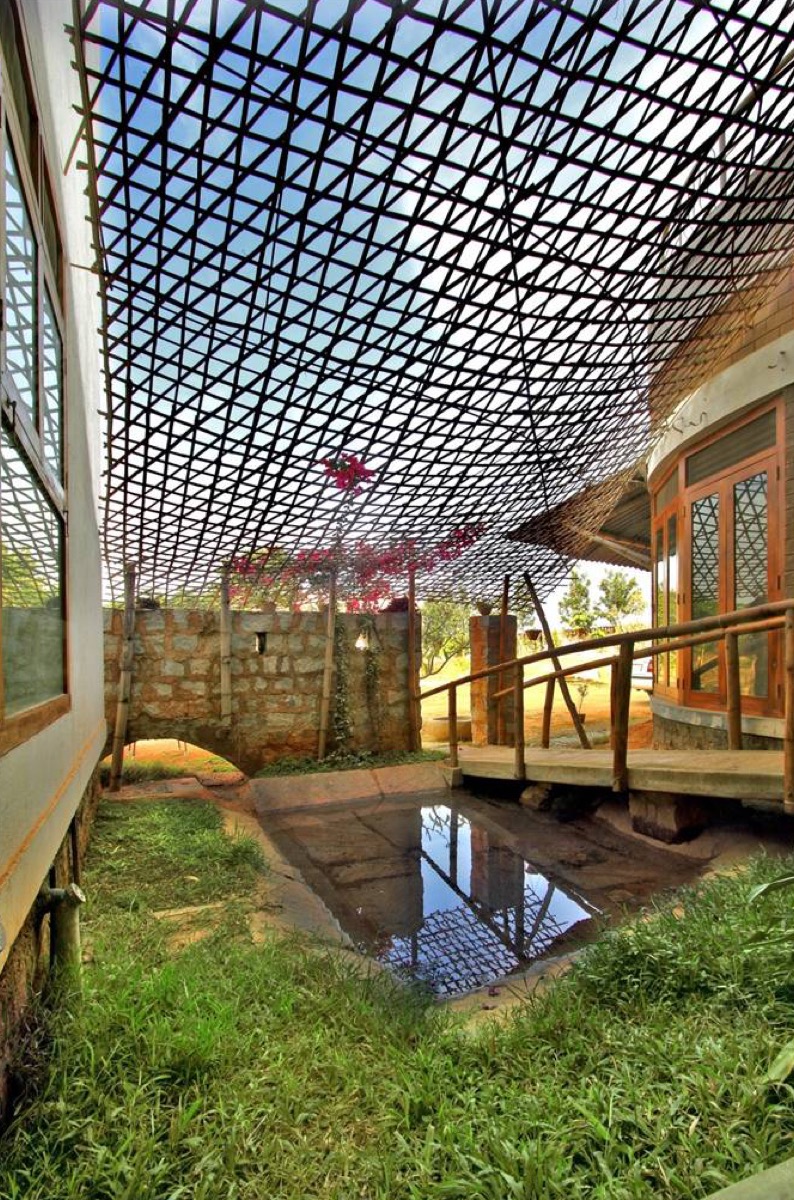 The house is designed on the principles of Sustainability and hence is designed with multiple green roofs to compensate its foot print by 125%.

Construction is done by unskilled workers, with labor training given during construction. All the load testing of bamboo roof and other design tests were done by us on site before the final execution. Excavated soil from site is used for production of Stabilised Mud Blocks. 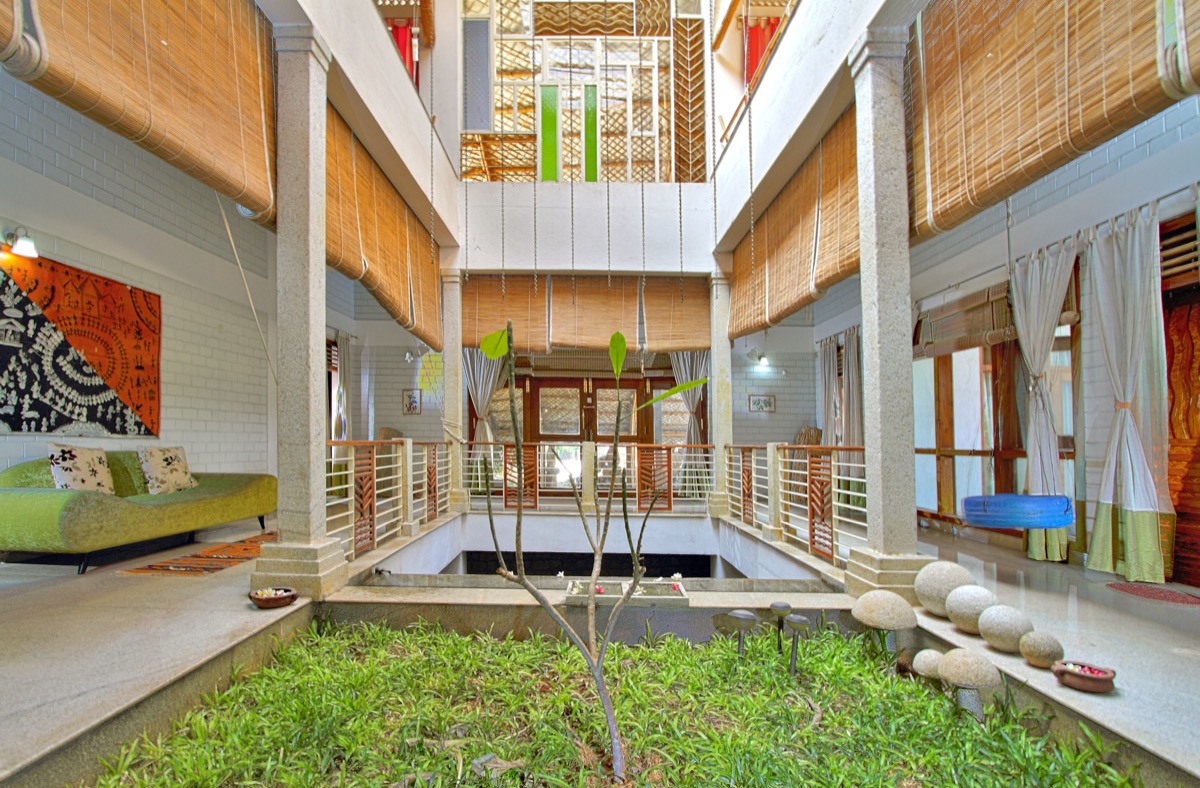 This house is an improvised example of traditional home “Thotti Mane”, where local traditional building elements, styles and technologies have been used to revive them and add context to the Architecture of the Residence. 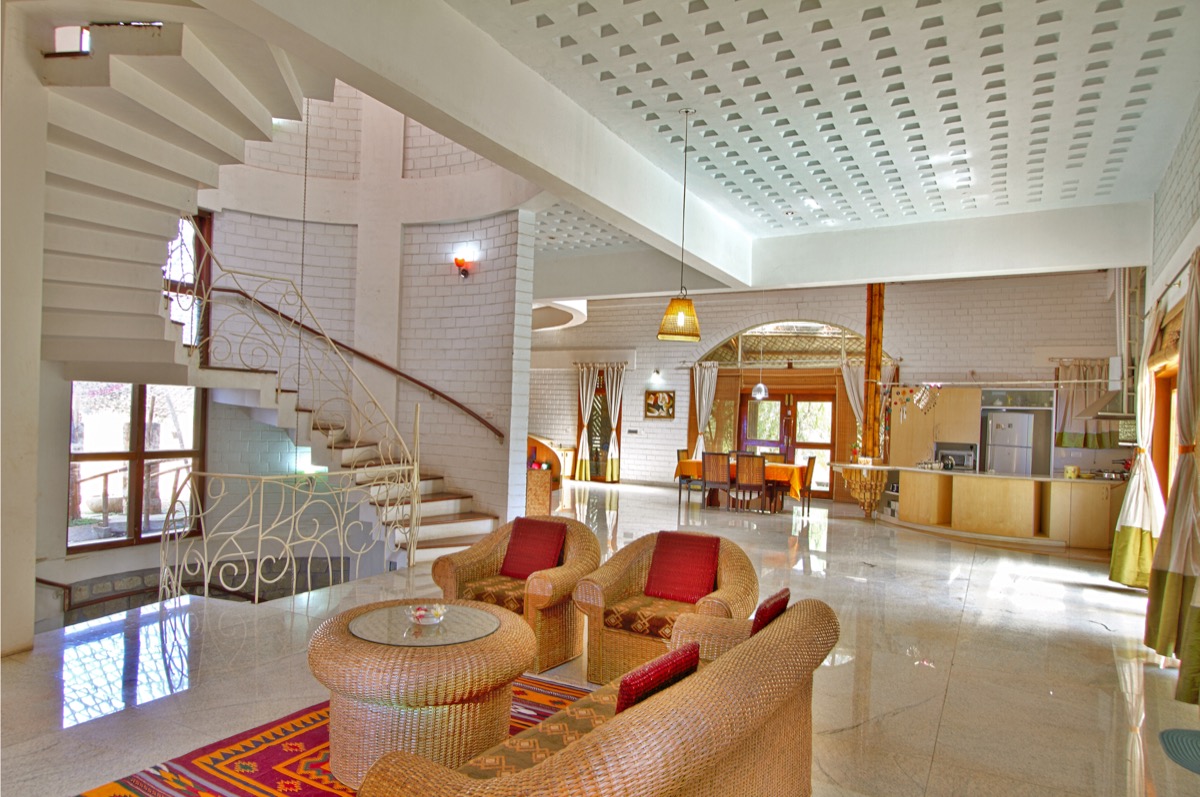 The project is being developed as an attractive, self sufficient residence respecting nature to meet the environmental standards and run on lowest energies, Zero Energy Development. This project will define a new Architectural style and language for this new Century and a new definition for the profession of Architecture in terms of Responsible Creativity and Creative Responsibility. The project would heal the overall degraded locality, change the microclimate by use of waste, replanting, lake rejuvenation, biodiversity and other campaigns involving locals and school children.

More drawings below (Click on each image to enlarge): 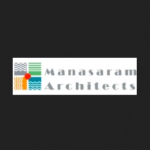