This building, completed in 2013, is among the first few additions in the rapidly expanding BS Abdul Rahman University Campus initially established in 1984 and spread across 61 acres at Vandalur, in Chennai. With its growing needs compelling a vertical re-imagination of the existing framework of the Campus, retaining its strong pedestrian relationship when moving from the ground-up, by creating spaces of interest and activity in between, was critical to the approach to planning, right from the beginning.

Every building on campus with its clear set of underlying goals and governing principles, contributes to the vision for the campus, in an incremental way: seeking to diffuse the strong thresholds and forge an active relationship between the buildings, spaces and streets, over a period of time. While creating major public zones, the buildings subtly transform their ground planes to anchor campus activities, thereby establishing links with the streets that feed them- creating nodes, re-defining vital axes and emphasizing points of focus. The architecture strives to allow this character to flow vertically into the buildings for spaces of engagement to thrive. The Department of Life Sciences, at the campus level, was planned to be an extension of the four existing buildings it neighbours and lead into the outdoor canteen abutting it. It plugs into the corner site as a tall tower, in contrast to the low-lying blocks adjacent, to create a bold anchor point at the end of the axis.

The previously unused rooftops of the neighbouring blocks are activated through this building, by zoning public spaces at that level, spatially linking them through program, and physically through a bridge that continues as a green roof, inviting informal public activity.

At the ground plane, the space around is articulated to serve both as an entryway as well as an extension of activity, which stretches across the courtyards in the middle as a thoroughfare for movement. This spatial acknowledgement of movement and interaction, both synonymous with campus life, at the ground plane as well as an elevated level, is what defined the course for form development of the building. Given the constraints of the site, and the intentions for the space, the building was envisioned as a pure extrusion of a rectangle, with the spaces free to express themselves on the form. The structural system is true to its visual appearance: an internal ‘grey’ volume held together by the structural grid, wrapped by a cantilevering envelope that forms the façade. Located along a street, the perforations on this façade coupled with the exposed circulation paths that boldly swathe it, help break the massive volume down to a more human scale.

The random play of the strip-like windows allows the built envelope to continue to be perceived as an opaque mass, while permitting sufficient light and ventilation to the spaces within. A blank wall looks onto the street imparting a sculptural quality to the building, and a strong edge to the street axis, while also being a compelling visual anchor.

All in all, the form of the building is a culmination of both: the decisions at building level, based on the opportunities and constraints available, and the major vision for the campus: with each decision at building level representing the parts that reinforce the whole. 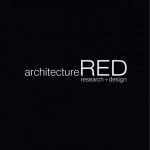