Works and Profile of Brinda Somaya – Somaya And Kalappa Consultants

Brinda Somaya, Architect and Conservationist completed her Master of Arts degree from Smith College, USA after graduating from the Sir J. J. College of Architecture, Mumbai. She believes that development and progress must proceed without straining the cultural and historic environment. Her philosophy: the Architect’s role is that of guardian – his is the conscience of the built and un-built environment.

This belief underlines her work at “Somaya and Kalappa Consultants”, the company she has headed for the last three decades. Her oeuvre, spanning large corporate, industrial and institutional campuses extends to public spaces, which she has rebuilt and sometimes reinvented as pavements, parks and plazas as well as historic restoration and adaptive reuse.

Brinda is a Member of the Editorial Board for MARG Architectural Books, Member of the Committee of `Environmental Impact Assessment of New Construction Projects & New Industrial Estates for `Ministry of Environment & Forests’ Government of India and was a Member of Urban Heritage Conservation Committee and Mumbai’s Initiative for the Protection & Improvement of Streets & Public Spaces..

She was also on the IAWA board of Advisors (International Archive of Women in Architecture), U.S.A. & Founder Trustee of the Hecar Foundation. She chaired a conference & organized a seminal exhibition in Mumbai on the Work of Women Architects with a focus on South Asia.

Brinda has delivered analytical and critical talks as well as presented papers in India and abroad on her work – and other connected subjects. She has given lectures in the U.S.A, U.K., Australia, Pakistan, Sri Lanka & India and her work has been exhibited in the USA, UK & Japan.  She has served as an Examiner & Jury Member in India & Abroad.

The Neo Gothic Bombay building was designed by Sir George Gilbert Scott, an English architect of Victorian age who also designed the Convocation Hall. The foundation stone was laid on 1st March 1869. It took 9 years (November 1878) to complete. 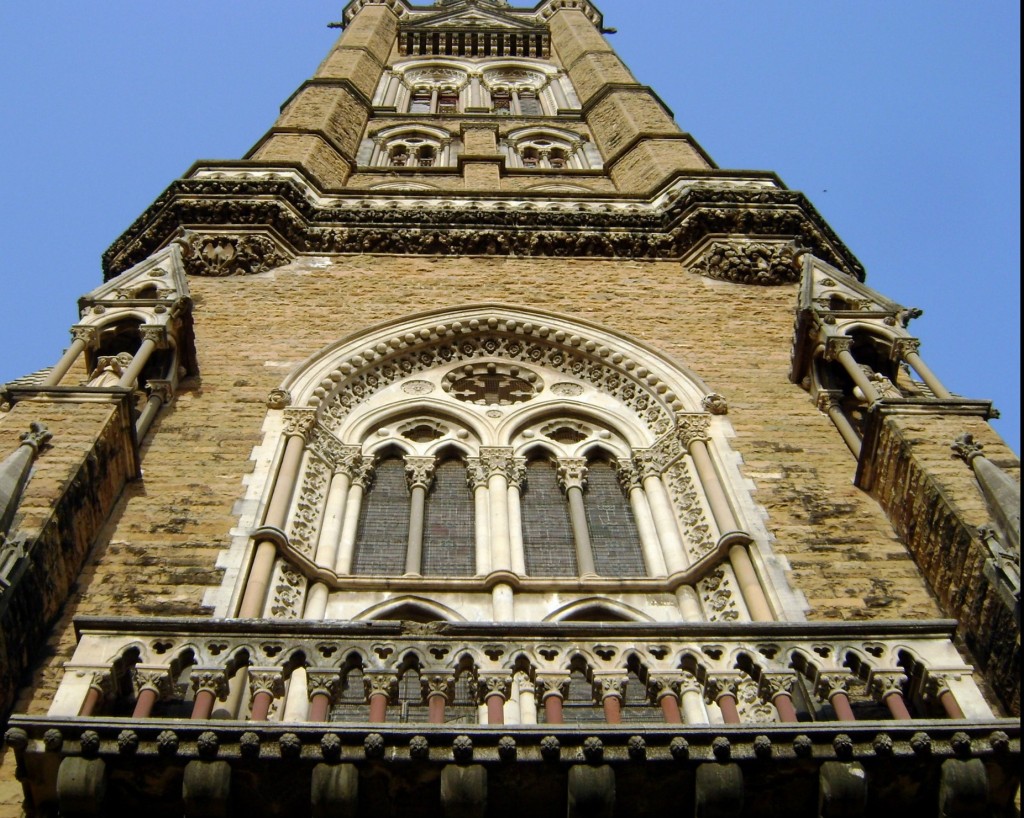 Read more about this project HERE. 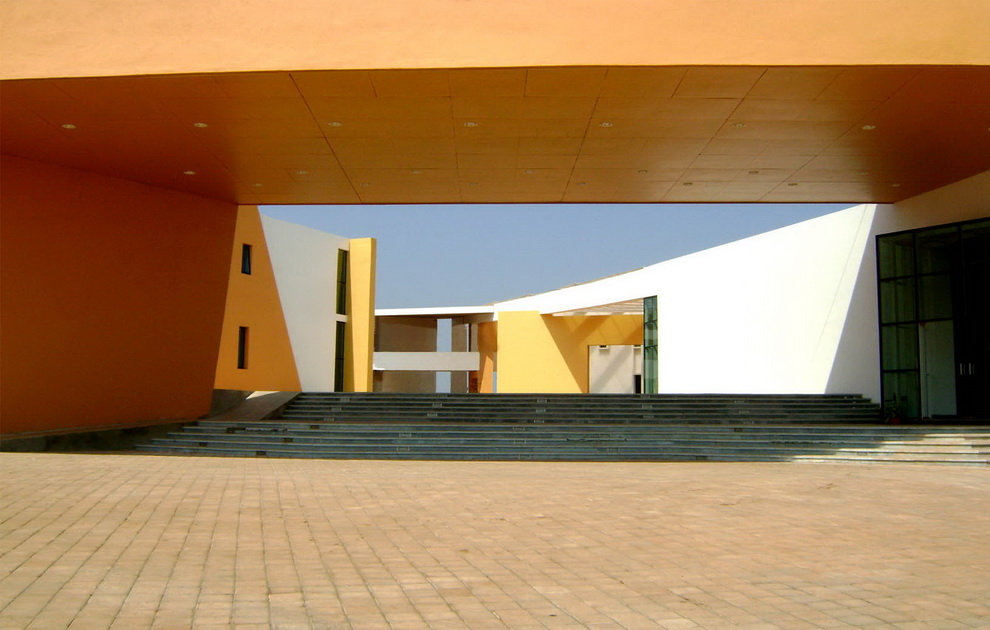 Spread on 50 acres of land, the environment of Goa Institute  of Management is a closed-campus institutional  facility. The site opens up to panoramic vistas of the Western Ghats and has many levels – gradual  and sudden. The program for the  institutional   facility  with  the  residences for students and faculty  is fragmented  in  4 sets of  buildings.  Spread over the  site  and  connected  by many  pathways,  these  sets are organised  along  two  perpendicular  axes. The academic  and  the  administration   areas are clustered  in  the  centre  of the site at the intersection  of the axes while  the library  and canteen blocks are located  on the  highest  point  of the  site. The student  hostels are placed at the  northern-most   corner and the  lowest  point  of  the  site is occupied by recreational facilities  for the students. The campus is environmentally planned to harvest rainwater  from recharge pits and swales while  the Laterite extracted from the site is used in construction. 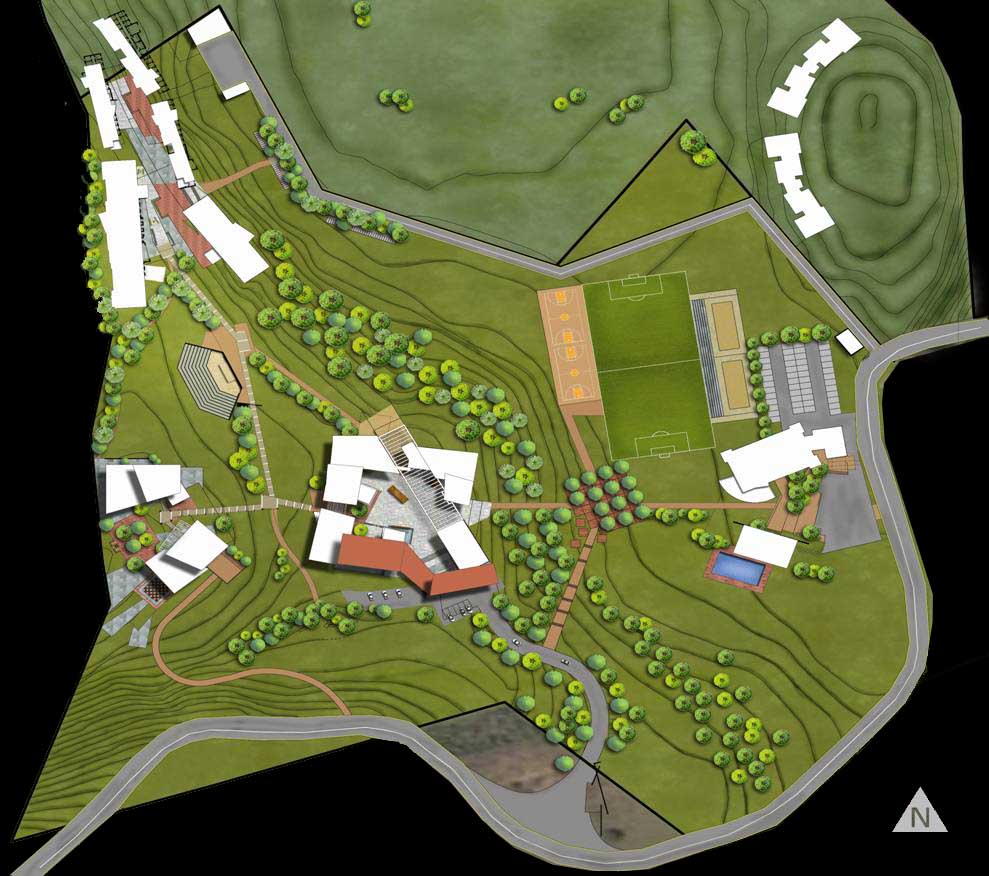 The clusters of built  forms on the site respond to the organisation  in the master plan and the lay of the land. The zoning  follows  the contours of the site and the clusters of built  spaces form  a cohesive environment  on the site. Resisting being ‘buildings’,  the architecture  of the campus assumes the form of built  and environmental interventions on a continuous natural landscape. Built forms are concentrated at nodes where there is concentration of activity. The clusters are composed in dynamic  intersections  of spaces, volumes, surfaces and colours. Planes that  assume many  forms  and alignments  bind the sets of enclosures into logical wholes. Differences of levels and changes in textures distinguish spaces while  vertical  planes with  voids define  them. The fenestrations  and punctures in the walls frame vistas. 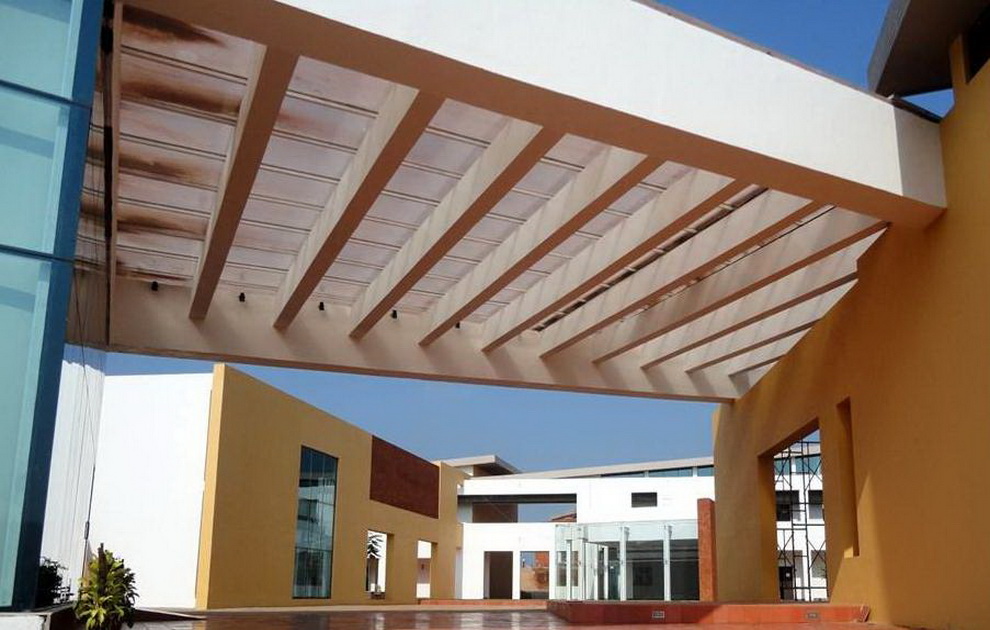 Rectilinear forms  and spaces intersect to define the plaza and the enclosures of  the  central  administration   and  academic block.  Surfaces with   varied permeability of vision and access enclose  functional  areas within.  Textures in floor  patterns and flooring  materials change in accordance with  alignment, composition  and  relationship  between  built  and  open.  Complex formal organisations dissolve into  simple organisational  patterns. Walls intersect and overlap to create interesting spaces. 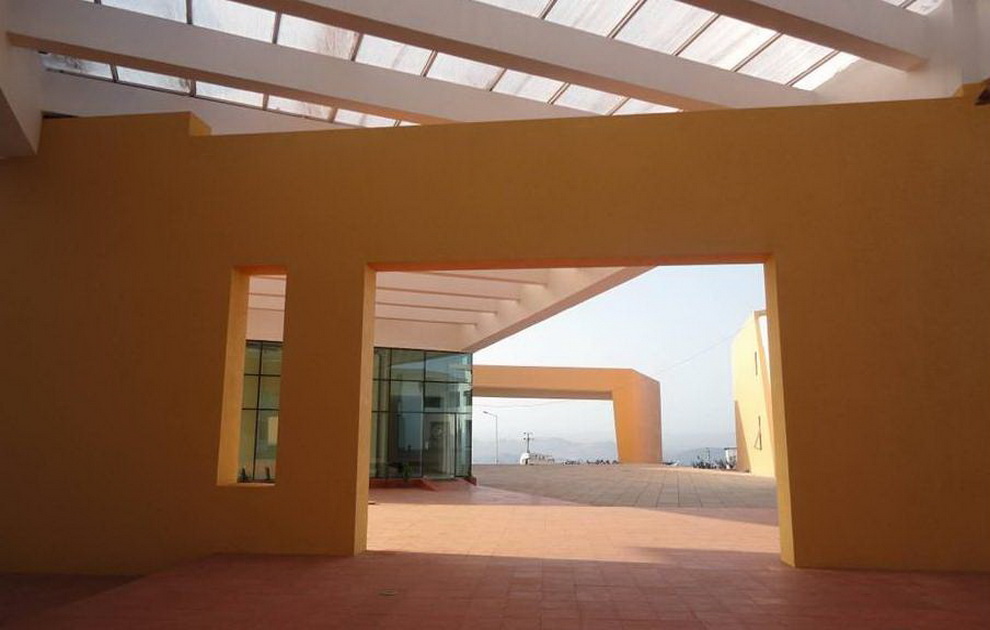 The centrally  placed  academic  block  is organised  around  a large,  paved plaza – the  first  place of access of the  formal  campus.  Spaces organised  around  the plaza respond internally  to the open space and externally to the panoramas of the  Ghats. Depending  on the  privacy  and purpose of the internal spaces, the materials of the enclosures change in transparency, lightness and permeability. A glass wall  overlooks the axis with  pergolas while  thin  vertical  apertures in the enveloping walls restrict excess light and visibility in more internal spaces. The quality, proportion and material of fenestration vary throughout the built form in reference to the immediate and distant context. Repetition ensures harmony. 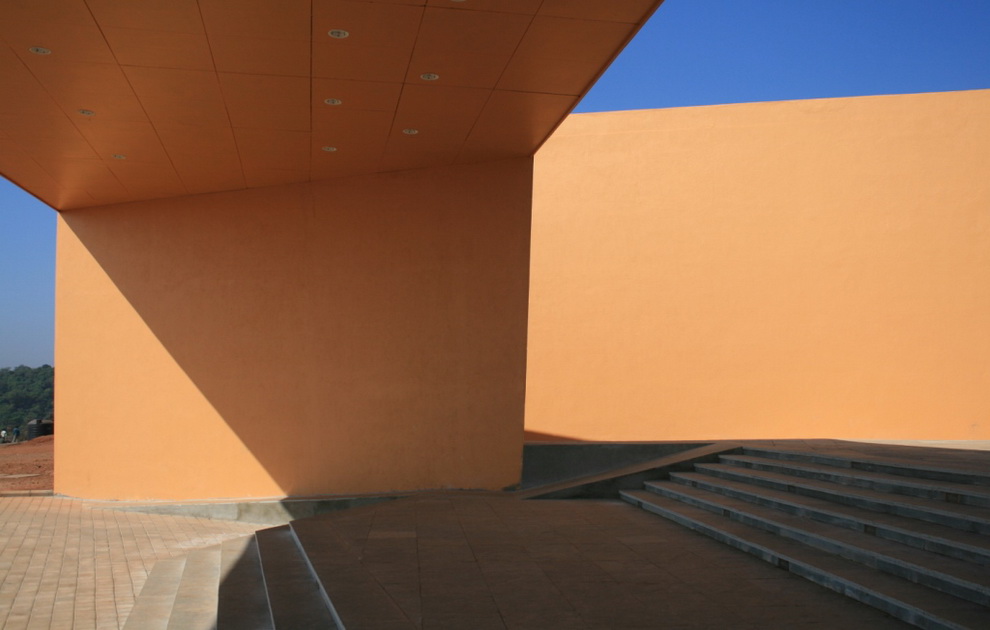 The set of the  spaces for  cafeteria  and  librar y are planned  at a vantage point – the  highest  on the  site and have an advantage of un-restric ted views  of the site and the landscape.  Designed  as enclosures  with  a multi-level open space in the centre, the orientation  and rectilinear  plans of the spaces spill  over in the semi-open  and open spaces of the plaza.

On the northern  end of the site, the residences for the students are designed as linear strips on either  side of an arcade-like  space. Regular and uniform in plan, the built  masses have rhythmic  fenestrations  and open on either  side. The multi-level arcade in the centre forms many informal and intimate  spaces for small and accidental gatherings.

In the general scheme of things, a set of defined architectural  elements is employed in a variety of permutations  and combinations  rendering each space unique  and responsive to its situation.  Colours, textures, night-lights, vegetation and a palette of related materials regulate and orchestrate experiences within  and outside. The campus is thought  as a landscape with architectural elements and gestures. 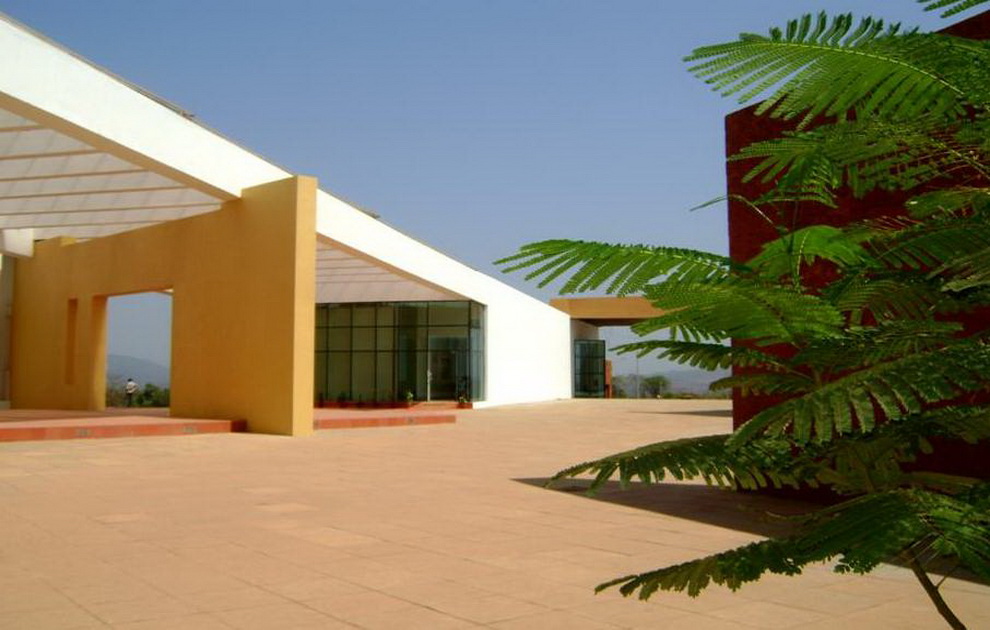 Quaint and  silent  as their  surroundings  are, the  built  environments   of  the Author’s residence and  Goa Institute of Management  intervenes sensitively and establishes strong relationships with  the immediate  and distant surroundings.  As buildings  located  within   rich  vegetation   and  fertile  land, the landscape – both natural  and planned – envelopes and  is allowed  to intrude in the environment. Colours, textures of surfaces and a set of solids and  voids  define  spaces. The experience of  architecture  changes  with   time as natural  and designed light  changes around  the enclosures. One powerful idea central to both the projects; and perhaps central to most of Somaya & Kalappa’s work  – is the understanding  and interpretation  of architecture as a choreographed environment rather than a design object. 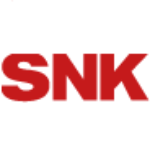