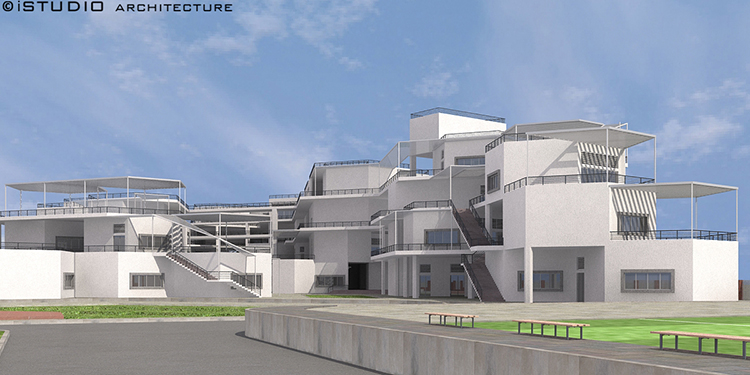 The Mount Litera Zee School, at Bhatinda by iStudio Architecture

The Mount Litera Zee School, at Bhatinda by iStudio Architecture: The built environment of a school has the most subtle yet probably the strongest psychological effect on a child. This principle of pedagogy, based on the concept of built space influencing the space user, can be used as an effective tool to create the environment the school desires to inculcate around a child.

A child’s mind is an open book to write new impressions, thoughts and ideas without the presence of preconceived notions and beliefs. What it observes, grasps and understands forms the very basis of an individual’s mindset, which becomes a part of society. Thus a child’s school, teachers and playmates play a very important role in its life, forming lifelong impressions in its mind and directly impacting the future of the society. Any school therefore needs to be very carefully planned in terms of its academics, facilities, premises to ensure that absolute care is taken over a child’s mental, emotional and physical health.

The built environment of a school has the most subtle yet probably the strongest psychological effect on a child. This principle of pedagogy, based on the concept of built space influencing the space user, can be used as an effective tool to create the environment the school desires to inculcate around a child.The Mount Litera Zee school, Bathinda is one such school, where the design of the school buildings is a product of a complete understanding of the school philosophy and motives towards the child and is intended to influence the child’s perspectives and thoughts from its initial steps into the school.

The Mount Litera Zee school, a 1.2 lakh sq.ft. day school facility is located in a 4.5 acre plot in Kotshamir area near Bathinda in Punjab, India. A 3.5 acre sports facility has been planned in the immediate vicinity to support an all-round development of the child. The school structure has been planned into 4 sections- preprimary, primary , secondary & higher secondary with an administrative section, multi-purpose hall, amphitheater and football field. The entire built mass has been placed away from the road with the football field in the forefront, to cut off the building from the highway noise and ensure privacy and safety for the children. The children are dropped off near the amphitheater located near the internal road which cuts the site into two. They enter into the central courtyard and move into their respective sections. Once the student enters the premises of the structure, there is no vehicular movement within.

The administrative block with the reception, staff, principal and chairman’s office is located in the middle of the structure so as assert a covert authority and accessibility of the staff to the students. Visitors can access the multipurpose hall without intruding upon classrooms and common student areas. The service road planned along the southern end of the site connect the school premises to the road along the sports facility site. The school is located on the national highway between Mansa and Bathinda. The entrance is highlighted with a large scale sculture of the Mount Litera Zee logo. The steel and acrylic compass has been grounded to give a sense of having risen from the ground. The entrance canopy continues as behind the solid brick wall, emerging from the earth. There is a sense of motion along the entire composition of exposed brick work, glass walls, truss-work and lightweight polycarbonate roofing sheets. The presence of the logo at the entry creates a sense of pride and belonging in the student’s mind and the dramatic entrance captures any visitor or passerby’s attention and interest. Situated in a region subject to extreme summers and winter, climatology had to inevitably play a huge part in the design of the school. The massing of the entire structure has been planned in response to local solar path and wind directions.

The structure moves from a single storey to a four-storey building, with maximum height in the southern direction. Thus the building casts a shadow towards the central court, keeping it shaded and cool. The court opens towards the western winds. These winds circulate through the building due to the negative pressure effect created by effectively placed smaller openings within the structure in the eastern direction. The western front of the buildings are flanked by shaded water bodies which cool the hot western winds and pass cooled air through the structures. The court and the buildings are interspersed with vegetation, creating a sense of continuity of landscape throughout the structure.

The school has been designed to encourage interaction between students throughout the duration of their schoolday. Nodes and spillout zones have been designed to create hierarchies of interaction between classmates, batchmates and seniors and juniors at various points of circulation. The passages and staircases bifurcate into small gathering or seating areas. Classrooms of each sections are placed together and open out into waiting spaces which allows conversation between students. The students can claim ownership to nooks and corners, creating a sense of belonging to the place. Nooks and crannies have also been provided to encourage exhibitions and displays of thoughts and works at a local level of classrooms. The students get a chance to learn from daily observations and an inevitable participation within the space as much as within the classrooms. 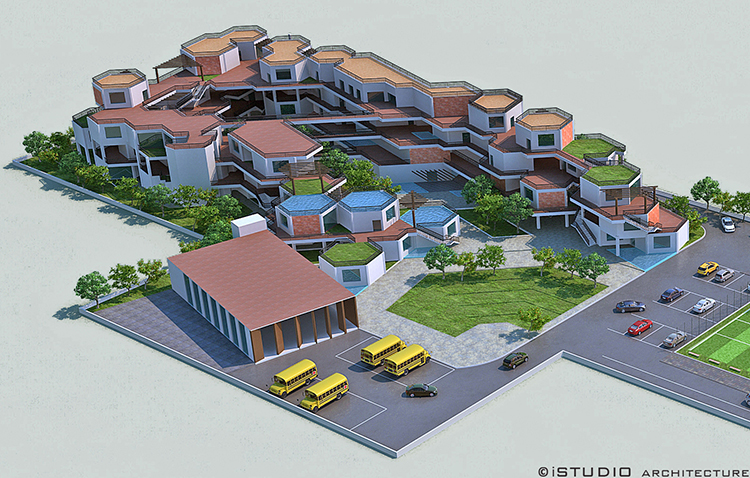 The classrooms have been planned as self-sustained learning centers, which allow for flexible configurations of individuals, partners, groups and students-teacher interactions. Each hexagonal room opens out into a triangular garden, blurring the boundaries between the built and open space. The hexagonal classrooms seem larger than their square counterpart, and allows for more flexibility. One wall acts as a teaching area with its interactive white board (IWB) and green board, while one acts as a display area for student work. One acts a research area with library unit with books, models and computers while the entrance wall acts as a storage unit.

The remaining walls allow for light and ventilation into the classroom, making the use of air-conditioning redundant. The colours of the furniture- blue, green and white have been derived from the Mount Litera Zee logo. They have been kept bright and fresh to introduce a ebullient atmosphere in the room. The physical space has been designed keeping in mind the curiosity in a child’s mind. They learn to observe and interact more with each other. Each child has a sense of exploration and discovery in them and this school has been designed to keep this spirit of adventure alive in them. 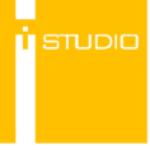