The fourth exhibition in the series The Architect‘s Studio presents the Indian architect Anupama Kundoo. The exhibitions gives us insight into the architect’s working process. How does the form of a building arise, and what is the thinking behind the choice of materials and construction technique?

The fourth exhibition in the series The Architect‘s Studio presents the Indian architect Anupama Kundoo. The exhibitions give us insight into the architect’s working process. How does the form of a building arise, and what is the thinking behind the choice of materials and construction technique?

Kundoo’s architecture builds on a profound understanding of craftsmanship and material – an understanding she gains by participating in the construction of her buildings. Her works are always a product of research in tectonics, sustainability and materiality, and at the same time they are a resource for the teaching of coming generations of architects.

Under the title Taking Time Kundoo shows us how architecture is always a product of the time spent on the process: time to reflect, time to teach and research or time to produce handmade bricks. Time must not be saved, but spent. Kundoo’s method makes an important contribution to discussions of circular economy and the reduction of CO2, and with her practice she takes the concept of ‘site-determined architecture’ to new levels.

The exhibition consists of three chapters: The Architecture of Time presents Kundoo’s sources of inspiration and research in materials, which form the building blocks of her architecture. Full Fill Homes is a full-scale model of modular construction, which is Kundoo’s response to global housing shortage. Co-Creativity is about Kundoo’s interdisciplinary method and her latest major project, Line of Goodwill – a master plan for urban and housing development in Auroville, India.

Co-creation – architecture is co-operation – is a cornerstone of Anupama Kundoo’s work. Buildings need to be timeless, as they will outlive their architects and still be of value in the future. Kundoo has learned from architects of older generations and she is taking further some of their visionary ideas that are still relevant today. In the same spirit she includes the younger generations, passing on her knowledge whilst at the same time learning from them. Her architectural laboratory therefore stands on three “legs”: her own practice, research and teaching. To promote exchange of knowledge she spent time with craftsmen and makers of architecture, inter-disciplinary collaborators as well as students which has influenced her own thinking.

Her most recent “co-creation” project is a work-in-progress, Line of Goodwill, Auroville’s first high-density co-housing settlement. It is a collection of proposals for urban collective living produced through the studios she taught at different schools of architecture around the globe. A model in 1:50 of Line of Goodwill including building projects made by the three architectural universities is displayed in this gallery.

The facade structure in 1:1 shows Kundoo’s research into rethinking intelligent facades of the future that consider human scale and intimacy, while also regulating climatic comfort in innovative ways.

It shows the three broad areas of innovation: integration of the latest generation of energy generating materials, absorption of urban waste such as denim waste from export industries, and urban farming strategies that are the fed by circular and integral water and wastewater management and onsite created compost.

Auroville Timeline
Auroville is an experimental city founded on 28 February 1968 and situated 10 km north of Pondicherry in the South of India. 5,000 people from 125 countries and all the Indian states participated in the ceremony. Mirra Alfassa, also known as The Mother, envisaged the new city, named after her spiritual partner, Sri Aurobindo, dedicated to achieving human unity and international understanding. French architect Roger Anger, one of the most prolific architects in Paris, was appointed Chief Architect of Auroville.

An Urban Hillscape of Coexistence

50 years after Auroville’s foundation, Anupama Kundoo was appointed by a diverse group of residents for the urban design of the longest of the urban macrostructures in Auroville’s city plan, named Line of Goodwill. The first high-density development is intended to help Auroville take steps in the direction of the compact pedestrian city. Line of Goodwill begins at the entrance to the city, as a gateway for visitors, with an 18-storey volume that gradually descends towards the city centre. The cluster of buildings stretches over 800 metres and accommodates 8,000 inhabitants.

In all her projects Kundoo works with the following three integrated ”legs”: her own architectural practice, research and teaching. This means that all her projects form part of a research which – through teaching – aims at passing on knowledge to future architects whilst at the same time learning from a younger generation who will be making use of the architecture longer than Kundoo herself. The Line of Goodwill is research into future ways of life and sustainable cities. The project has been realized in collaboration with Fachhochschule Potsdam, The Royal Danish Academy of Fine Arts, Schools of Architecture, Design and Conservation, and Yale University School of Architecture. Furthermore, the project has been supported by specialist studies made by water engineer Harald Kraft and climate engineers Transsolar. Students from the universities have contributed with models to the large 1:50 model in the exhibition. The work of the Yale students are presented on the screens.

Kundoo began her practice soon after moving to Auroville in 1990. She built her first home, Hut Petite Ferme, and several other residential and public buildings there. By 1996 she began co-operating with chief architect Roger Anger on Auroville’s urban design and planning. While her practice grew, she continued to work closely with him on the city until he passed away in 2008. During this time, she produced proposals for the Administrative Zone, the Habitat Area and Auroville’s City Centre under his direction and initiated studies on the Lines of Strength 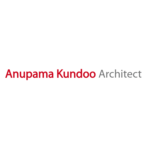