The home is located in the outskirt of Bangalore at the edge of the garden around the park adjoining a lake. Since the plot is a corner one the home is designed so that it can be viewed from both the sides. As one walks around the building it reveals its characters, punctured wall with windows of various size and hues, telescopic vaults and sloping roofs at jaunty angles. - Biome Environemntal Solutions

The home is located in the outskirt of Bangalore at the edge of the garden around the park adjoining a lake.

Since the plot is a corner one the home is designed so that it can be viewed from both the sides. As one walks around the building it reveals its characters, punctured wall with windows of various size and hues, telescopic vaults and sloping roofs at jaunty angles.

The brief required the home to have two living spaces – a small self-sufficient guest wing and the home for the family. The guest wing has a large bedroom with accessible toilet, a living room and a kitchenette there by making it age friendly. The family wing has three bedrooms, living, dining and kitchen .Binding the two wings together is a large internal courtyard with a palm tree which has been retained. 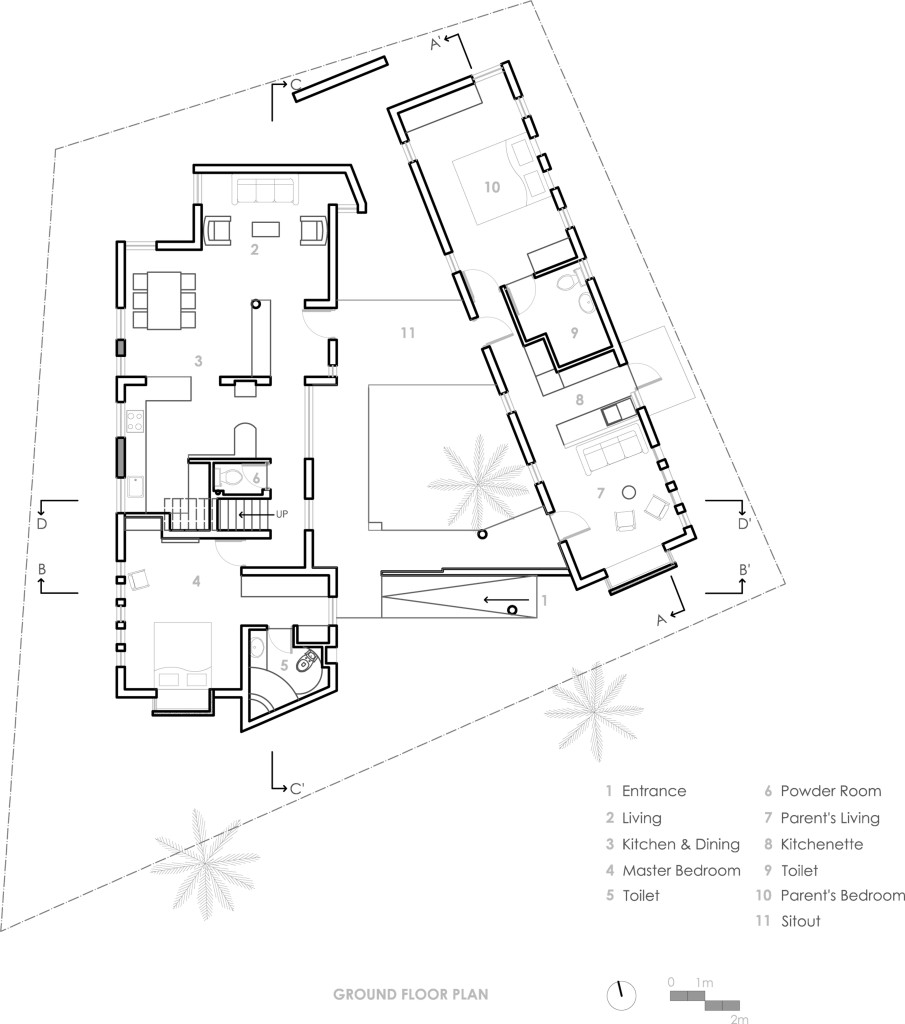 This verandah has a swing and large enough space to accommodate other free chairs. The verandah is placed above the underground rainwater tank. 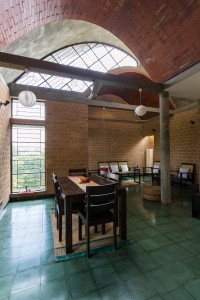 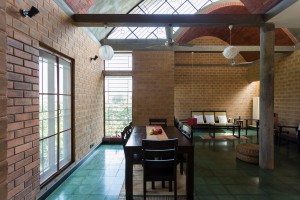 In the main unit, the living dining area is roofed by three telescopic vaults. Bangalore’s sun is not very strong most of the year and it is best suited that light is taken from the above rather than from sides.

The telescoping of vaults create a clerestory openings both on north and southern ends with southern clerestory being slightly shaded.

This is achieved by making vaults of two sizes. Two smaller vaults which telescope into a larger concrete vault are made of hollow clay. The clerestory windows are fixed windows with calligraphy grills.

The master bedroom has the patterned windows on the west, and a window seat which allows for cooler breeze from the garden. This rooms ceiling is left unplastered with a motif borrowed from MC Escher. The attached toilet is a combination of black and white with a handmade granite washbasin.

Since the office works with earth as the construction material it likes to experiment different ways of building with earth. For a commercial set up to experiment it needs patronage- Charis were our patron in this home design. So in this home for Charis Biome adopted rammed earth foundation, stabilized adobe walls and soil bio technology method for grey water treatment – all a first for the office.

The foundations were first layered with plastic collected from the surroundings and then earth excavated was rammed for the foundation up to the ground level. The stabilized adobes have been used for the guest wing. Here was a learning that stabilized adobes can be as structurally strong as CSEBs but are a method to be adopted where the dependence and skills required to use a machine can be avoided-thereby easing use of earth as a building material.

Name of the project: Residence for Charis 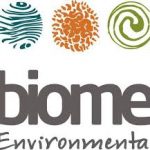 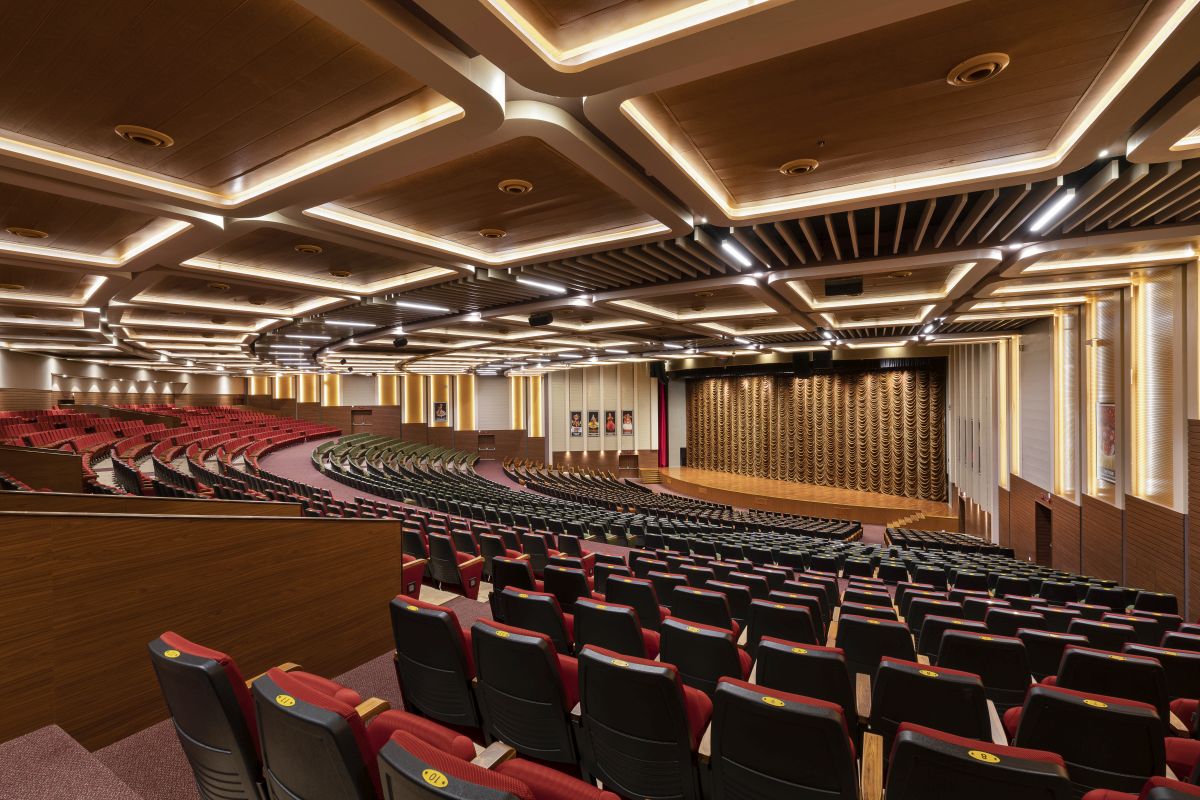 In spite of having designed Auditorium and Seminar Spaces of varied capacities and typologies acroos the country, we still found this project both, unique and challenging.

Unique because this is probably the only large capacity auditorium planned on the top three floors of a seven storey building. This one fact itself posed multiple design challenges which included integration and effective vertical segregation of the auditorium and allied spaces with the rest of the building which houses academic activities on the lower 4 floors. – RMM Designs 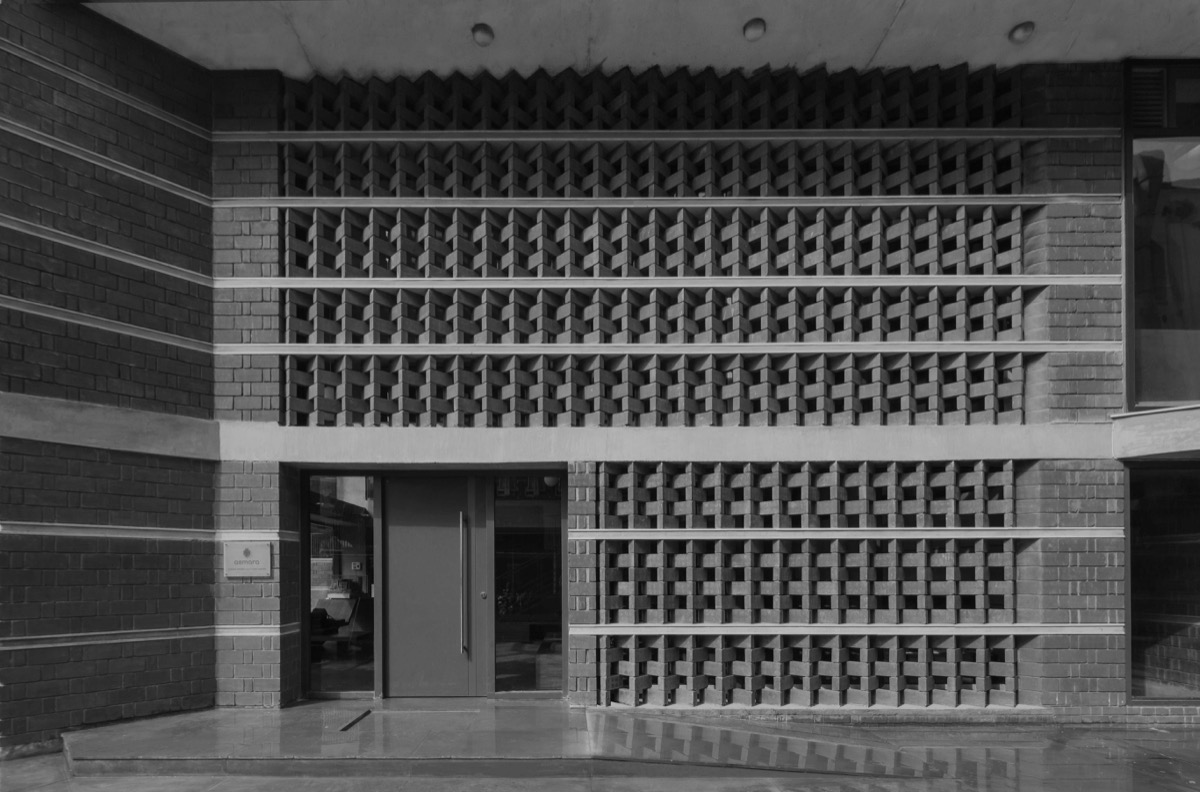 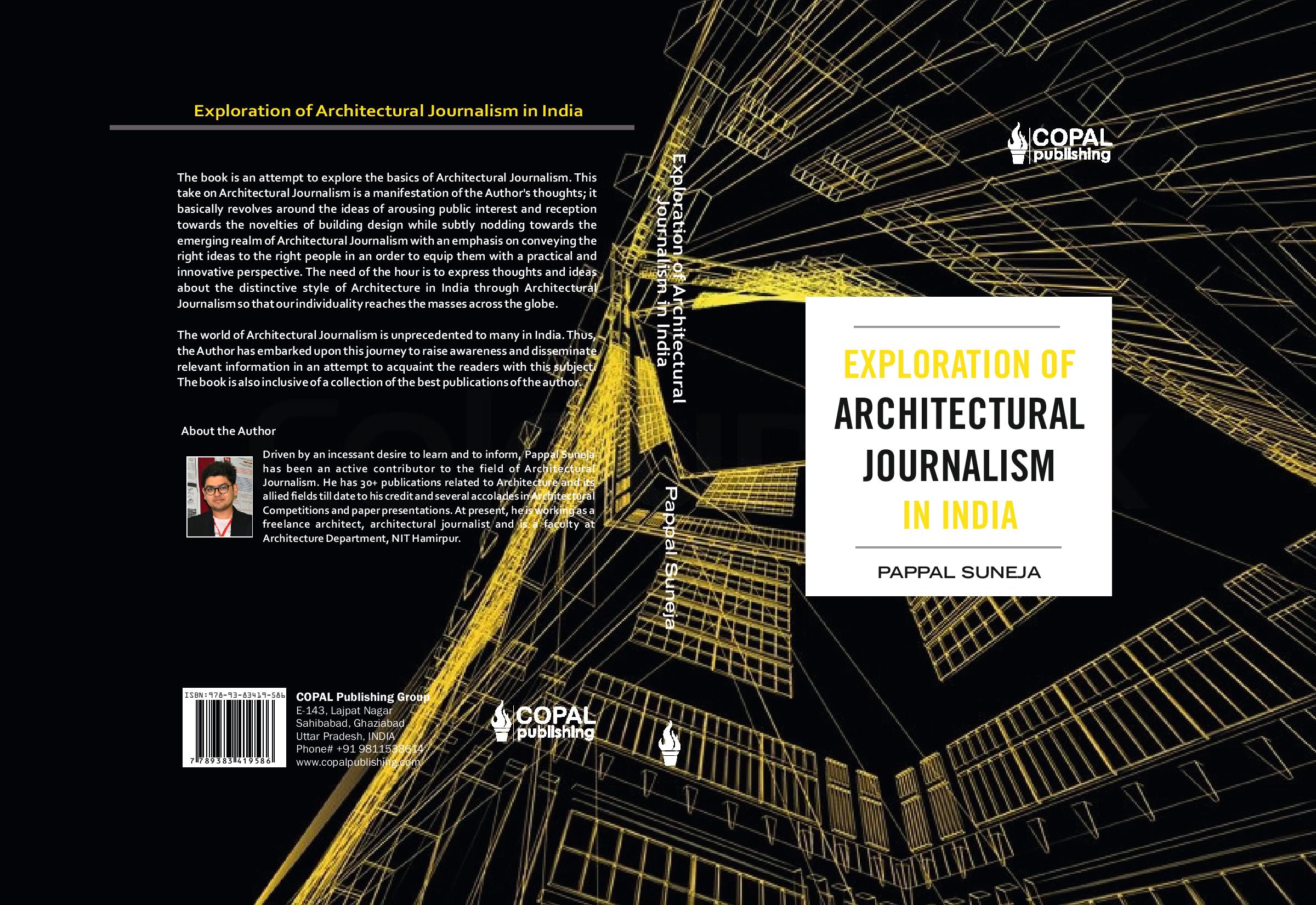 Architectural Journalism, Architect Pappal Suneja explores with a multi-faceted approach the depth and width of this profession within the goals of literary journalism. The Chapters