A lady in a pink saree and a mauve shawl was sat in front of a large sculpted wall, soaking the winter sun with her head bowed. Strangely enough, there are many spaces around this public place designed to relax, but she chose a spot that was not intentionally designed for seating. As architects, we design spaces for use, yet there are uses such as this which is hard to comprehend but it exists as a result of something else. In this particular case it happens to be the Rejuvenation project of the oldest Kali Badi Complex at Mandir Marg, New Delhi 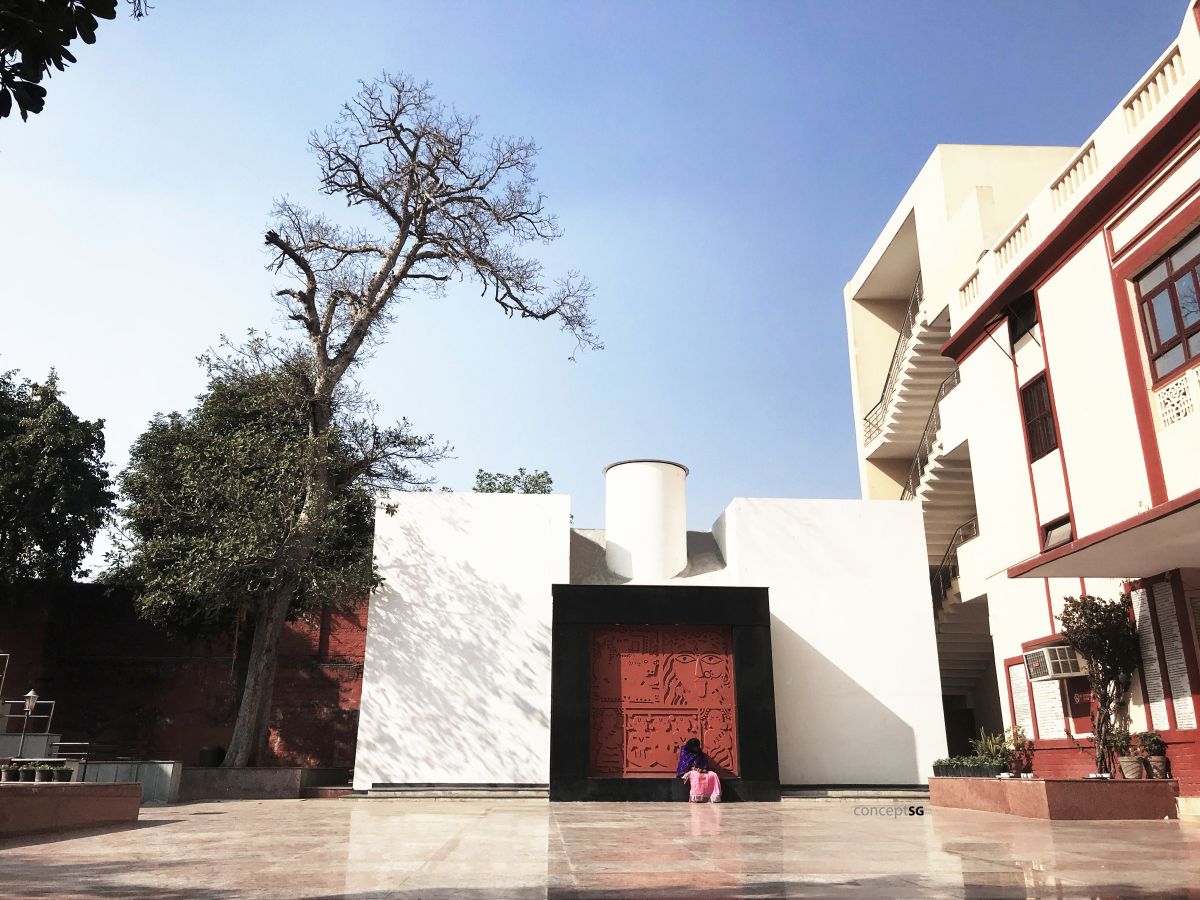 A lady in a pink saree and a mauve shawl was sat in front of a large sculpted wall, soaking the winter sun with her head bowed. Strangely enough, there are many spaces around this public place designed to relax, but she chose a spot that was not intentionally designed for seating. As architects, we design spaces for use, yet there are uses such as this which is hard to comprehend but it exists as a result of something else. In this particular case it happens to be the Rejuvenation project of the oldest Kali Badi Complex at Mandir Marg, New Delhi

In 1914, about 4 acres of land was given by L&DO to the Kali Badi committee for the development of a temple institution. Apart from the usual temple rituals and ceremonies, it is known to host a large gathering for Delhi’s oldest Durga Puja. The complex also offers travellers a place to stay in the heart of central Delhi at a very reasonable price for a max of 2 nights, houses an extensive library of Bengali literature, a small primary school and an art and sculpture space for artists. Since its origin, multiple buildings were built around the main temple and the condition of these buildings had deteriorated considerably with time and hence the proposal to rejuvenate was sought for. This was split in 3 phases – the first to re-clad the existing temple; the second to house a dining hall, 12 guest rooms, industrial kitchen for ‘bhog’ and dormitories; and the final phase to add additional features of an auditorium, nursery school and a new stage to host Durga puja – the main event of the year.

It is often a difficult preposition for an architect to intervene within an existing faith and beliefs of the society. Hence, before conceptualising the task we visited a few temples across India, including Kali Ghat, Tirupati and finally Mahabalipuram, where the search was put to rest whilst observing a few of the 400 ancient monuments. These structures, at a closer look, seem unfinished and signify ‘gods’ performing general humane activities – resting, sleeping etc just as any other being. But, through this school of experimentation is where the South-Indian temples found their style of architecture that has followed ever since i.e. the stepped roof with statues that are sometimes engraved but mostly stuck onto the different roofs and gateways. In his book, Marco Polos mentions the 7 pagodas of Mahabalipuram even though he never visited the site. Such was the resonance/impact of these structures in that era. Later transformation of seeing God in a completely different perspective-‘the almighty’, made the ‘Gopurams’(gateways) grow larger and the shrine ‘mandappa’ got wealthier, as the priest’s and kings arose as a power houses forming a different society altogether. The structures of Mahabalipuram do not have a face to boast about, they do have a heart that pumped the architecture of thousands of Dravidian temples till date but surely they leave a massive trail that needs to be rejuvenated. A thought that gods are not descendants from heaven who possess supernatural powers, but lie in the expression of human imagination. And it is this celebration of such a supreme thought in 6th Century CE that makes these structures unique. 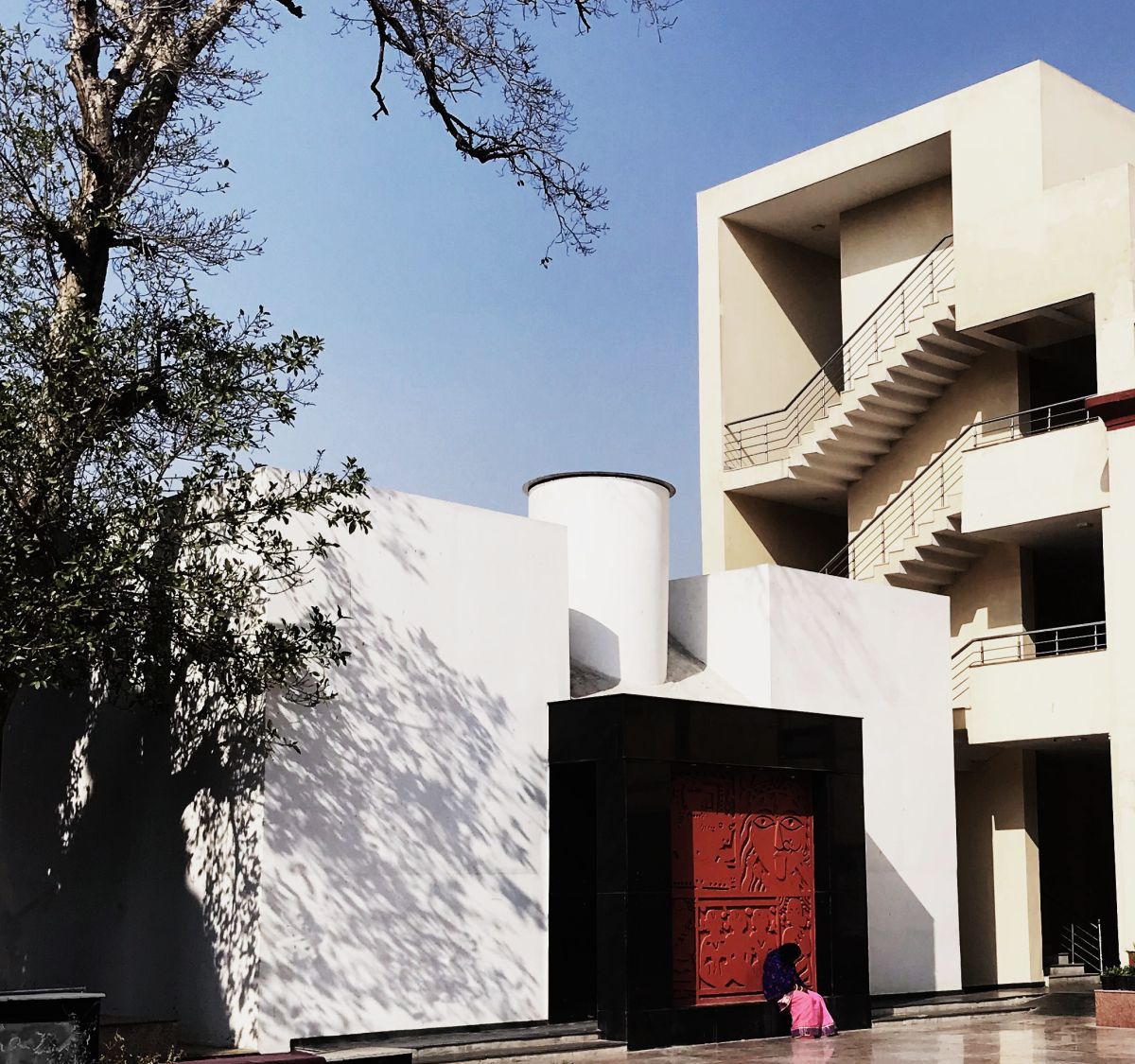 With that in mind- we attempted to start with a thought to deliver something unique to Kali Badi – An idea to develop a narrative human life through the built forms.  With the built Mandir as focused epicentre of activity in this new axis, we placed 2 sculptures on either end of its axis – one signifying birth and another a wall of remembrance. The required functions as built forms then grew around these sculptures. The Vivekananda Building (3rd phase) is designed to embrace the sculpture by scooping out a hollow centre to host an interactive column of light that signifies birth whilst on the other end the Dining hall is set aside the axis as a respect to the wall of remembrance where multiple names of donors are inscribed.

It is the building that houses the sculpture of birth, that which sits as a background to the new stage where the largest gathering for yearly Durga Puja is held. Above which sits a floating auditorium with a comb like windows that form light patterns inside the space. Cultural events were to be hosted in the day as well as night, therefore whilst inside the auditorium one can view the temples ‘Shikhar’ (pinnacle of the temple). Around this main auditorium other amenities, such as a small nursery school on level 1 and a committee room at level 2 are placed.

This building sits straight in front of the second entrance. At the centre is a black frame to encase a red art composition depicting human activities and the face of the kali goddess as humane gestures, prepared by a local artist. Behind this focus attraction is a dining space of 5m high ceiling with comb like slits at the back. The space is ventilated by inducing natural air currents from the cast shadow of the hall itself towards its backside where the cool air is dragged into the dining space through the lower level openable windows in the comb like slits. This cool air flows through the space before exhausting through the cannon like structure in the ceiling at the other end which acts as a natural chimney. This chimney plays a double role – inducing air currents inside the space and formally aligns the centrality of the building with its art work and the entrance that can’t be missed if you’re driving past the site.

Previously, the site hosted a few temporary structures which were demolished to house proper public facilities such as industrial kitchen and public toilets.  On the levels above, a guest house with 12 rooms stand behind the existing library block and these rooms look towards ‘the ridge’ – the protected Delhi green belt, each with 3X4m windows. It provides a peaceful stay, away from the daily hustle and bustle of the temple visitors.

To make this possible right in the heart of Zone D, central Delhi, we required clearances from multiple authorities – NDMC, DUAC, DDA, Fire and other departments which took a while. We had encouraging words from all of them and as much as our team, they waited for the completion of the project. It was quite an experience, as we often hear many stories how difficult the exercise can be, but we learned, when the intentions are genuine and a path towards a meaningful architecture is transparent, then the support for such exists in abundance. It surely wasn’t the largest project, neither an extravagantly expensive one in Delhi, but our team felt increasingly humbled along the way. 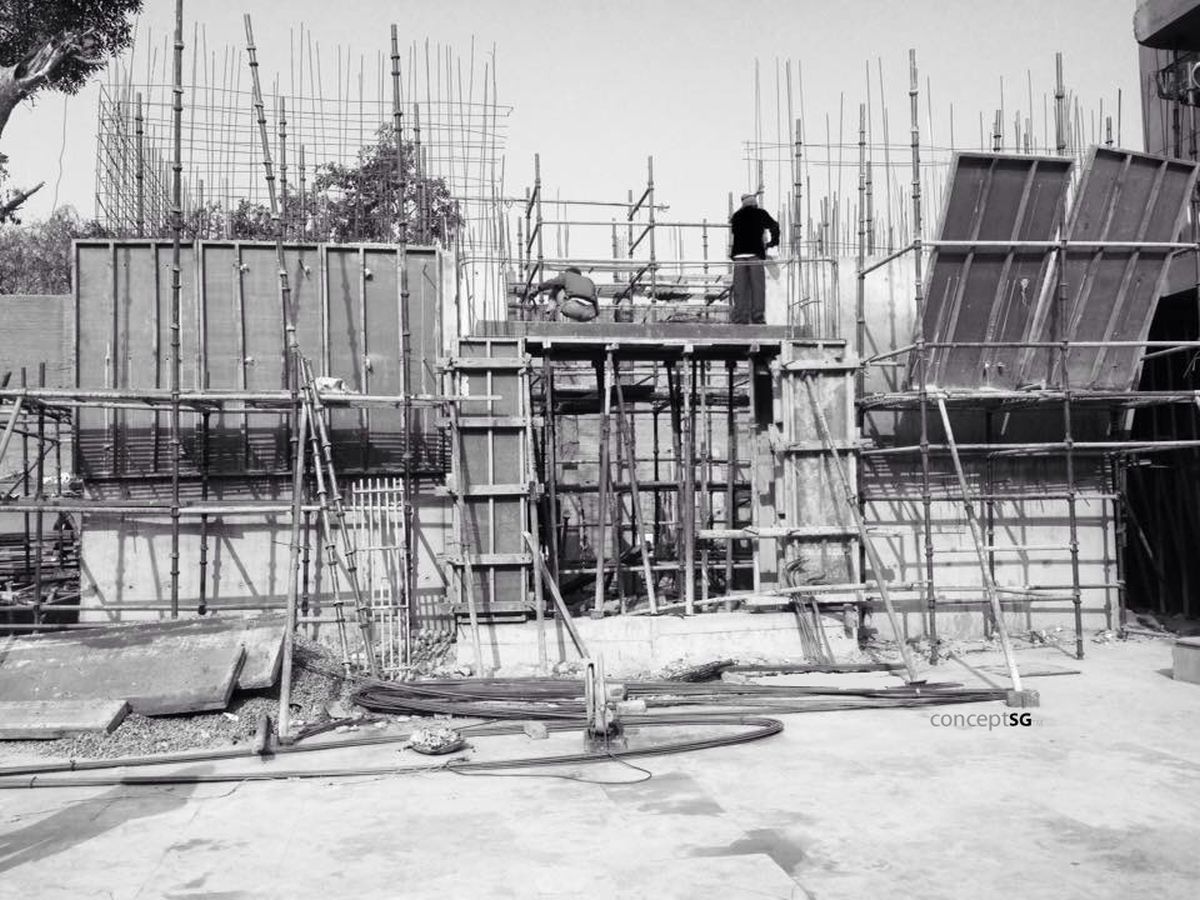 The first phase of cladding the temple with red sand stone was a no brainer to improve from its previous repetitive painting job done every year. It matched perfectly with the red kali temple and the execution went ahead. However, the second phase of the entire dining hall in concrete was an unexpected challenge. There have been many concrete buildings in Delhi post Corbusier’s intervention in the 1960’s. But today, although the concrete industry has improved leaps and bounds for large scale construction industry of highways or bridges – small construction companies have forgotten the skill. It was a tough but fruitful challenge to work with an inspired contractor and walk together, step by step, of concrete construction. To add to the challenge – the entire building was constructed at night as heavy vehicles were not permitted in the central zone during the day. From bespoke metal shuttering to cast the central chimney to bespoke treated ply shuttering for the walls, everything moved according to plan until we found that the edge on top wasn’t up to the mark and eventually painted it similar to our original rendering i.e. white – it lets out a glow in the summer sun with the bright red sculpture framed in black granite at its centre. 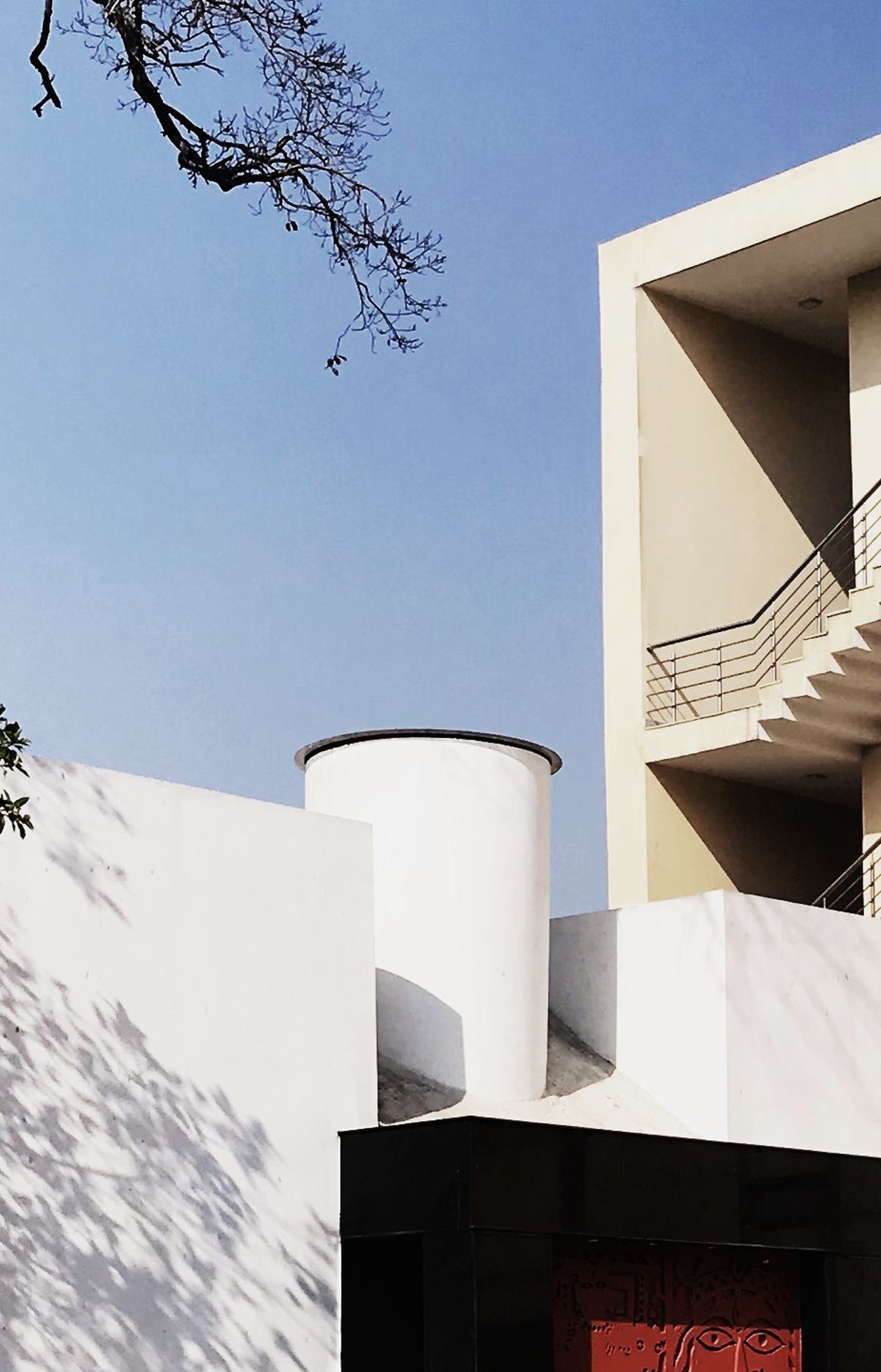 What makes it different?

If we take a relook at the images of the new buildings in this temple complex, we observe that it does something different than the usual buildings in Delhi. We are used to seeing buildings with standardised elements such as 7 feet doors, 3ft windows, prominent centralised entrances and canopies of a certain height and scale, but when these stereotypes go missing, we find ourselves often lost to categorise them if what we observe is a gallery, an office, a housing or retail building. The moment we break away from the standards; it is perhaps a starting point of something new. One then starts to question; which you’re possibly doing so now if not at the first glance; how does one enter the dining hall? What is the function of such a building? How does this building breathe? We choose not to answer some of them, to encourage the reader to experience the space themselves, for architecture speaks to us more in volumes than any other medium.

The project such as this, is a result of bringing together a team consisting of a borderline optimist architect, skillful engineers, a willing contractor, a visionary client (who unfortunately passed away before the start of construction) and a team of very committed individuals, who believed that in contemporary realm where buildings speak out loud about its economy and functionality; there is still space to ask questions beyond the rationale, for the much needed search of a better landscape.

The fundamental concept of a project such as this was to rejuvenate a supreme thought we possessed in 600 CE: thinking towards a society that believed ‘gods live within the art of creation in the form of human expression‘ – that which has given us reasons for celebrating human ingeniousness. Rabindranath Tagore once said – God finds himself by creating. 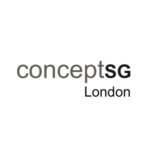