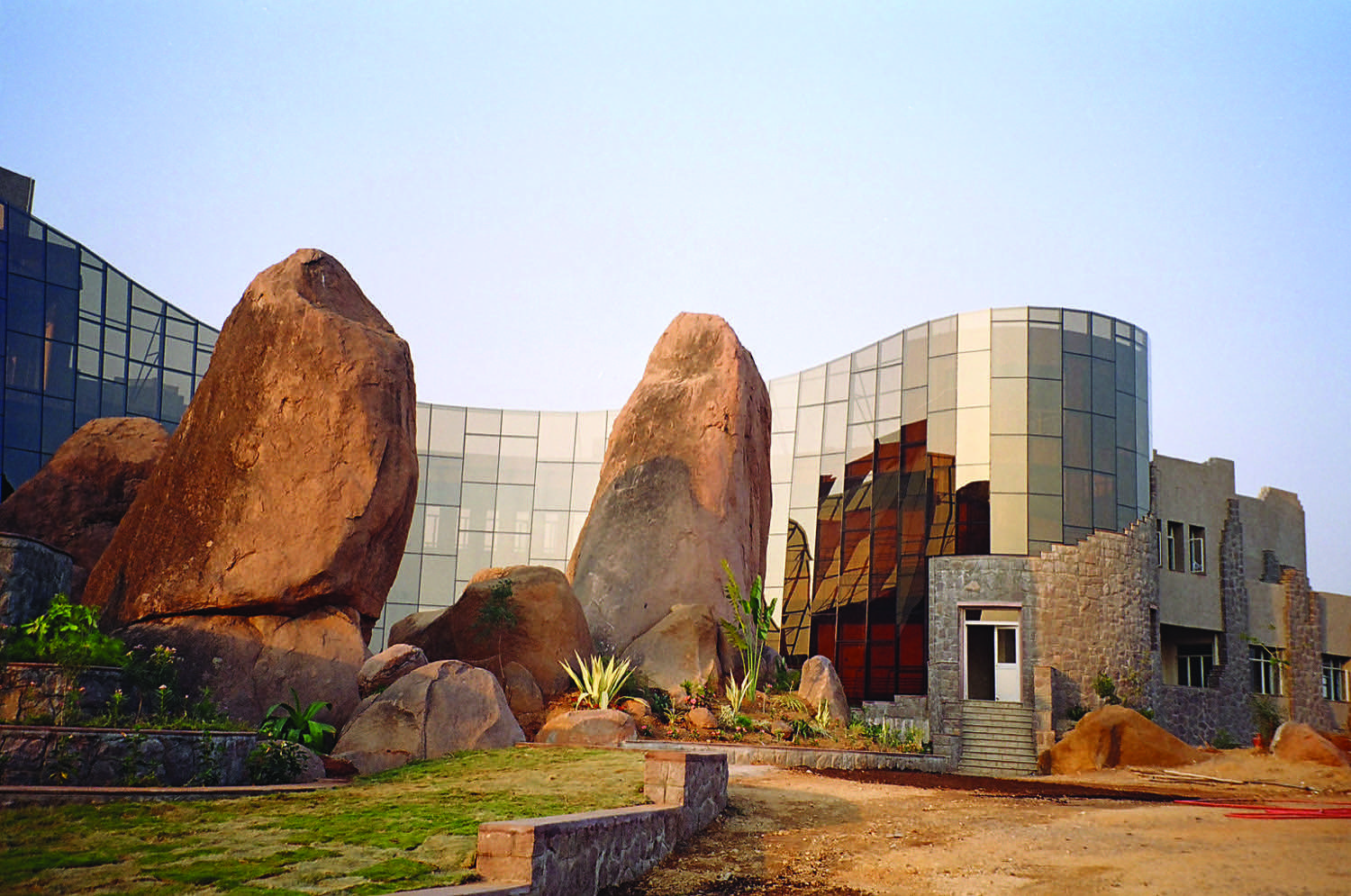 Laboratory for the Conservation of Endangered Species, Hyderabad, Shirish Beri

“Shirish, I would like to show you the site for a unique project ‘a laboratory for the conservation of endangered species (LaCONES). There are very few such institutes in the world.” – Said Dr. Lalji Singh, eminent scientist and director of the reputed Centre for Cell and Molecular Biology (C.C.M.B.) during one of my visits to Hyderabad. 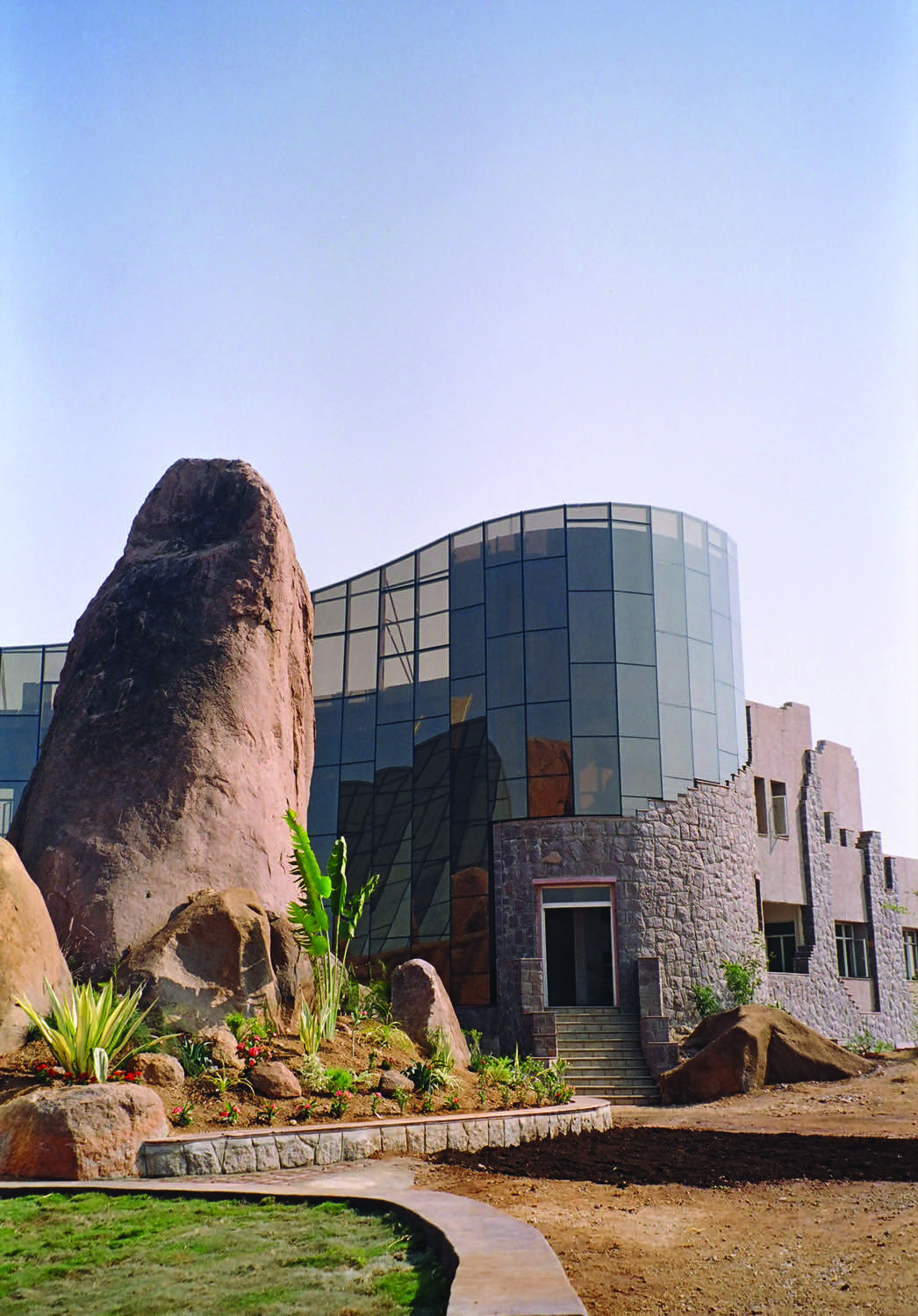 My visits were in connection with the design of the Centre for DNA Fingerprinting and Diagnostics (C.D.F.D.), where I had the privilege of explaining my C.D.F.D. design to Prof. Watson, the Nobel laureate who discovered the double helix structure of the DNA along with Prof. Crick. The undulating, wasteland site with telltale signs of exploitation, was 400 metres off the main Attapur ring road. What caught my attention amidst the numerous boulders strewn all over was a cluster of huge rocks’between 6 and 11 metres tall. An immediate empathy arose. ‘Why did those rocks in the corner of the site beckon me to start a dialogue with them” I walked up to them, touched them, felt them and heard them ‘Did I hear their deep, silent hum resonating across a few million years” During this encounter, I asked myself, ‘Can this wonderful natural heritage be preserved in its original form instead of allowing it to be broken into thousands of small commercially saleable commodities” When asked, I was told that this cluster was at the very edge of our property, beyond which was a rough undulating terrain that belonged to some farmers. I was so enticed by these rocks that I requested my government clients to acquire this additional land from the farmers by giving them a better flat piece of our land in exchange. Then I pondered… “Can our new man made design live in harmony with these natural rocks And, can they enhance each other through their fused coexistence?’’ Happily, the farmers agreed to exchange this land around the rocks to us.

So during my next visit to the site, I set up my butter papers, charcoal and drawing board amidst the thorny shrubs between these rocks. Being a difficult site with a strong context, it was very important to make design decisions, review them, check them out there and then at the site itself. I worked there for three days to evolve my first conceptual sketch, where the rocks became the focal point of the entire building. I somehow felt that this building had to be almost a non building in the conventional sense. A non building given the use of broken stone masonry evoking a ruin-like quality and the use of ephemeral glass which dematerialized the elevation with the ever changing reflections of the rocks, sky, clouds and the garden. The large glazed surface allowed people walking along the inside passage to view the rocks from diverse angles. A buffer zone of service functions like toilets, a.h.u.s and stairs separates the air conditioned labs from this passage, thereby reducing the heat load on the air conditioning. Besides this rapport with the rocks, the building is designed by respecting the existing contours. There are two extra floors from the rear. Not a single stone was imported from outside our site for constructing the building walls, the compound wall, the roads and so on. Only the stone obtained from this site was used, thereby reducing the embodied energy of this construction.

A very interesting incident took place during the inauguration of this building. Dr. Abdul Kalam, President of India was invited to dedicate this facility to the nation. For security or whatever reason, I was asked to be seated along with other invitees outside in the pandal till the President, the Governor, the CM and other dignitaries were shown around the building. They came back and speeches by different dignitaries on the dais commenced. When Dr. Abdul Kalam stood up to speak, the first thing he said without addressing the gathering was,

“Is the architect of this wonderful building present today? I would like to meet him. He has created a design that is conducive to good scientific research. The scientists will enjoy working here.”

Then he started his speech. I met him later when he congratulated me. Dr. Shivaji, senior scientist-in-charge of LaCONES commented,

“Apart from the unique concept of the building taking shape with the four permanent rocks, the greenery which has been developed in a creative fashion in between the rocks and behind the canteen has attracted almost every single visitor to LaCONES.”

This building, designed as a homage to our natural heritage, has been widely publicized here and abroad. Besides winning a number of national and international awards, this design has created a new awareness towards conservation of rocks, Nature and sustainable design. It is joyous to work in close proximity to the ancestors. In today’s ecologically critical times, it may be the only scientific facility in the world that would conduct research on artificial insemination and reproductive biology of such diverse endangered species as carnivores, ungulates, primates and birds. 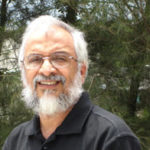