PURIFICATION OF WATER AS MEMORIAL……….in memory of victims of BHOPAL GAS TRAGEDY

To build would be an act of arrogance. 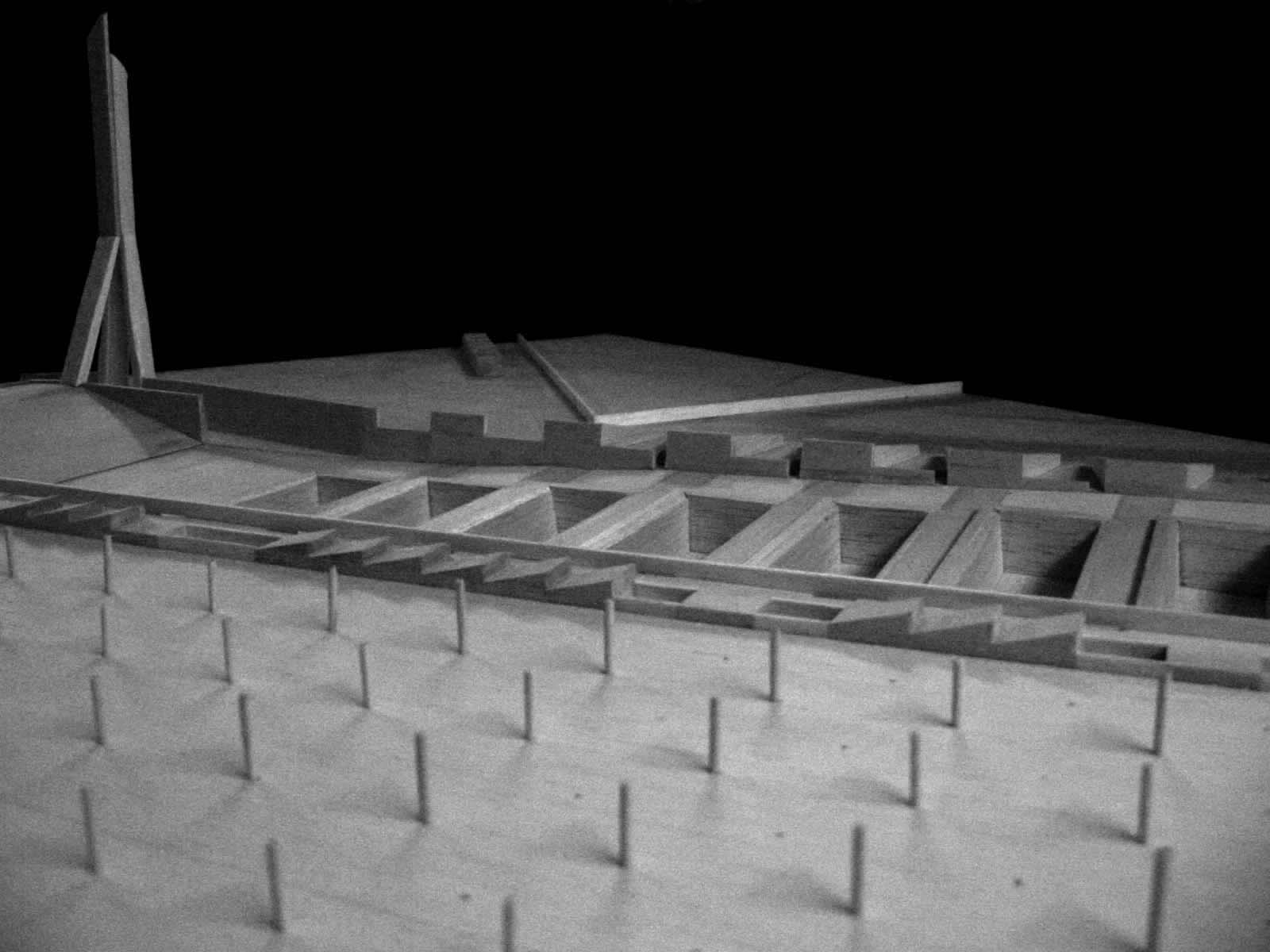 Could this arrogance transgress the mundane and address a mutually meaningful subsistence towards creating a memory, in perpetual transition, reminding of the past while creating something anew.

Could we recreate some life on a barren, toxified site that bears testimony of the dead and decayed life forms? Could the semblance of a memorial travel beyond the purview of a built analogy towards an ever-present and consistently growing phenomenon.

It is within the ambit of such realizations that we seek to recreate and rejuvenate life once again. The thought of enlivening the site stemmed from the much toxified site itself, of introducing a reversal of site conditions. From a notional to a more pragmatic approach, towards creating and building a memorial for the gas victims.

A process which continues beyond the physical boundaries of site, substituting the stagnancy which has set in over the years, a process which brings with it a new narration, new aspirations and inculcates a new sense of belief for a better future ahead.

It is from such a stand point we propose the memorial as a water purification plant, which decontaminates the water from all its toxic elements, into pure water. To set these in order we propose to draw water from the site through a grid network of borewells dug deep, and channelise them through a series large water tanks, sucessively purifying it by stripping it of heavy metal and VOC contents. The gird also stands to extend further to tap such contaminated water beyond site boundaries.

Considering ground zero as the highest level, these tanks are set into the ground progressively rising from the lowermost contaminated tank to the uppermost tank of decontaminated tank, eventually encircling the pavillion at ground zero with a mass of pure water.

The experience of the site as one enters is, contemplative and compelling, trying to reason the audacity of such large water pools, suggesting essentially that the water purification plant is the memorial for gas victims. It is in this metamorphosis from the metaphysical to the more pragmatic interpretation, that the memorial seeks its presence and continuance. The memorial in its inception is not a static manifestation of an architectural form glorifying and or imperiously subjugating the tragedy of the event. Conversely it seeks to anihilate the past and restrain, contemplate and move on.

The pavillion as it sits over ground zero, maintains a stoic silence bearing the foot prints of the actual plant cut above the ground level as a frozen mass, sympotomatic of a burried past in a mass of concrete at its surface level. Wrapped around from over with a tensile roof in white, it bears a testimony to loss of humanity, a cenotaph for all the gas victims. This pavilion sets ground/platform for multi dimensional activity, showcasing social and cultural issues allowing engagement with the city. At the same time it remains neutral and calm in its nature in absence of any activity, maintaining the serenity of its presence and purpose.

Contemplation of an industrial aesthetic

The typology/proportions/scale/texture/grain of the built language is a primary derivative of industrial zone, and it actsas deter minants for the water ponds, the concrete panels forming the road and the walkways, the  co rridors punctuatedwith openings overlooking the water ponds, the plaza formed after one insinuates gradually down the slope of grass mound.

The two long retaining walls rise above the water as continuation of tank slopes, constituting the trough which contains all the water ponds, with large sloping grass mound at the  entrance end and the pavilion at the other higher end.

The long corridors along the retaining wall on the east structurally comprise of north light truss frames, housing
administrative functions, information center, administration, cafeteria, service departments, NGO offices, library and conference areas. Few spaces underneath these frames are retained in their emptiness to allow and add future probabilities as the need may be.

The external landscape in the non buildable part of the site is in the form of a grid network at every 20 meters, with alternate nodes for borewells and trees. These borewells would constantly draw up water and pump into the tanks for purification process, while the trees help absorbing the toxic elements from the earth, thus reducing and purifying the same.

The far end corners of the site are converted into water catchment areas for all surface water of the landscaped areas.

These would be further pumped back into the main filtration and purification process along with the main plant.

As a symbol, as a landmark of the memorial, for the city of Bhopal.

The north west portion of the site constitutes the solar farm, with installation of series of photo voltaic panels, tapping the enormous energy resource from sun. Power thus generated would be used for operating the plant, attempting to make the site long term self sustainable of its electricity requirement.

Water purification plant as a model

We also propose to moot this conception of water purification plant as a model, to be adapted and used in/for industrial zones, with a conscious attempt to look upon these as public spaces also than just as functional requirement.

it was my need
I grew it, I nurtured it,
but it grew larger
larger than I imagined,
till one day I realised,
it outgrew me.
I let it that way,
Could I have stopped
That way,
Or some otherway
Wish I could once again
Grow it,
And nurture it,
And make it large…….!!!!!

Union Carbide was a natural progression of the process of industrialization, and it was meant to alleviate some of the dangers posed to the agricultural economy. That we (humanity) paid a price in its name is the result of a collective callousness that we have let persist with activities that are industrial in nature. Our priorities have always excluded simple safety concerns and we have always overlooked these as impertinent part of our lives. “Union Carbide’s ” will continue to remain our need, and so would continue all the related hazards if we continue to choose to ignore the fact that we will always oscillate between the two. 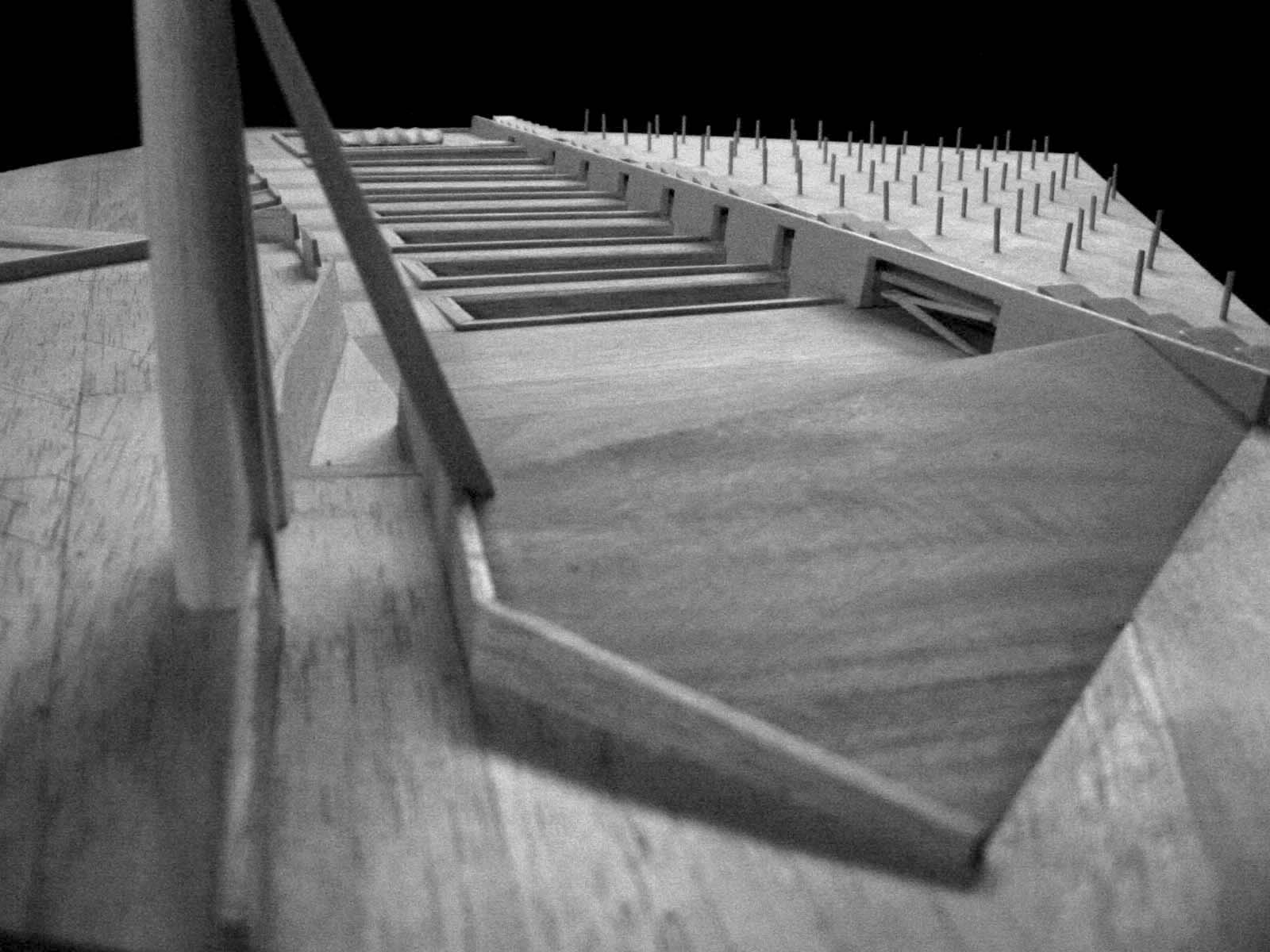 The act of contamination is as rampant within the confines of the city as much as they are in the industrial zones. Natural reservoirs and lakes continue to be polluted, while we seek technologies to purify the same before supplying it back to the city.

We have chosen to address these issues from a larger perspective of the city and its growth, city and its people and not just delegate it to the nuances of adhering to industrial policies and acts.

Our architectural intent is to propose a Water Purification Plant, on the site where stood Union Carbide, in memory of the victims of the tragedy and as much for the city itself. We seek a natural progression of this idea from this site into the collective purview of development issues for the city and its people. Subject to adaption this must serve as a model for many such plants within the city and its confines, industrial or non industrial in their nature, serving as public spaces, subverting the notion of water purification plants. 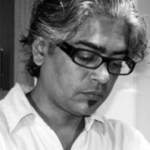 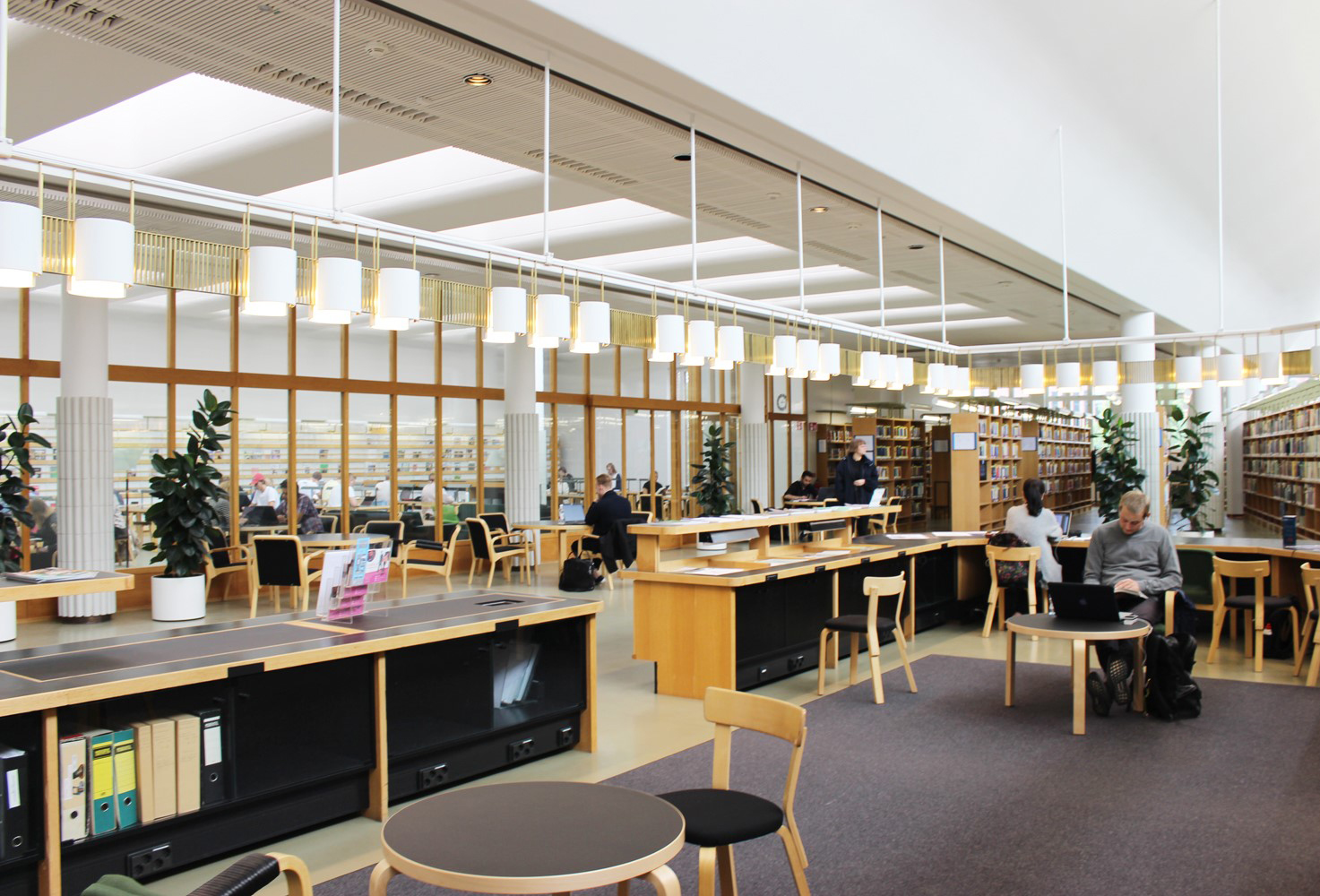 Globally, the concept of designing libraries has been witnessing a revolution. In the following piece, Ar. Apurva Bose Dutta, who recently visited Helsinki and Espoo as a part of a four-member Indian delegation for an Architecture and Design Media Visit, on the invitation of the Finland Government, writes about some of the libraries she visited there. 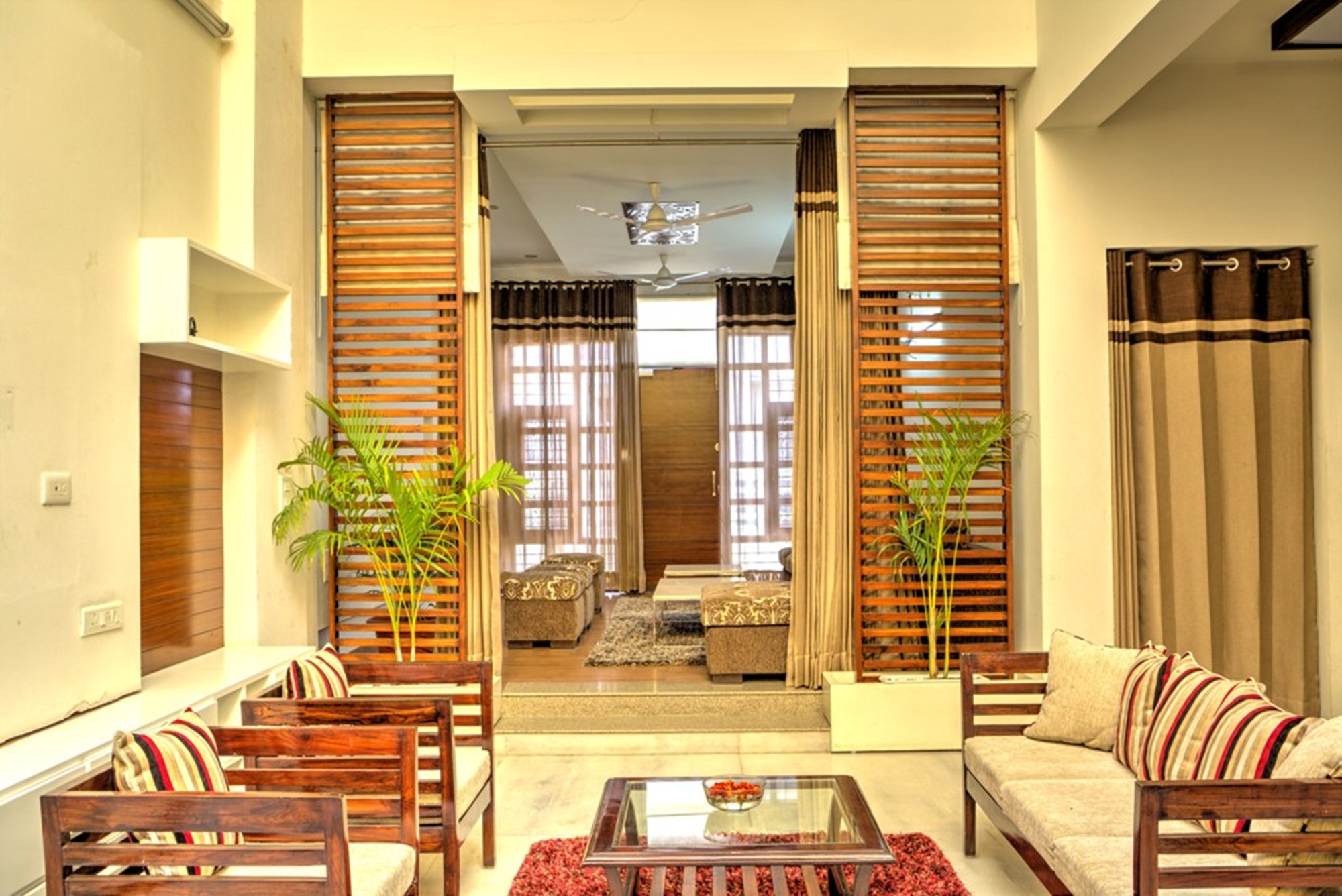 The site sat within a plotted development in the heart of Panipat. Facing west and adjacent to built structures on both sides, there was a 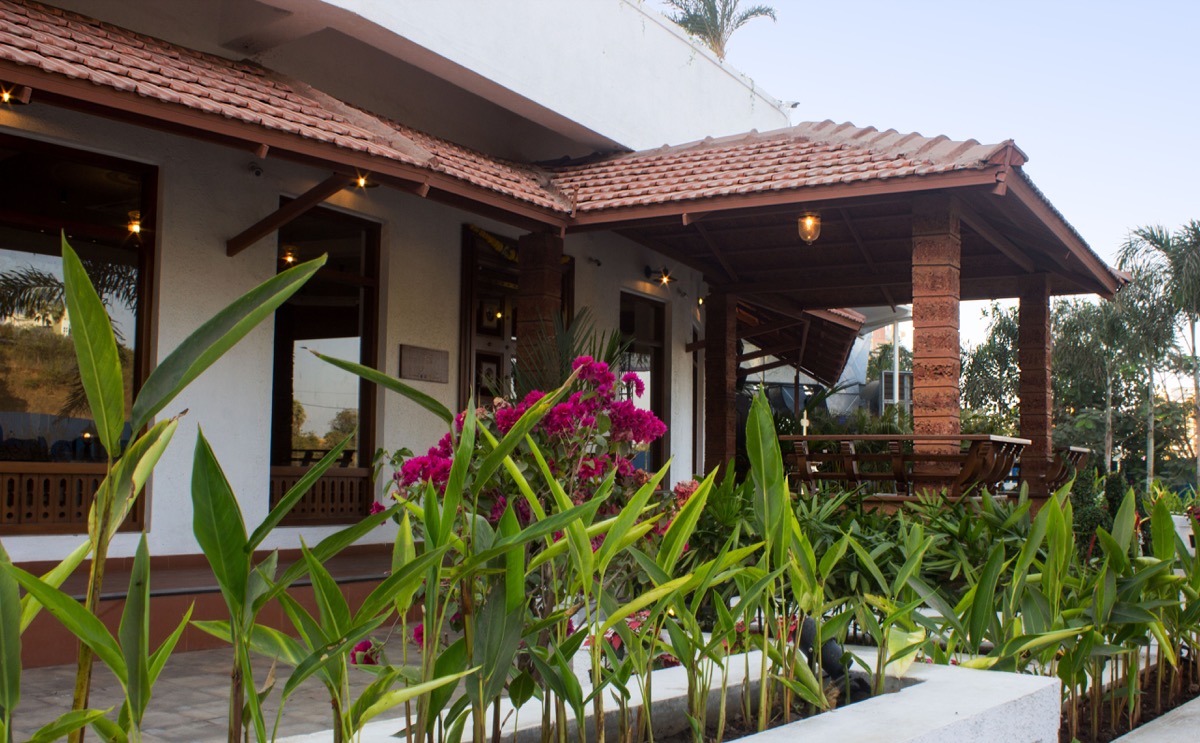 The brief was to design a fine dine Kerala cuisine restaurant. The clients being a Malayali aspired for a very Kerala home ambience and feel. Working closely with the clients we listed down the common aspects of what Kerala homes are all about i.e. the landscape,materials,design,spaces ,ambience ,colours,etc.